The difference between genocide and denationalization 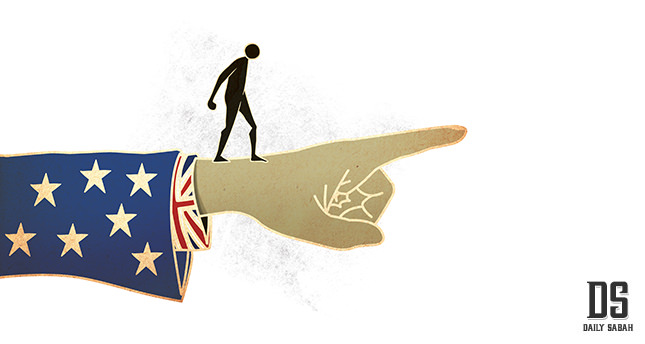 The so-called opposition of Armenians today to the Turks, which is, in fact, quite contrary to the traditional brotherhood established in Anatolia in the Ottoman times, is an Anglo-American success

Before the advent of the word "genocide," Anglo-American literature on international law described the action of a government that revokes the official status of its subjects as denationalization. It meant that whoever betrayed the allegiance to the nation was rendered stateless.

After World War II, the term "denationalization" took on different meanings. It has been used in reference to the procedure in which a state ceases to own industries and properties or it might even express the idealistic vision of abandoning the in-group mentality of nationalism for the sake of world citizenry.

However, when the Ottoman Empire disenfranchised many of its Armenian subjects in particular areas of its territory as part of defensive wartime considerations in 1915, denationalization was the most fitting term one would use to denote the Armenian loss of state protection, as the Ottoman government was struggling to protect itself from the invasion of multiple foreign forces.

Denationalization was seen as a legitimate practice because it was anchored in state law and intended to pwromote the sovereign's safety and the national's loyalty. Article 6 of the Ottoman Law of Nationality from Jan. 19, 1869 states that the Ottoman Empire reserves the right to nullify the subjection of those who change their nationality or join the service of a foreign military.

Such laws toward a people's statelessness were issued in the Western world. For instance, a U.S. law enacted on March 3, 1865 declares that all persons who desert their military or naval service will be deemed as having lost their citizenship. Moreover, in the name of functional governing, the U.S. officially sought to keep Native Americans in a stateless condition. For example, this is articulated in Article 3 of the treaty in which Russia sold Alaska to the U.S. in 1876. It says that while the inhabitants of the territory have the option of returning to Russia or becoming citizens of the U.S., this does not apply to the "uncivilized tribes" who were not to be recognized as nationals until further notice. Similarly, according to a May 6, 1882 law, no American court was allowed to recognize the Chinese as citizens of the U.S. As late as the 1920s, Indian immigrants in the U.S. were denationalized, and even their American-born partners became stateless simply because their "blood" disallowed them from being considered "free white persons."

During World War I, both Britain and France enacted laws to denationalize naturalized citizens whom they suspected of possibly posing a threat to the safety of the state. Britain's Nationality and Status of Aliens Act from 1914 stipulated that certificates of naturalization may be revoked if people are found to have traded or communicated with the enemy at wartime. France had already enacted a law of denationalization in 1848 as punishment for slave trafficking, and there was no protest noted when a French law from April 7, 1915 looked to protect the state against anti-national activities by making it legal to denationalize any naturalized citizen who either bore arms against France, aided its enemy or left the country to avoid military service.

Domestic laws were put in place to protect belligerent states from treason. Britain and France were legally prepared to do the same as the Ottomans did, but they never needed to denationalize entire ethnic communities. The Ottoman state was defending itself against those who sought to conquer its land. The Battle of Gallipoli took place in the Dardanelles, not in the Strait of Dover.

While Britain and France enjoyed the ability to exploit Ottoman Armenians as a fifth column for results on the ground, and as Christian victims for results in public opinion, the Ottoman rulers were forced to de facto denationalize Armenian communities en masse. Nonetheless, it was not indiscriminate denationalization. Only Armenians in areas in Anatolia where cooperation with the enemy could have facilitated the foreign conquest of Ottoman land were denationalized and sent away unprotected. Ottoman officials were facing an extreme case of the exact situation for which laws of denationalization were made.

Following World War I, the winning side began to institute legal language that described denationalization also as the destruction of a national pattern. Accordingly, it would be considered a violation of international law if groups of a national affiliation were shown to have been culturally denationalized by a state as part of a policy to homogenize its population.

Significantly, in a 1919 report titled "Violation of the Laws and Customs of War," the Carnegie Endowment for International Peace – in whose later publication the term genocide made its first appearance – announces that Ottoman Armenians were deported and massacred, but does not consider the Ottoman government to have imposed its national characteristics on the Armenian population. Instead, the Bulgarians are said to have attempted this form of denationalization on the Serbian inhabitants of an occupied territory. Thus, as the meaning of denationalization started to evolve toward the invention of genocide, those who produced selective yet influential information about war crimes did not even try to pretend that the Ottoman state had an agenda against the very "Armenian-ness" of its subjects.

In sharp contrast to the denationalizations of World War I, the Nazi laws of the 1930s exhibit a unique deprivation of legal rights against Jews and other non-Aryans under a racial ideology and during a time of peace. The nationality of German citizens was withdrawn by their government in keeping with the Nazi regime's beliefs about race. German nationals who did not even consider themselves to be Jewish were suddenly informed by German legislation that they were of this affiliation if they had two Jewish grandparents. Ultimately, the Nazi government went far beyond denationalization, and during World War II it carried out a policy to gather and exterminate European Jewry.

Genocide was designed to serve the U.S. government in its efforts to establish military, economic and moral control over Germany once World War II was over. In the famous book that was published under Raphael Lemkin's name – but not written by him – in 1944, the emphasis was not on Nazi Germany's treatment of its own nationals. Rather, as the full title of the book "Axis Rule in Occupied Europe: Laws of Occupation, Analysis of Government, Proposals for Redress," suggests, there was such a preoccupation with the idea of occupation that both the noun "occupation" and the verb "occupied" are mentioned. In addition, each of the book's three parts has either "occupation" or "occupied" in the title. The term genocide is first explained in the context of a "synchronized attack" for the "extermination of nations and ethnic groups" by the "invaders." Meaning that in this book genocide relates to Nazi war crimes in occupied territories such as France, Luxembourg and Poland. It most certainly did not address circumstances in which a government denationalizes members of a group whose leaders had engaged in revolutionary activities for several years and colluded with invaders during a war.

Not only was the Armenian case irrelevant and non-existent in the original text on genocide, it presents a case of denationalization in which the people who lost their legal status and became stateless refugees during the war were of a group whose leadership had already undergone a process of denationalization by a foreign power. Since the major cultural revolution that was instituted by American missionaries in the 1840s – before World War I or even the first reported set of Armenian riots and massacres – some Haik people in the Ottoman Empire were essentially de-Haikized and de-Ottomanized as they were turned into Americanized Armenians. The Protestant doctrine under Anglo-American guidance had given them a new Armenian national purpose and prepared them for service of Anglo-American interests during World War I.

The case of an unfortunate denationalization by the Ottoman government is prominently featured as genocide, thereby pointing at Turkish criminality and denial, because the Anglo-American imperialist union that used the Armenians in World War I won the war and has since dominated the writing of the war's history according to its interests.