Has Ankara really struck a great deal with Brussels? Or has it given EU leaders a poisoned chalice? 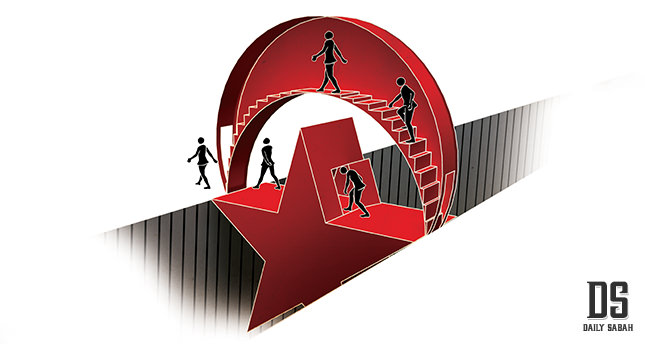 Turkey must be wondering now if this too-good-to-be-true deal is really going to deliver. If it fails, will the EuroDisney house of cards bring Turkey with it?

I can barely believe what just happened. In fact, the popular 1990s hit "You're Unbelievable" by EMF was ringing through my ears as I watched the video clip of the Prime Minister Ahmet Davutoğlu being flanked by two grinning cheap suits in Brussels. Turkey has pulled off a master stroke and finally achieved the impossible. It has turned the tables on Brussels and proved that the EU needs Ankara more than Ankara needs the EU. Of course many press room wasters in the EU capital have known this for some time. Brussels is a corrupt elite made up of around 40,000 highly paid civil servants, run by an unelected old boy's network of pan-European freemasons who do a pretty formidable job of keeping themselves in jobs. But their one fear that keeps them awake at night is described best as the old Dutchman who falls off his bicycle and who can't get back on it. Momentum of the EU project, or lack of it, is the greatest fear that worries them most.

But since the U.S. housing crisis of 2008 and the inevitable demise of the euro, the project has been on very shaky ground.

And so being seen to be busy is crucial. In many ways, the refugee crisis is a gift for those who crave the attention but is also a double-edged sword. European Commission President Jean-Claude Juncker, a Luxembourger so bereft of personality that he makes a pile of damp towels look more exciting than free cable, called the agreement struck with Turkey a "game changer." But seasoned EU watchers will note that at a time when the EU faces collapse- with a U.K. referendum scheduled for June and an "out" vote likely to have a devastating effect on the entire circus - Brussels can't afford to mess up the refugee issue. Already the very foundations of the EU itself - the coveted Schengen immigration accord - has been shaken to its very roots.

If the EU is seen to give Turkey $6 billion, which is then used as a sort of bribe for creating an external immigration camp outside of the EU - but then refugees still enter in great numbers or even those who should be returned can't be rounded up, then perhaps credibility in the wobbly project will finally collapse entirely. The chiding from U.K. eurosceptics this week that Brussels is being "blackmailed" by Turkey will hardly need to be heard. EU mandarins can hardly expect the illusion that Brussels has a valid purpose any more if it gives away 5 percent of the entire EU budget to a country that it has scorned for years for having shoddy human rights - only for that money to not do what it is supposed to do.

Let's be clear about what is going on here. Junker, Tusk and Schulz could hardly hold back their joy this week in Brussels when posing for the cameras with Davutoğlu as the deal struck was going to save their necks. The Turkey deal is all about saving the EU.

THE RETURN OF APATHY ON REFUGEES

If the EU loses Schengen and can't control Syrian refugees, it's the end of the EU as we know it.

But the irony, like Lebanese garbage, seems to be getting piled higher by the day. A completely unelected, backward, corrupt institution that has no genuine regard for human rights whatsoever and has no accountability of its own actions or spending, which arrests journalists on trumped up charged and destroys its own whistleblowers - I'm talking about the EU - has been treating Turkey like a third world African country for years and holding up human rights "abuse" as an ace card to justify why it can't join the elite club in Brussels. But now, apparently, for the most powerful important three people in Brussels to keep their jobs and their superstar lifestyle, they've suddenly seen Turkey in a new light.

And for all those years, it was the sparkling, whiter-than-white European parliament which hosted Turkey's leaders and waved the finger and tutted. But wait. Is this the same European Parliament which also has no accountability to its voters and is the only assembly in the whole world which cannot propose legislation - as it is a parody of democracy created simply to rubber stamp the more powerful European Commission - which is now in the news for its criticism of the deal?

Yes, hard to believe that the European parliament was not only not properly consulted on the deal but is now the only objective voice to question the validity of it. MEPs last week, sulking that they were not part of the process and were bypassed by their European Commission masters, have pointed out that the deal is not even legal. It shows what shocking and extraordinary contempt the EU has for its own fake parliament though when something so important gets left off its radar. The European Parliament was never meant to question or hold to account anything the EU does, but merely nod in approval.

But MEPs and human rights experts might be right. But their views are not relevant as the EU doesn't operate on this level of merit or accountability. It's not really interested in international laws. Its main focus is survival at all costs. And it chose Belgium, a country marked in the annals of history for corruption, chocolate and satanic pedophilia on an industrial scale.

Just this week, the infamous Belgian child murderer and pedophile Marc Dutroux was in the news again. And it reminded me how corrupt Belgian is as a country and how well it is suited to host the EU institutions whose absolute control over around 1,200 European journalists is as shocking, if not more, than Turkey's takeover of its main opposition newspaper - a subject which has been airbrushed out of picture in Brussels both by the cheap suits and by the call-center journalists who dutifully turn up at EU commission press briefings each day, ready to turn into copy the press release fodder they are handed. Last week an EU spokesman made himself a hit on YouTube after scolding a journalist for having the temerity to call EU officials "civil servants." Pedophilia cover ups, blackmail, a total disregard for both democratic institutions and international law, zero accountability and an approach to handling media that would have made Stalin blush, are all found in the Belgian capital.

And while we're at it, the EU has its own track record of demonizing journalists who don't sign up to the spoon-feeding deal, not to mention closing down media outlets that expose its corruption.

But let's get back to the immigration deal with the EU. Legalities aside, the practicalities look like a legal minefield. How is the EU going to return, by force, thousands of refugees? And didn't we see in Calais that many would prefer to live out hardship and cold for a chance to get into the U.K., under what they would assume to be an asylum status? Is the EU going to create a real external frontier? Is it going to also police the entire Mediterranean?

WHAT A WONDERFUL WORLD FOR EU

And while we indulge ourselves with this illusion of the EU being a superstate with armies and air forces at its disposal - stop laughing - let's crank up the wet dream scenario to a whole new level. Turkey will be allowed visa-free status for its citizens to travel in the Schengen zone? Such a proposal, firstly, cannot be implemented by the European Commission but by member states themselves at the council level. I have to say I find it hard to believe that France and Germany, not to mention Sweden and Denmark, will agree to hundreds of thousands of Turks coming into Europe in exchange for Syrian refugees. As we have seen, even with Romanian and Bulgaria signing up as full members, visa-free travel brings with it criminal groups who often operate gangs of robbers on the streets of London and Paris. There is also a high number of unqualified workers who will flow in seeking jobs. Can EU countries deal with that? Would they sign up to such a deal, with no guarantees from the EU that even the refugees will be held back? I doubt it.

What I believe we are witnessing is a masterly stroke of diplomatic dynamism - the same dynamism that our own foreign ministers in France and the U.K. could not deploy at the right time with Assad - combined with rank desperation by EU leaders to throw cash at a problem and hope it goes away. Such a foolhardy policy though is only short lived even if it delivers token results. Probably what Brussels is hoping is to buy a few months of breathing space before Europe's real journalists - in their own capitals - turn on them and start to tear the flesh from the bone. EU leaders are no doubt telling themselves that once the U.K. referendum issue is buried - a 'stay' vote is reached - then they will be able to relax once more and work out a way to blame the Turks for short changing them on the Syrian refugee deal. But there's more irony. It was Britain who always argued for Turkey's EU membership, yet it might be Turkey which plays a hand in the downfall of the EU itself as the latest Syrian refugee plan might deal the eurosceptics in Britain their best hand yet.