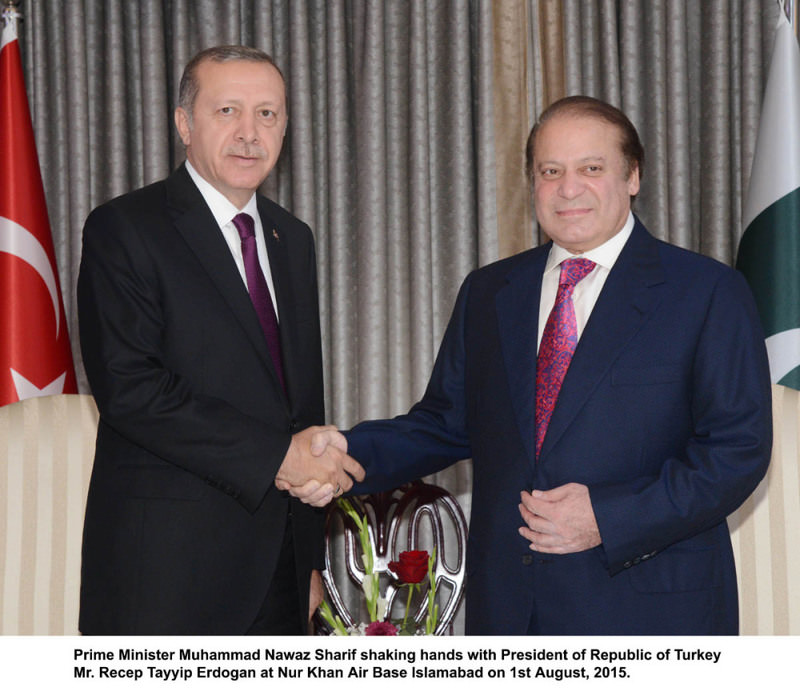 The brotherhood between Pakistan and Turkey, two nations that share similar histories, is a good example to follow for other countries in the world's chaotic atmosphere

Today on Pakistan Day 2016, the people of Pakistan and the Pakistani diaspora in all corners of the world are remembering the epic struggle of their forefathers for the establishment of Pakistan as a free and independent country. On March 23, 1940, the Muslims of South Asia took a decisive step toward self-determination and the fullest realization of their national aspirations. The All-India Muslim League at its annual session in Lahore adopted the historic Lahore, or Pakistan, Resolution demanding the creation of a separate homeland for Muslims of the sub-continent.

The separate homeland envisaged in the Lahore Resolution of 1940 was earlier envisioned by our national poet-philosopher Mohammad Iqbal, who presented the idea of Pakistan in his famous presidential address at the Allahabad session in 1930. The passage of the resolution imparted strong momentum to the Pakistan movement and, under the dynamic leadership of Quaid-e-Azam Mohammad Ali Jinnah, this vision was translated into reality within the span of seven years. Pakistan emerged on the world map as a sovereign state on Aug. 14, 1947.

Pakistan Day is as much a time for rejoicing as it is for renewing the nation's solemn pledges. On this day, Pakistanis everywhere recall the sacrifices made by their valiant fore-bearers so that succeeding generations could live in freedom and dignity. They pay rich tributes to the sagacity and foresight of the founding fathers like Iqbal and Jinnah and reaffirm their resolve to stand by and fully realize the ideals for which Pakistan was established. The creation of Pakistan was the result of a democratic struggle, aspiring to create a space for Muslims where they could develop to their fullest potential in spiritual, cultural, economic, social and political terms - a place where they could lead their lives in accordance with the principles of justice and fair-play, democracy, constitutionalism, economic well-being and social welfare.

Pakistan's journey as a new nation-state commenced with formidable challenges, especially during its formative years. From the mass migration of millions to difficulties over the division of assets and from differences over the distribution of water resources to conflict and war over Kashmir, the resolve of the nascent state was tested at every step. Both our people and the leadership, however, proved equal to the task. In the darkest of hours they neither gave up hope nor the will to succeed. Their resilience made sure that all these problems were surmounted and Pakistan was put firmly on the path of peace, progress and prosperity.

Indeed, today's Pakistan represents a profound transformation from the modest beginnings of its earliest days, which was marked by the lack of an industrial base, insufficient civil and military structures and virtually no steady financial resources. Present-day Pakistan with its emerging economy, burgeoning agricultural and manufacturing base and growing national income tells a different story. It illustrates the progress made possible by sheer determination and an unshakable belief in the value of human endeavor. An empowered parliament, a well-established pluralist tradition, deepening democratic culture, dynamic civil society, independent judiciary and vibrant media are the hallmarks of today's reality for which the people of Pakistan feel justly proud.

Pakistan's strengths in regional and demographic terms are also numerous. Strategically located at the crossroads of South Asia, Central Asia and West Asia, Pakistan is a natural hub and land bridge for the flow of commerce and energy across regions. As the sixth-most populous country in the world, endowed with rich natural and human resources, Pakistan's present growth and future potential are self-evident. It has already attained self-sufficiency in food and become one of the leading countries globally in the production of cotton, rice, wheat, sugarcane and milk.

The country has industrial bases for centers textiles, automotive, cement, sporting goods, leather items and food processing. With rich cultural heritage, tremendous geographical and climatic variation and industrious and enterprising people, there are innumerable reasons for beneficial economic engagement with the world.

With steady growth and an expanding consumer base, Pakistan offers vast opportunities for foreign investors in diverse sectors, including energy, telecommunications, infrastructure, agro-based industry, urban development and housing. With an abundant skilled and economical labor force, well-developed transportation and communication networks and attractive government incentive packages, Pakistan is well-suited for profitable foreign investments. The stock markets continue to boom and the currency remains stable. For more than a decade the Karachi Stock Exchange (KSE) has been one of the best-performing markets in the region.Economic development has been the highest priority for the government of Prime Minister Muhammad Nawaz Sharif, with a particular focus on strengthening energy security. Backed by national consensus, resolute steps have been taken to combat extremism and improve the security environment. Operation Zarb-e-Azb has yielded substantial results. Efforts are also underway to bring the fruits of democracy to the people at the grassroots level by ensuring good governance, advancing social welfare and promoting tolerance and societal harmony. In the external realm, the greatest emphasis remains on creating a peaceful neighborhood so that the core national objective of economic development can be robustly pursued.

While impressive strides have been made in key areas of focus in Pakistan's foreign policy over the past one year, the strategic relationship with Turkey has also witnessed significant expansion. In this context, before anything else I would like to reiterate our profound sympathies and condolences to all those who have lost their loved ones in the string of terrorist attacks in different part of Turkey recently. These have been unequivocally condemned by the people and leadership of Pakistan. Like always, Pakistan remains in strong solidarity with Turkey, certain in the belief that the brotherly people of Turkey would defeat this scourge with their unshakable resolve.

Pakistan's multi-faceted relationship with Turkey rests on the solid foundations of common faith, cultural affinity and shared history and traditions. A vast reservoir of mutual goodwill at the people's level serves as our biggest asset. In fact, the historic bonds linking the two nations predate even the emergence of modern-day Pakistan and Turkey. This has essentially been a journey of friendship and brotherhood spanning decades and nurtured by successive generations. It is illustrated by the abiding tradition of both peoples standing by each other in good times and bad and supporting each other's national causes whether Kashmir or Cyprus. In a nutshell, our bilateral relations continue to be marked by exceptional warmth, cordiality, mutual trust and understanding, which are unique in inter-state relations. Our perspectives converge on all major issues of regional and global significance.

During the past year, significant progress has been made in transforming this cordial relationship into a strong economic partnership, as desired by the leadership in both countries. In February 2015, the prime ministers of our countries agreed to commence negotiations on a comprehensive bilateral free trade agreement covering trade in goods, services and investments. It is gratifying that the framework agreement for this was just been signed in Islamabad on March 22, 2016. Both sides are resolved to complete the remaining parts of the process on a fast-track basis so that the true potential for trade and economic cooperation can be realized optimally.

The participation of Turkish companies in energy and infrastructure projects is steadily growing as well. The metrobus, solid waste management and wind mill projects are shining examples of our growing bilateral collaboration. There are other possibilities in transportation, aviation, low-cost housing and a wide range of power generation projects from hydroelectric to coal to renewables. The Anadolu Group has recently taken the decision to significantly upscale its investment in the beverages sector in Pakistan and has been urged to explore other opportunities including retail business.

These efforts would be reinforced by the strides being made in enhanced connectivity. The frequency of Turkish Airlines flights has increased to 28 per week. The spadework for the earliest resumption of the ECO Container Train is underway. Pakistan's recent accession to the TIR Convention opens up new opportunities for increased trade and commercial interaction. Meanwhile, the private sectors from both our countries have intensified mutual interfacing and are reinforcing efforts for collaboration in diverse sectors. Arrangements like currency swap and Eximbank credit line are sure to provide the necessary boost to their endeavors.

Bilateral collaboration continues to grow in other vital fields as well from politics to security and defense and from culture and education to people-to-people exchanges. Defense ties are reinforced by regular high-level visits and collaboration in military training and education. Parliament-to-parliament cooperation is intensifying. In the cultural domain, we are currently celebrating the 100 years of instruction of Urdu language and literature in Turkey. As the collaborative links between Pakistani and Turkish universities grow, the number of Pakistani students at Turkish universities has passed well over 1,000. Academic, think tank and media exchanges are attaining new levels. All these aspects serve not only to expand the scope of existing cooperation but also substantially advance what our leaders have characterized as the indispensable partnership, serving the cause of our nations and of peace and stability in the region and beyond.

As we celebrate this Pakistan Day, I reiterate my profound gratitude to the brotherly people and government of Turkey for their steadfast support and solidarity. I also extend my warm felicitations to all fellow Pakistanis living in Turkey on this auspicious occasion. I conclude by praying for long-lasting friendship and brotherhood between our two populations.