Beyond the terror of tyrants and thugs 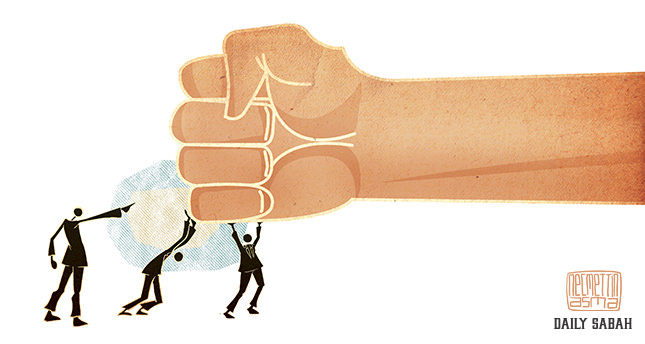 The Middle East is being devastated by the hands of tyrants and thugs, but Islamism as a form of liberation theology based on its trans-national vision could empower the future

As the attacks on Brussels follow hard on the heels of attacks in Ankara and attacks Ivory Coast, there is a clamor to see all these actions as being part of one unified global insurgency fueled by Islamist ideology. This neo-conservative narrative being peddled these days is similar to the one that brought the world the never-ending war on terror. It is hard to conclude that the world is a safer place after 15 years of this global dirty war. Libya, Iraq and Yemen have virtually collapsed, Nigeria and Pakistan have been devastated and Syria is imploding, spilling violence across its borders with increasing frequency and ferocity. In the face of these events we see national leaderships unable to mount and sustain an effective counter-strategy.

The use of drone strikes on an industrial scale and deployment of special forces and airpower have not proved significantly more effective than invasions and occupations. Less-wise kinetic methods such as counter-extremism polices have been good for filling the pockets of charlatans and dubious think tanks and rolling back civil rights, but not much else. According to Ben Emerson, the U.N. special rapporteur on human rights, the proliferation of counter-extremism initiatives across the world is undermining the fundamental freedoms in societies where human rights have been central to their self-image. One way to see this is in the way Western liberal democracies are coming into line with the rest of the world, whereby human rights are proclaimed in speeches but denied in practice.

For governments presiding over largely Muslim populations, the logic of the war on terror presents a unique set of challenges, as the war on terror is ultimately an exercise in Islamophobia. This is because Islamophobia is not a nebulous fear or hatred of Islam or Muslims, but rather the rejection and denial of Muslim political agency. One of the key features of the established methodology of the war on terror is a tendency to treat all opposition as potential terrorists. Governments that rule over large and increasingly politically aware Muslim populations risk institutionalizing Islamophobia by the way in which they denounce their opponents as terrorists or terrorist sympathizers. The proliferation of the category of terrorist curtails the expression of Muslim agency. It undermines the ability of governments to seek alternatives to the war on terror.

When Muslim governments fall in line with the logic of the war on terror they reinforce Islamophobia and undermine their own legitimacy. Without legitimacy no form of rule, be it republican or monarchical, can sustain itself. Governments based on the mobilization of the expression of Muslim political agency confront the particular challenge of how to fight an armed insurgency without falling prey to the logic of the war on terror.

The temptation to allow one's natural anger at atrocities committed by insurgent movements is strong and can cloud one's judgment. It can lead to the idea that you can bomb and bluster your way out of terrorism and insurgencies. It is this temptation that explains why counter-insurgency efforts have a poor record of success. To defeat armed insurgents they have to be isolated using cultural and political reforms and not simply confronting them with superior firepower and shrill demonstrations of an iron will, which have the opposite effect.

Faced with the challenge of an armed insurgency a government has to have the courage to refuse the simplicity of the war on terror and pursue a strategy of persuasion. This is not simply another iteration of hearts versus minds as a tactical response, but a strategic response. This strategic persuasion requires the articulation of a credible, attractive vision of an alternative future that even many of those who currently swell the ranks of DAESH and Boko Haram and other similar groups and gangs can buy into.

Such a vision is not currently forthcoming. The clans grouped around Riyadh have no ambition other than propping up untold and unaccountable privileges. They can buy and bully support for their mission to hold back the clock of history, but they cannot offer a persuasive vision of a more just future. The Western governments that are architects of this global dirty war seem to be on autopilot, not knowing how to win or end this war that their hubris started. They continue to lecture the world on the necessity of democracy and peace while pursuing policies that subvert civil rights and militarize social relations.

One vision of a better future came to an abrupt halt with the bloody overthrow of the Muslim Brotherhood government in Egypt, which ended the possibility of an Ankara-Tehran-Cairo concert of similar sized countries with complex societies and economies and active Muslim publics replacing the regional order bequeathed by the Sykes-Picot Agreement. Such a regional ensemble of Turkey, Iran and Egypt would not have, in itself, resolved all the problems of the region, but it would have offered an alternative to the present state of affairs. It would have meant three countries in which Islamism was associated with the struggle for social justice while the banalities of governance would have undermined the primacy of violence and apocalyptic bravado of the Kharijites of DAESH and their associates and the Baathists.

The global dirty war has hastened the demise of the regional order and the unrest and violence in the region is not so much fueled by ideology as caused by structural changes. The reason why governments have failed to adequately address the challenges of this historic transformation is as much a failure of imagination as it is of nerve. Islamism as a form of liberation theology has to take up the intellectual and cultural task of articulating a trans-national, non-sectarian, empowering vision of the future. It has to reaffirm that Muslims and non-Muslims deserve better than being ruled by tyrants or thugs.