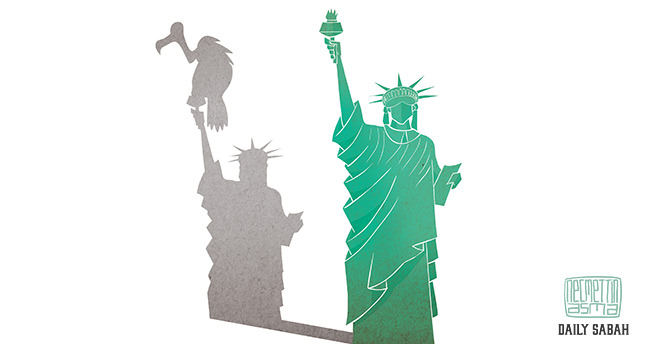 The U.S.'s self-interest policy-making with other states causes much trouble to it. If it does not change this ongoing mistake, it is likely to be a lonesome cowboy in international diplomacy

It is a cliche now to start any conversation on Turkish-U.S. relations saying that the two countries are allies and they have developed a strong strategic partnership over decades. Immediately after these opening sentences, however, the conversation continues with remarks such as there have been ups and downs in this relationship. The ebb and flow of this relationship coincides with the respective interests in and different attitudes on certain developments in the region. For instance, just after becoming formal allies upon Turkey's membership in NATO in 1952 the United States severely warned Turkey not to use its military in Cyprus in 1964 as Turkish-Greek relations were deteriorating on conflicting claims. It was inevitable for the U.S. to impose sanctions on Turkey when it was militarily engaged in Cyprus in 1974. However, it was the military coup of 1980 that aided to ameliorate the relationship, as the Turkish military wanted to ease the strained relations. Perhaps, according to some rumors that a U.S. intervention in this coup was useful, the CIA Ankara chief, Paul Henze, cabled then U.S. President Jimmy Carter: "our boys did it." Despite consistently denying the incident it still remains in the Turkish public's collective memory. The ensuing events lend weight to the rumors as the people in uniform in both countries became fond of each other until another event emerged in the region. That Parliament's refusal to allow U.S. troops to use the U.S. base at İncirlik when they carried out their mission of toppling Iraqi dictator Saddam Hussein in 2003 was a clear indication that the relationship and cooperation would only continue as long as it served their interests, and whenever Turkey went against U.S. requests it would be another down period.

TURKEY WAS RIGHT ABOUT IRAN

The desire of Turkey to be on an equal level with the U.S. should not have shocked the U.S. administration as it was a sovereign state with a magnificent past. All in all, Iraq is a neighboring country and Turkey and Iraq would be left alone after the U.S. left the region. At that time, Turkish officials thought that Iraq was very far away from the U.S., as the word "Iraq" meant in Turkish, but it was very close to us, and Turkey wanted to safeguard its own interests. Another voting incident that had a detrimental effect in U.S.-Turkish relations took place at the United Nations Security Council when the U.S.-backed proposal to impose sanctions on Iran to discourage Tehran's nuclear ambitions was rejected by Turkey in 2010. Yet time showed that Turkey was right as the U.S. itself lifted all sanctions on Iran last year.

The latest blow in the relationship came when Turkey decided to purchase Chinese air defense systems in 2013 against NATO conventions. In this case, Turkey was absolutely right, because if it bought the system either from the U.S. or from any other NATO member they would not cooperate with Turkey in terms of know-how concerning the system. If they were unwilling to share knowledge, it was only natural that Turkey would seek other alternatives who would offer knowledge and technology transfer.

There might be other incidents that had strained the relationship, like the worsening Turkish-Israeli relations after the Mavi Marmara flotilla crisis. Yet, under the current circumstances, the difference of opinion between the two countries seems to be widening on the Syrian civil war. Ankara blames a lack of support from the U.S. for the moderate rebels, which in turn causes the more radical terrorist groups like DAESH to rise. As he said in an interview, U.S. President Barack Obama has his own strengths and weaknesses, and perhaps he did not want to jump into the fire, he avoided a strong commitment. At the beginning he agreed with Turkey that Bashar Assad should go if peace and prosperity were to come to the region, but apparently the threat of DAESH changed his mind. Contrary to Ankara's insistence of Assad's removal from power, he prioritized dealing with DAESH. Furthermore, using the Kurdish People's ProtecΩits (YPG) as a subcontractor in Syria and Iraq without sending any American troops seemed to be a more viable option. Nevertheless, in this way, Syria's future was left to the hands of other actors like Russia, Iran or China rather than its own people. Moreover, the closeness of U.S. with the YPG, which is affiliated with the terrorist PKK, injured the relationship further. The U.S. should understand that when a terrorist organization does something that serves their interests it does not make them "good guys" no matter what alias they operate under. In other words, terrorist organizations cannot be classified as good or bad; they are always terrorists and cannot be trusted. As to the allegations of Turkey supporting DAESH or any other extremist groups are just unfair because Turkey also suffers from their brutal attacks. Besides, Turkey has prevented thousands of potential DAESH fighters from entering Syria and extradited all of them to their countries of origin, including the suicide bombers that carried out the bloody explosions in Brussels last week. Ankara also simply does not see why the U.S. opposes its proposal of a safe zone in Syria. Turkey basically wishes to protect its own borders from the illegal entries by terrorists from Syria, and in this way it wants to show the whole world that it does not or has never allowed any transportation of arms, ammunition, new recruits for terrorist organization or even the illegal oil trade with DAESH between Turkey and Syria.

THE ENDS JUSTIFY THE MEANS

It seems that whenever there is a risk against the U.S.'s benefits and interests for smooth cooperation with Turkey like during the Cold War or the potential of spreading Islamic radicalism from Iran it seems that the U.S. dumps its partners whenever it sees fit. The U.S. administration ignored Ankara's demands to please Iran at one time and now turns a blind eye to Ankara's proposal for a safe-zone in Syria. The U.S. is a difficult partner for Turkey because it is too demanding, expecting that Turkey should guess what the U.S. wants in a certain situation and be ready to act in accordance with U.S. interests. But this kind of bilateral relationship simply does not exist in international relations. The U.S. needs to be more responsive to Turkey's interests in the region and should support Ankara against external threats and domestic struggles. Like in the case of the U.S.'s dealings with its own neighbors, for example, Mexico or Venezuela, Turkey would not interfere as it is too far away from us and they should know what is good for them. Similarly, the U.S. needs to be more sympathetic to Turkey's struggles against the internal separatist insurgence and Turkey's political strategies concerning Syria as a country with its longest land border.

When one looks at the up periods of the relationship, it is crystal clear that the increasing trade volume helps to establish closer links between the two countries. So, instead of forcing Turkey to overlook its own interests the U.S. should increase commercial ties, especially in this period of Russian economic sanctions. Turkey, with its 75 million people, a high percentage of whom are young, should be considered a great opportunity for business investments not only for the U.S., but also for other industrialized countries.