The making of genocide memory 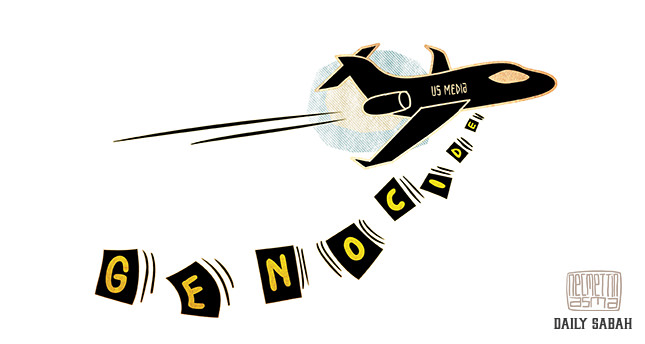 As the common use of the word 'genocide' became a feature in the cultural environment of New York, it was natural for some Armenian-Americans to characterize the Armenian suffering in World War I as genocide

Genocide obsession might seem like an inherent part of Armenian national memory. Currently, most Armenians are convinced that it is disrespectful or even dishonest to remember what happened to their ancestors in the final period of the Ottoman Empire without placing genocide at the center of one's thoughts and expressions. In genocide discourse, sentences are being crafted as if genocide is the memory itself.

The commemoration has become an occasion for "genocidizing" history. Thus, the memory is not simply that the Ottoman police arrested over 200 members of the Armenian leadership who were suspected of disloyalty at a fatal time for the government on April 24, 1915, but rather that Armenians insist that it be seen as marking the beginning of genocide.

The past is washed with the rhetoric of genocide. One's morality is questioned if the word "genocide" is not used to describe what happened to Ottoman Armenians during World War I.

However, undeniable evidence shows that there was a time not too long ago when even leading scholars of modern Armenian studies did not characterize the event as genocide in their work on this particular point in history.

When, how and why did Armenian memory become filled with genocide?

Before the Armenian narrative became the crown jewel of genocide discourse, the term "genocide" served a political purpose against the Nazis. It was first defined during World War II in an effort to justify control over post-war Germany through international law by highlighting Germany's activities as an occupier. The term genocide was introduced in the 1944 book "Axis Rule in Occupied Europe" by Raphael Lemkin in direct and exclusive reference to the actions of the Axis powers in recently conquered territories. The book does not mention Armenians.

Following the Yalta Conference, as the post-war occupation of Germany became more of a reality, it was an American interest to argue that the term genocide was not just made up to criminalize Germany. Then, The New York Times (NY Times)and other agents of American soft power such as Lemkin, who had been employed by the U.S. government, began to list the Armenian case among other cases of massacres. When Lemkin in 1945 and The NY Times in 1946 each made their first published references to Armenians in this context, both texts referred to Armenians in one sentence along with Greeks and, suspiciously, in both texts the phrase "diplomatic action" was used, suggesting a master source.

During this time the communist threat became the new main focus of American power, and the pogroms in Russia's past began to appear on American lists of atrocities that transformed the term genocide from its specific anti-German origin to greater and more popular use. Correspondingly, the Soviet Union became the primary target of genocide accusations. Throughout the late 1940s and early 1950s exiled representatives of national groups such as the Czechoslovakians, Estonians, Hungarians, Latvians, Lithuanians, Poles, Rumanians, and Ukrainians, all claimed – from New York in the pages of The NY Times – that their land was occupied by the Soviet Union and that their people subjected to genocide. Similarly, the American press publicized accusations that the Soviet Union was orchestrating genocide in Korea during the war there.

As the common use of the word genocide became a feature in the cultural environment of New York, it was natural for some Armenian-Americans to characterize the Armenian suffering in World War I as genocide. For instance, in 1955, Sarkis Atamian used genocide for a section title in his book, although without making any arguments about genocide or using the term in the body of the text, meaning that Armenian-Americans used the word genocide casually, as other people did, and there was no belief that those who do not use the word ought to be accused of denial.

Meanwhile, the study of Armenian history at American universities began to take shape. Two monographs in the 1960s – one by Louise Nalbandian and another by Richard G. Hovannisian – were published by the University of California Press. They were largely the product of an initiative that had been led by Harvard University Professor Richard N. Frye, whose various roles in the service of the U.S. government included intelligence work.

Significantly, neither of these works on Armenian history by the two Armenian-American scholars mentions the word genocide.

In "The Armenian Revolutionary Movement" from 1963, Nalbandian prepares the ground for an anti-Turkish memory, but without using the word genocide, as she claims that "in 1915, the Turks brutally massacred Armenian men, women, and children on an unparalleled scale and drove the remaining survivors from Turkish Armenia" (p. 185).

In "Armenia" from 1967, Hovannisian attempts to thicken the Armenian case against the Turks, but without any reference to the word genocide. This is mighty conspicuous in consideration of his current genocide-per-word average. Moreover, in the book he uses words other than genocide to describe what happened, in sentences that these days are typically dominated by characterizing the events as genocide. Hovannisian now derides those who use words such as deportations, massacres, cataclysm or tragedy instead of genocide to describe what happened, but such are the words that he chose to use in 1967. For example, in a note (51) he states: "April 24, 1915, is accepted as the inaugural date of the Armenian deportations…" (p. 274).

As late as 1978, the magazine Ararat published an article by Hovannisian titled "Rewriting History" in which he addresses the Armenian-Turkish polemic over World War I head-on, yet without mentioning the term genocide at all.

How can there be an Armenian demand that the event be characterized as genocide if scholars of Armenian history such as Nalbandian and Hovannisian elected not to use the term in their own writings?

This moral question has a soft-power answer. For the sake of credibility and the effective arrival at a worldwide acceptance of how the term genocide is now used to describe the Armenian suffering in World War I, it had to appear as if Armenians themselves insisted on using the term genocide before American-influenced historians and genocide scholars could present it as genocide in works on history. The use of genocide would not have been persuasive had it originated in publications by American university presses rather than from within the Armenian community.

AND THE OSCAR GOES TO...

The agitation of Armenian-American to absorb the word genocide as part of their own collective memory started during the escalation of American military involvement in Vietnam when The NY Times gave Vahakn N. Dadrian a platform to debut the contentious narrative, and at the heart of it the conviction that Armenians were "victims of the first modern example of genocide." The stated reason for the publication on May 30, 1964, of approximately 500 words – double the length of each of the six other letters that day – was a three-week-old article about the Nazi slaughter at Auschwitz. In effect, like a bulletin board for group mobilization, The NY Times, via Dadrian, informed the public almost a full year in advance that the upcoming commemoration of the 50th year of the "1915 events" was going to be a momentous event.

When The NY Times published another anti-Turkish tirade by Dadrian on August 10, 1964, it went as far as using the fiery word genocide to ignite passion for the idea of an Armenian land-grab once the Armenians were independent of the Soviet government, asking: "… can the Armenians be denied the right to reclaim their ancestral territories which Turkey absorbed after massacring their inhabitants?" It was The NY Times that facilitated the incorporation of stirring words such as "justice" and "retribution" into the Armenian collective vocabulary along with the genocide.

Readers were then informed about Armenians using the word genocide in commemorations. The commemorations introduced prominent banners, saying that Turkey is "Guilty of Genocide" and that it holds "Armenian Land." This was highlighted by The NY Times, which offered three days of coverage of Armenian commemorations in 1965 from April 24 to April 26. Interestingly, neither the date April 24, 1915, nor the word genocide were mentioned by the newspaper in this Armenian context in the previous years. The NY Times had not reported any such Armenian claims against Turks since the advent of the term genocide until then. There was no mention of a 40th or 30th year commemoration, let alone in the years that did not mark a round number, yet years 51 and 52 were advertised in the newspaper.

Within several years, the infusion of the term genocide into the Armenian language was sufficient for it to look like the genocide memory came from Armenians themselves in a bottom-up fashion. This entailed careful articulations in trusted sources of information as well as inspiring street activities. At this time the public was instructed that the Armenian suffering had been forgotten from memory, but this illusion was achieved by a false conflation of no genocide with no memory.

In 1979, the report by the U.S. President's Commission on the Holocaust indicated that the government intended to establish a genocide discourse under the wings of Holocaust studies, and signaled that Armenian victimhood would be taught as a primary example of genocide. Since then, hateful language against Turks has been sanctioned by educational literature on history.

As a result of this externally transmitted language, and emboldened by the self-righteousness that genocide indoctrination injected in their national spirit, Armenians began to self-perpetuate a consciousness of justified aggression against the entire Turkic family of people. The vengeful disposition was manifested in Armenian organizations' terrorist attacks against Turkish diplomats in the 1970s and 1980s, and it has continued to manifest itself in the bloody Armenian capture and occupation of the Nagorno-Karabakh region.

Positioned by The NY Times, Dadrian did not merely prophesy, but preach, an Armenian ambition that was bound to clash with Turkic possessions and interests. He did this by inserting genocide into Armenian memory.

Certainly, many Armenians suffered greatly in World War I, and quite possibly the historical significance of what happened to Ottoman Armenians – not just in 1915 – would not have received much attention without the genocide debate, but the "genocidizing" of this history leads away from nuanced knowledge and neighborly demeanor. "Genocidizing" makes it impossible for Armenians and Turks to agree on what is being remembered and what is to be expected of their relations.

While Turks have been vilified by the intentional wording that associates them all with a crime of which no Ottoman leader has ever been charged in a competent court of law, Armenians have been sentenced to a constantly contested national memory whose continued mental reassembly relies on the systematic misuse of the term genocide.