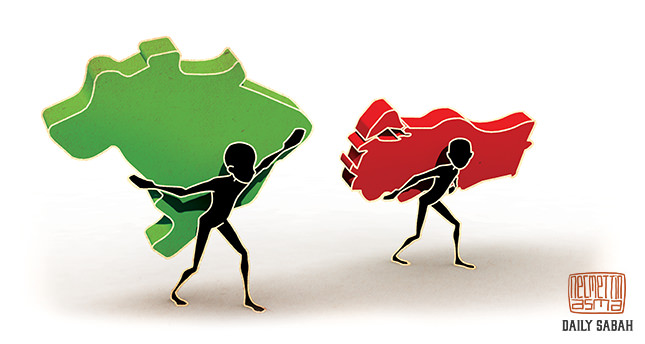 Brazilian leaders, both President Dilma Rousseff and former President Lula da Silva, can learn a lot from President Erdoğan's successful mobilization of the grassroots against those who tried to illegally topple the government through a 'soft coup'

Studies and analyses comparing the dynamics of the emergence, leadership style and "soft coup" process in Turkey and Brazil will probably flood media outlets and academic journals in the very near future.

Recently, Turkey and Brazil occupied a significant place in many discussions about emerging powers and their roles in global politics, especially following their involvement in the Iranian nuclear issue as mediators in 2010. The Turkish and Brazilian experiences share much in common. In domestic politics, as the Justice and Development Party (AK Party) and its leader Recep Tayyip Erdoğan took over the government in Turkey in 2002, Workers' Party candidate Lula da Silva ascended to the presidency in Brazil in 2003. Both figures had overcome attempts to keep them out of the political scene, and their rises to power signified a new dawn in the two countries' internal affairs. All of a sudden, their leadership styles and uninterrupted economic booms consolidated their internal approval, which enabled them to play active roles in both their regions and global politics. The leadership and values asserted by both countries came into existence with Erdoğan and da Silva. In addition, gradual social transformations in both countries sharply shifted the center-periphery balance, making previously excluded people more included in politics. Finally, the setbacks that the two countries encountered in their domestic spheres also showed similarities. In both cases, the leaderships were confronted with a "soft coup" that included illegal wiretapping, smear campaigns in social media, manipulations of fake or secret accounts and the discrediting of political leaders.

Hence, the evolution of processes in Turkey and Brazil since 2003 creates a pattern in tandem with their economic and social transformations, regional and global assertiveness and internal vulnerabilities.

The sharp domestic shift coincided in 2003 for both countries. For the first time in its history, the Workers' Party gained a majority in both the Chamber of Deputies and the Senate, and da Silva ascended to the presidency. In Turkey, the Islamist rooted AK Party won a substantial majority of seats in Parliament under Erdoğan's leadership. These two political groups had been confronted with serious systematic preclusions in their countries. Once in power, they then successfully accomplished economic developments, attained political stability and generated social transformations. While the chipping away at the entrenched center-periphery balance stands as Erdoğan and da Silva's biggest successes, these socio-economic transformations caused discomfort for those who had previously enjoyed social and political privilege.

Erdoğan and da Silva's successes had repercussions in both their regions and on the global scene. Firstly, both actors presented unique characteristics that embodied their countries' values. In Brazil, the left-wing Workers' Party held power in its hands by diverging from the political line of other indigenous left-wing actors, like those in Cuba, Venezuela and even Argentina. Brazil was also actively trying to deepen its regional and global involvement by prioritizing economic engagement. In Turkey, the Islamist AK Party ruling a secular state made the party a unique actor in the country. The AK Party was also the party that accelerated Turkey's membership negotiations with the EU and cemented the country's relations with neighboring countries. These two newly emerging powers in a gradually multilateral world constructed a mutual relationship based on middle power diplomacy and played an active role in the globally important Iranian nuclear Issue. Turkey and Brazil even reached an agreement with Iran on its nuclear activities with rules that overlapped the conditions put forward by U.S. President Barack Obama in a secret letter to da Silva. Nevertheless, they were both considered "black swans," increasing their influences in line with their own agenda in international politics.

For all these reasons, Erdoğan and da Silva were regarded as eminent leaders in their respective domestic politics just like Turkey and Brazil enhanced their leadership roles in the region.

Dilma Rousseff succeeded da Silva as president in 2011 when he had an approval rating above 85 percent, leaving Rousseff with the responsibility to carry his legacy. Since 2013, both Turkey and Brazil have experienced different types of setbacks. In 2013, street protests in almost every city aimed at toppling the governments erupted less than 10 months before elections in Turkey and slightly over a year before elections in Brazil. This period was an opportunity to recognize social media's important influence in mobilizing people as well as in creating and manipulating massive resistance groups. However, these demonstrations and occupations of public places did not reach their target, and elections held in both countries in 2014 gave a green light to both leaders to move forward.

The second non-political attempt to target the leadership was a "soft coup" with all its instruments of illegal wiretapping and activating massive groups in social media manipulation through fake accounts. In Turkey, illegal wiretappings were leaked with the help of police and prosecutors three months before the upcoming local elections in March 2014, and social media was flooded with manipulations by secret and fake accounts. Turkish newspapers unquestioningly referred to information coming from social media, and even politicians put their hopes in these accounts to take down the government instead of campaigning on their political agendas and plans for the country. Yet Erdoğan's resistance not to allow politics to be shaped by illegal activities prevailed following his utmost effort to convince Turkish people to stand against this "soft coup." Erdoğan's AK Party first won municipal elections in a crushing victory, and then he became the first president elected by popular vote in Turkey with 52 percent of the vote in the first round of the elections in August 2014.

In the same year, Rousseff was elected to her second term as president with slightly over 50 percent of the vote in the second round. However, an impeachment campaign was launched by Rousseff's archenemy, Eduardo Cunha, the president of the Chamber of Deputies of Brazil, last December with allegations that she broke fiscal laws. What followed made the story even more interesting. In February 2016, da Silva hinted that he would run for president again "if necessary." He was briefly detained a few days later and questioned due to charges of alleged money laundering and accepting bribes -- claims that he later refuted. Massive street protests started erupting again in Brazil with 3.5 million people from around the country protesting against corruption and demanding Rousseff's impeachment as well as the detention of da Silva. To prevent a judicial coup stemming from the judiciary meddling in politics, Rousseff appointed her mentor and the leader of the movement as her chief of staff in the cabinet, providing da Silva with immunity. After his appointment, the prosecutor leaked a phone conversation between Rousseff and da Silva recorded by the police about da Silva's appointment. Even more interestingly, the former president's appointment was halted by a judge who was actively participating in the street protests against Rousseff and da Silva. Finally, the Chamber of Deputies voted in favor of Rousseff's impeachment on April 17, 2016, allowing the Senate to decide on Rousseff's future in politics.

As streets were boiling with protests due to corruption allegations, 150 deputies who were also implicated in the corruption scandal voted in favor of Rousseff's impeachment. One deputy hailed a general who conducted a military coup in 1964 when Rousseff was tortured in prison, and another voted "yes, for the love of God," despite being on Interpol's list for money laundering. It is also very cynical that Rousseff herself is not actually accused of being involved in corruption.

Over the last decades, emerging powers have been important topics in all fields. The drastic shift in their domestic scenes and evolving center-periphery balances and economic developments, leaderships and the "soft coup" method all give us a pattern for new studies. This pattern should also include relationships between media and politics as well as the influence of judiciaries.

Repelling a "soft coup" is strongly based on the extent to which the leadership can mobilize its own grassroots base. In Turkey, Erdoğan successfully mobilized his supporters and won two consecutive, crucial elections in 2014 despite attempts to heavily damage his image. In Brazil, da Silva and Rousseff will probably mobilize their base and bring politics back to the ground. Last but not least, while the AK Party was lucky to have a resistant leader who kept a firm stance against the "soft coup" attempt in Turkey, the Workers' Party is now lucky to have some competent foreign journalists elaborately following and analyzing the unfolding developments in Brazil without the prejudice and agenda that most have while reporting on Turkey.