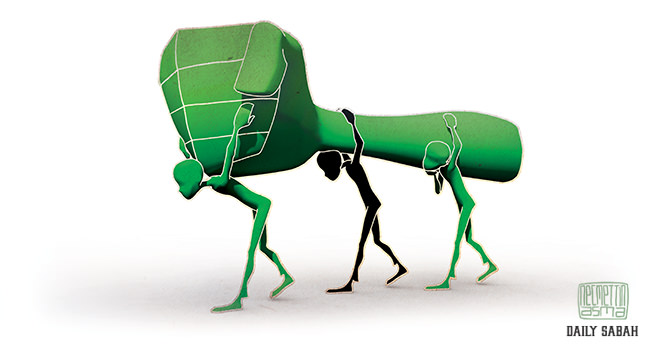 The history of humanity is the history of violence in the forms of wars, conquests, colonization and the creation of empires in the name of God. The question is whether violence is something abnormal or an intrinsic characteristic of human activity. In other words, how could revolutions, massacres, torture or cruelty be explained or even justified, as humans have been the most destructive species on this earth? The 20th century was the bloodiest period in human history with ever more advanced technology of war machines, which has swept away all the hopes of the Renaissance to produce a more enlightened, cultured and non-violent phase of humanity. Furthermore, human existence today has become insecure, problematic and conflict-ridden. Terrible and unbearable pressure, in the form of bombs, terrorist attacks, suicide bombers, ethnic cleansing, cultural genocide and oppression of women and children are the core components of modern social life. Nobody can deny that humanity has lost its innocence in this age of disenchantment.

Religions could play two roles at the same time. One is the integrative role that provides a milieu in which the followers could have a secure, tranquil and peaceful existence in the spirit of solidarity, but the other is that religions could also stipulate the motivation, justification, organization and worldview for violence. Religious extremists could take their clues from the darker side of their religions in specific cultural contexts that have given way to religious violence at particular moments in their history. From this perspective, no religion is innocent with their fundamentalist iterations, being abused by the political ideologies to attain their ultimate goals of achieving worldly power. Although perpetrators of violence do exist in all religions and their forms, people around the world today have been fed images and symbols of terrorism by Muslims accompanied with accusations that Islam accommodates the concept of jihad.

Countless times the Muslim apologizers have declared that jihad is a misunderstood concept from Islam, claiming that it has nothing to do with current terrorism. It is rather a notion that regulates its conduct of affairs relating to matters of war, peace and international relationships within the context of the rule of law. However, the concept has been taken out of its legal context and abused by a bunch of frustrated activists to gain certain benefits such as identity, being recognized by wider society, revolt against injustice and showing their dedication to their religion. In the hands of these kinds of religious extremists Islam's image has been blurred as if its legal provisions are arbitrary and open to interpretations. On the contrary, Islam has firmly established its judicial system with some nuanced visions by legal scholars and experts. According to classical sources, there are many conditions under which a war is waged, and there is likewise a consensus among all specialists of religion that only an Islamic state has the authority to declare war or jihad. Consequently, without a state authority, jihad is nothing less than terrorism, no matter by which group, party or organization initiates its. In order to circumvent this fundamental principle a terrorist group committing public acts of violence has called itself the Islamic State (DAESH) in Iraq and Syria pretending that they have the authority to wage jihad against the "crusaders." Nevertheless, this non-state actor, according to Islamic principles, cannot and should not be in a position to force its followers to take up arms and engage in war simply because of its religious or spiritual influence over the members of the group. The sanctity of life and property is so well-established in Islam that no leader without legal authority is given permission to disrupt the existing system to seize power for themselves. In the case of radical groups like the DAESH leadership, which claims to be realizing a revolution, as long as it serves their purpose everything seems to be right to them. Once they started their dangerous game the leadership is no longer able to stop its followers' cruelty as there is no state authority to control their evil acts of terrorism. Since combative jihad is a legal technicality in Islamic law that allows the political leader to declare war against aggressive non-Muslims or domestic Muslim transgressors, here the interests of people precede the interests of the individual. Therefore, it should not be a haphazard decision of a thoughtless religious leader overwhelmed by ideological rapacity. All things considered, Muslims and non-Muslims alike should not fall into the trap of deception that any non-state actor that commits violence in the name of religion can be considered innocent. On the contrary, no matter how they justify their mischief, they disobey their religion, as God does not require violence to establish his order on earth. Therefore, these people are merely terrorists creating disorder in society. Most importantly, those who sanction their terrorism with misinterpretations of their religions are marginal to their own religious communities and their violence seems to counterbalance their marginality. That is probably why these terrorist groups seek religious legitimization to empower them in their own societies vis-a-vis their moderate and mainstream rivals. Like in many other religious traditions, the majority of Muslims denounce the criminal violence perpetrated by extremist non-state actors by distinguishing it from legitimate jihad initiated by a legitimate authority.

* Professor of anthropology in the Department of Radio, Television and Cinema at Marmara University
Last Update: May 04, 2016 1:26 am
RELATED TOPICS