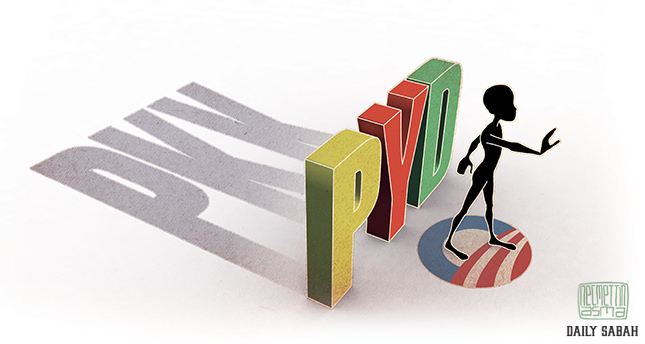 Having left Turkey alone in its war on terrorism both at home with the PKK and abroad with DAESH and the PYD, Obama has shown himself to not be a realist president able to logically pursue U.S. foreign policy

Following his long interview with Jeffrey Goldberg in The Atlantic titled "The Obama Doctrine," the question raised from his coming into office is whether U.S. President Barack Obama is a realist. For some, he is a hesitant realist, or his realism is flawed. In his latest article in Foreign Policy "Obama Was Not a Realist President," Stephen M. Walt also argues that "Obama did not in fact run a 'realist' foreign policy, because he doesn't fully embrace a realist worldview, didn't appoint many (any?) realists to key positions, and never really tried to dismantle the bipartisan consensus behind the grand strategy of liberal hegemony."

Just after the meeting, on April 1 Obama raised criticism over press freedoms in Turkey, saying that he had expressed these sentiments directly to President Recep Tayyip Erdoğan and continued to say "[Erdoğan] came into office with a promise of democracy, and Turkey has historically been a country in which deep Islamic faith has lived side by side with modernity and an increasing openness. And that's the legacy that he should pursue, rather than a strategy that involves repression of information and shutting down democratic debate."

Let's take a look at three essential terms in Obama's above statement on Turkey: Democracy, modernity and openness. Nobody can make an international relations student, who would tend toward realism above all, believe that those terms are from a realist's lexicon. They could belong to a liberal internationalist, interventionist or even an isolationist, but not a realist.

Here is a question for all realist scholars and journalists in the U.S.: Do you think it is a realist approach that an American president can feel so comfortable and committed to argue on media freedom in a country that is one of the most significant strategic allies in such a terrible region and anarchic period of time?

Then, one should recall some vital points to liberal romanticists living in a paradise of freedoms that sorry, history has not ended, the U.S. is no single power or hegemon at now. The international system we live in is characterized by multi-polarity, which is the most dangerous if the balance of power is not settled under the well-defined and established alliance system. A new pole with its own alternative order has already begun to rise in the Pacific under the leadership of China, which is worth notice to take a decision and position accordingly. Then the final question is if the U.S. is in this game with its 60-year alliance with Turkey - the only Western and democratic country in the Middle East, the best in its class, the second largest military force in NATO) and the best you can play, or not.

Kenneth N. Waltz, the founding father of structural realism, argued in his piece "Structural Realism after the Cold War" in 2000 that in the post-Cold War period "the new balance is emerging slowly; in historical perspectives, it will come in the blink of an eye." On China, he put that "China will emerge as a great power even without trying very hard so long as it remains politically united and competent," and continued to argue: "The American aspiration to freeze historical development by working to keep the world unipolar is doomed. In the not very long run, the task will exceed America's economic, military, demographic, and political resources; and the very effort to maintain a hegemonic position is the surest way to undermine it. ... As theory shows and history confirms, that is how balances of power are made. Multi-polarity is developing before our eyes. Moreover, it is emerging in accordance with the balancing imperative."

From this point of view, the 1990s are over and realism is back with a vengeance from Paris and Brussels to Istanbul, Ankara, Diyarbakır and from Syria and Ukraine to Azerbaijan and on to Asia Pacific. For a realist, one of the basic assumptions of realism about the international system, as Professor John Mearsheimer, a prominent international relations scholar, wrote in his article "The False Promise of International Institutions" that "the most basic motive driving states is survival. States want to maintain their sovereignty."

From the viewpoint of a realist, Ankara has repeatedly declared that this is all about "national security issue" and considers the Democratic Union Party (PYD) to be a terrorist group as the Syrian affiliate of the PKK. "For Turkey, there is no difference between the PKK and the PYD," Prime Minister Ahmet Davutoğlu said. Without mentioning the name of the Peoples' Democratic Party (HDP), Erdoğan also said: "I repeat my call to the party that has difficulty distancing itself from the terrorist PKK: Make your choice. Are you on the side of democracy or terrorism?"

There is no surprise at taking necessary administrative steps such as restriction on some civil liberties within the framework of a counterterrorism strategy. Governments have a set of tools, from military measures to judicial methods and negotiations, to respond to terrorism. Initiating a process of negotiations between a government and terrorist organization is also an option. In the case of Irish Republican Army (IRA), terrorism has not completely ended with the beginning of bilateral negotiations. The political wing, Sinn Fein, was in a position toward a political solution while the militant side was more skeptical of a political process. If the political process fails and does not bring the expected outcomes, then another option of terrorism will be ready as a traditional way.

According to a study by the Rand Corporation, "How Terrorist Groups End," there are five major ways to end any terrorist groups: Policing, military force, splintering, politics or victory. The policing approach is based on a police force defeating terrorist groups and involves "the use of police and intelligence units to collect information on terrorist groups." A "law-enforcement approach" which is based on "anti-terrorism legislation" and "criminalizing" of terrorist activities are both core features in defeating terrorism through this strategy. The study says this is seen as "the most effective strategy to destroy terrorist groups." Military force is already the clearest strategy, which includes using "military force to capture or kill key members of the terrorist group" and also "using military force against states that assist terrorist groups." From this point of view, using military force along with the policing approach and intelligence facilities becomes the most effective strategy against large insurgent groups. Politics, including peace settlement, always remains on the table as a strategy. The crucial point is that state authorities should have a willingness to bargain with a terrorist group. The most suitable case for this is the IRA, which ended its terrorist activities following bilateral negotiations. Then, the process was ended by the Belfast (Good Friday) Agreement which was announced on April 10, 1998.

Conversely, as Gülnur Aybet, the director for the BAUCESS Center for Security Studies, argues that the missing point in the IRA case is: "Never in history has an armed group ever successfully transformed into a legitimate political actor." For instance, both Sinn Fein and the IRA acted as separate actors in the peace process. In Turkey's case, the PKK and HDP could not behave as separate actors. Northern Ireland's case clearly indicated that, as a political actor, Sinn Fein ultimately represented itself as a "much more important actor than the IRA." This unfortunately has not been the case for the PKK and HDP in Turkey. In the last decade, Turkey has opened a window to negotiations, which aimed to open a political process by providing political legitimacy to the group as long as it gave up terrorist activities. This process, however, did not end successfully.

With reference to Walt's Foreign Policy piece "What Would a Realist World Have Looked Like?" we can continue to ask that had Obama been following a realist playbook, how would Turkey be seen and considered? Would it still be a strategic partner or a country where freedoms are in decline? Had Obama been a realist president or at least listened to any realist adviser, would Turkey be left alone, especially in its war on terrorism both at home with the PKK and abroad with DAESH and the PYD?

Last but not the least, the international system is alarming the time of realism from Atlantic and Europe to the Middle East and Asia-Pacific. It is time for offshore balancing and reading the U.S.-Turkey relationship accordingly.

* Ph.D. candidate at the Dept. of Political Science and International Relations, Bahçeşehir University