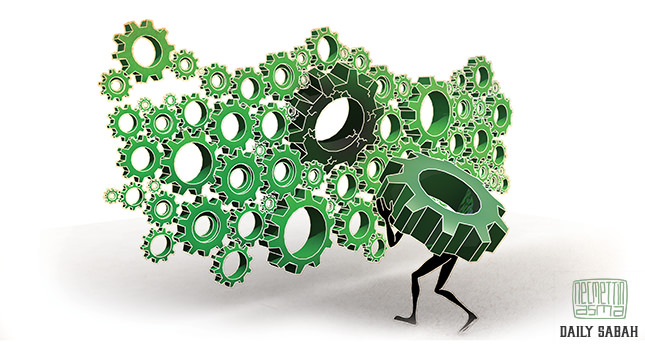 Since the foundation of the Republic, Turkey has had three constitutions, four military interventions and 64 governments in less than a century, which shows that something is wrong

Turkey has a grand vision of becoming one of the top-10 economies in the world, of escaping the middle-income gap and joining the ranks of high-income countries with per capita gross domestic product (GDP) of $25,000, of becoming a key player in global politics and a major contributor to regional peace and stability and of completing the transition to a full-fledged democracy, leaving the days of incomplete democracy behind. Turkey aspires to achieve this grand vision by 2023, but the biggest obstacle standing in the way in this quest is its political system. Without adopting a new constitution and shifting to a presidential system, Turkey's vision will become no more than a far fetched dream.

The Constitution is a remnant from the 1980 military coup led by Kenan Evren. Military officers and the bureaucratic elite took the lead in drafting a Constitution designed to maintain the military as the ultimate guardian and arbiter of the political system. Although Evren is gone, it is a tragedy that his Constitution is still living with us today, shackling Turkey as it tries to leap into the 21st century.

All parties in Turkey agree on the need for a new constitution, yet the parliamentary Constitution Conciliation Commission established during the last legislative period with three deputies from each party failed to draft a new constitution after deliberating for more than two years. What is more is that the proceedings of the commission revealed that the opposition parties in Turkey were not sincere in drafting a new constitution. This became apparent when the main opposition party Republican People's Party (CHP) refused to pass 60 articles that the commission unanimously agreed on despite repeated calls from then Prime Minister Recep Tayyip Erdoğan.

Opposition parties have rejected considering a presidential system outright without even engaging in any substantial discussions over which system is more suitable for Turkey's context and realities and which system will better safeguard fundamental rights, freedoms and separation of powers. Opposition parties have insisted that they will not accept any deviation from a parliamentary system. However, this line of argumentation is no more than a maneuver to derail any attempts to draft a new constitution that the country needs and deserves. In fact, a close examination of the current political system shows that it cannot be described as parliamentary, presidential or semi-presidential. It is rather a complex combination of all of these systems. This explains why the military Constitution has been amended 17 times in almost three-and-a-half decades and yet remains as confusing and convoluted as ever. Moreover, how can we talk about a parliamentary system when the president is directly elected as stipulated by the 2007 constitutional amendment?

The main reason Turkey needs to shift to a presidential system is to consolidate democracy by ridding itself from the remains of military oversight and bureaucratic tutelage and by closing the gap between the people and the state – a gap that has existed since the foundation of the Republic. Also, the nature of Turkey's political system, with its intertwined structure of the legislative and executive branches, prevents Parliament from performing its main duties of overseeing the government and acting as a check and balance to the executive branch. Thus a shift to a presidential system will ensure the true separation of powers, which is a cornerstone of any well-functioning democracy.

Within the executive branch there is a double-headed structure leading to the president and prime minister encroaching on each other's authority and opening the gates for the possibility of misunderstandings, disagreements and tension. Taking into account the recent disagreement between the President Recep Tayyip Erdoğan and the Prime Minster Ahmet Davutoğlu and Turkey's political history, one can easily conclude that this double-headed structure will continuously create serious turmoil and gridlock in the functioning of the executive branch.

Since the Justice and Development Party (AK Party) swept into sole power in 2002, stability has become an afterthought for many. But let us not forget that the political stability that came with the AK party is the exception rather than the rule in the country's political history, which has been characterized by political turbulence, government crises and short-lived Cabinets. We were reminded again of the prospects of instability after the June 7, 2015 elections when no party attained the required parliamentary majority to form a single-party government and the political parties failed to form a coalition government. Faced with this deadlock, Turkey was forced to go back to the ballot box on Nov. 1, 2015. Fortunately, the second time around produced a single-party government, but the question still remains of what would have happened if the results of the Nov. 1 elections were similar to the June 7 elections and no government could be formed. Opponents of the presidential system have still not been able to offer a convincing answer to this question.

Turkey's political system suffers from chronic problems. A new civilian and democratic constitution, an effective executive branch and an independent legislative branch able to check and balance the executive are needed. The sooner Turkey leaves discussions about semantics and definitions and lunges into substantive discussions about how to transform the political system the better.