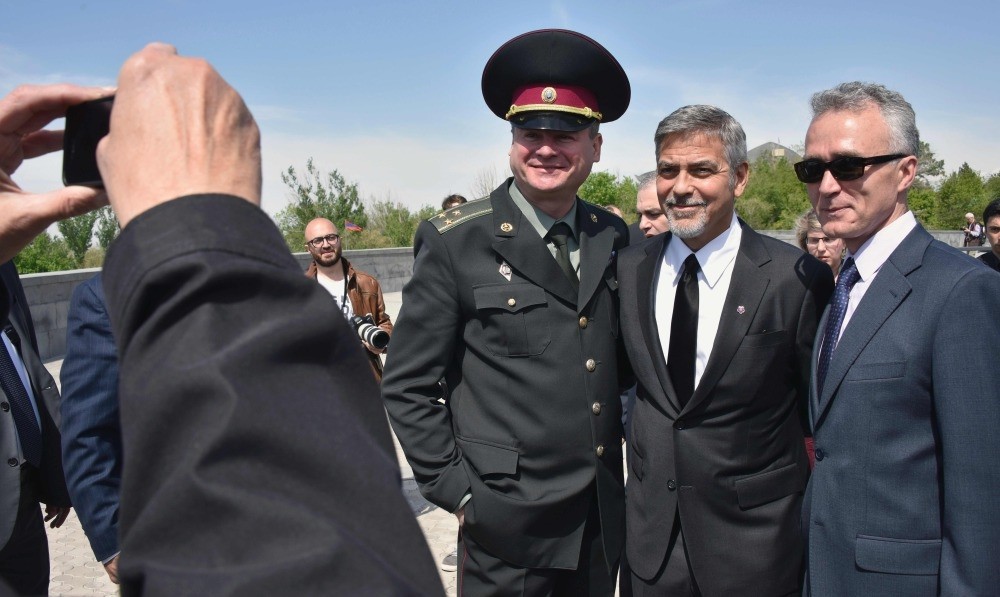 Without any qualifications or prior knowledge, celebrities such as George Clooney, seen here in Armenia, find it appropriate to pontificate about what really happened in 1915 rather than leave the matter to the historians.
by Maxime Gauin May 21, 2016 12:00 am

The commemorations in Yerevan, of the "Armenian genocide," last month confirmed the difficult situation of the Armenian government. Indeed, after its defeat in front of the European Court of Human Rightsin the Perinçek v. Switzerland) case, it now tries to attract attention with distribution of prizes not related to the tragedy of 1915-16 and with artists without any competence to decide about history such as George Clooney. Correspondingly, in Paris, the Coordination Committee of France's Armenian Associations could not welcome any speaker of higher position other than the under-secretary for European affairs, in strong contrast with the previous year.

Yet in Germany, some politicians pursue their effort to revert the official position taken by Berlin at the beginning of 2015. At that time, the German government had explicitly refused to endorse the "Armenian genocide" claims because of the absence of any verdict by an international court. Without surprise, this statement infuriated those who think that the history of Turks and Armenians must be decided by people who are mostly unable to put Erzurum and Bitlis on a map. As usual, they use as a reference Johannes Lepsius, conveniently forgetting the far rightist, racist and anti-Semitic views he openly defended, as well as his falsification of the German diplomatic documents he published in 1919. That falsification, exposed more than 13 years ago by Mustafa Çolak in the Vol. LXVI, No. 247, December 2002 Belleten of the Turkish Historical Society. Çolak indeed compared the version published by Lepsius with the original documents, and published facsimiles in an appendix to his paper. More recently, Lepsius's falsifications were analyzed by Guenter Lewy in his book "The Armenian Massacres in Ottoman Turkey." Correspondingly, it is now firmly established that the defense of Soghomon Tehlirian, the assassin of Talat Pasha in Berlin in 1921, to which Lepsius contributed, was based on an entirely fictional narrative of Tehlirian's life – see, for example, Jacques Derogy's "Resistance and Revenge" and Marian Nesrobian MacCurdy's "Sacred Justice: The Voices and Legacy of the Armenian Operation Nemesis."

The fact that an activist of this kind, who believed in the superiority of the "Aryan race" and placed this belief at the core of his thinking and action and lied to justify an assassination, remains a reference in the German federal parliament today is a fact, among others of course, to be discussed if you want to know the exact scope of the evolution of German society through the last seven decades.

Troubles of threat and threats of troubles

Beside the specific German case, and the recurrent use of Lepsius in spite of all the knowledge accumulated about him, this is a trend to use again and again. A striking example, especially since last year, is Zabel Yesayan (1878-1943). Yesayan is presented by various people, who, in general, never worked in any archive, such as William Armstrong of the Hürriyet Daily News, simply as a writer and a sincere believer in Ottomanism, and so as a reliable source. In fact, Yesayan was an extreme Armenian nationalist. She represented the Delegation for Integral Armenia, namely the claims for an Armenia from the Caucasus to Mersin, in Adana, after World War I. That delegation was dominated by the Ramgavar Party, a nationalist organization blamed by French officers for the crimes and indiscipline of the Armenian Legion, especially during 1919 – a claim based on vitriolic letters sent by the Egyptian branch of the Ramgavar Party "preaching rebellion" and calling France "this bitch," leading it to be seized by the French censorship office. Understanding by mid-1920 that the French occupation of Cilicia would end without the establishment of an Armenian state, Yesayan went to Istanbul and, without realizing the counterproductive effect of her statement, threatened the French High Commissioner Albert Defrance. In case of a French withdrawal, "the Armenians must provoke troubles and incidents with the Muslims, to force the French to remain or to intervene." These were not empty words, as "the Armenian notabilities of Smyrna contributed 100,000 liras to support or create fighting organizations, with the goal to provoke troubles and to force the French to intervene," Albert Defrance sent in a telegram to the Quai d'Orsay on July 4, 1920, now held at the Archives du ministere des Affaires etrangeres, La Courneuve, microfilm 16 674.

More dramatically, on June 12, 1920, a few weeks before Yesayan's threat of "troubles," a group of Armenians and Assyrians had killed 45 Turks, mostly women and children, in Camili, a village close to Adana. Some victims were "horribly mutilated," according to Captain Dromard, who wrote the report on the massacre. One main perpetrator was shot without trial by French officer, Lieutenant Jacques Lemaigre Dubreuil, and his men; the 26 others were sentenced by the French military court of Adana, including five sentenced to death. Then, the anti-Turkish riots, organized by Armenian nationalists on July 10, 1920 virtually emptied the city of its Muslim majority. Completely exasperated, the French administrator, Colonel Edouard Bremond, ordered the Armenian and Assyrian criminals to be hanged without trial and to expose the dead bodies publicly (see his order dated 10 July 1920 in Centre des archives diplomatiques de Nantes [CADN], box 1SL/1V/139). Five Armenians and one Assyrian were executed on the gallows and a sixth Armenian was shot when he tried to escape. Actually, only this radical measure was able to restore some calm. At the same time, Paul Bernard, in charge of the finances of the French administration, expressed his ire in his personal diary with wording that makes even more sense when one knows the threats from Yesayan about troubles: "The Armenians do what they can to compromise us: That is the truth." Following the anti-Semitic tradition of Armenian nationalism, and perhaps wanting to target a community traditionally linked to both France and the Ottoman government, Armenian plunderers attacked the synagogue in Adana (see the report of Major Tommy Martin, dated Aug. 1, 1920, in CADN, box 1SL/1V/135).

That was the true face of Yesayan and the context of her warning. Eventually, these threats were partially carried out when Armenian nationalist groups pressured their coreligionists – about 60,000 people– to leave Cilicia with the French army at the end of 1921, and to prevent coexistence, was especially an economic concern, by the Kemalist government as well as by the French one, for financial reasons primarily as building houses for about 60,000 people in Syria and Lebanon was expensive. Indeed, as observed the report of the French commission of evacuation, the withdrawal and the arrival of Turkish troops were "nowhere marked by any incident," but on Dec. 9, 1921, the heads of the – Orthodox, Catholic and Protestant religious communities – had to state to Henry Franklin-Bouillon, the main French negotiator, that the lives of the Armenians who wanted to stay were threatened by their extremist coreligionists. That is the main reason why there are almost no Armenians in the region today. The 1915-16 relocations by the Ottoman army, decided as a counter-insurgency measure, are one of the reasons for the demographic losses – deaths and migration – experienced by Ottoman Armenians. It is far from being the only one.

As a result, I would like to say to politicians, actors and singers who seem to forget their actual roles: Please leave history to historians.