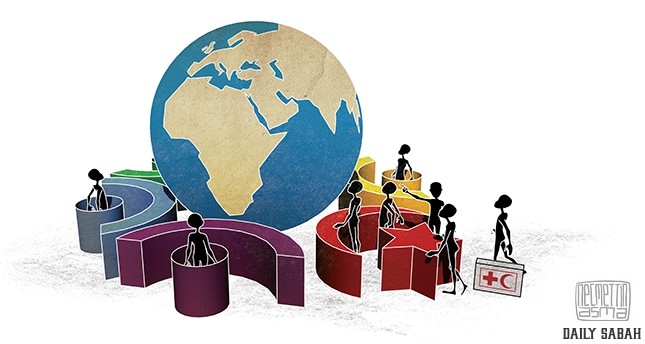 Illustration by Necmettin Asma - twitter.com/necmettinasma
by Recep Tayyip Erdoğan May 23, 2016 12:00 am
The World Humanitarian Summit, the first United Nations conference in history geared toward reforming the traditional humanitarian and development system, will take place in Istanbul on May 23-24, 2016. The event, proudly hosted by the Presidency of Turkey, represents a historic effort to overcome present challenges and take necessary steps to render the system capable of dealing with future problems. More importantly, it is an opportunity to send a message to oppressors worldwide that the international community remains committed to making the world a better place.

For the first time in history, politicians, aid workers, donors, the business community, government agencies and those affected by crises will join forces in Istanbul to find effective solutions to a common problem.

The title of U.N. Secretary-General Ban Ki-moon's report for the World Humanitarian Summit speaks volumes about why the organization decided to hold this historic conference in Turkey: One humanity, shared responsibility.

Turkey is the origin of idea that fellow human beings are one and the same. Thirteenth-century Muslim poet Jalaluddin Muhammed Rumi, who remains a symbol of tolerance, compassion and goodness today, spent a significant part of his life in Konya. His resting place draws in millions of visitors every year, who recall his eternal words: "Come, come, whoever you are. Wanderer, worshipper, lover of leaving. It doesn't matter."

Like Rumi and other advocates of one humanity, Turkey's current leadership appreciates the importance of helping fellow humans. Today, Turkish humanitarian and development workers remain active in more than 140 countries on five continents. Every year, Ankara spends more than $6.4 billion to feed the hungry, heal the wounds of conflict and disaster and make it absolutely clear that the world will be a better place tomorrow if we just try.

In recent years, the Turkish flag has become a symbol of hope for earthquake survivors in Nepal, impoverished farmers in Somalia and millions of Syrians escaping one of the most violent conflicts in recent memory, among others.

In 2015, Turkey became the largest refugee-hosting country by taking in nearly 3 million Syrian victims of war. At this time, Ankara provides free housing to some 280,000 Syrian nationals at 26 temporary housing centers equipped with hospitals, schools and sports facilities. Since 2011, Turkish doctors performed several thousand surgeries on Syrian refugees, who are eligible for free healthcare under the temporary protection status. Meanwhile, Turkey considers the education of Syrian children a key priority. At this time, a total of 330,000 Syrian refugee children, 80,000 of them in refugee camps, have been brought back to school. We aim to push this number up to 460,000 by the end of 2016 and reach all of them by 2017.

At the same time, Turkey shares the secretary-general's concerns about shared responsibilities.

In 1624, English poet and cleric John Donne coined the phrase "No man is an island." In today's globalizing world, where opportunities and threats alike extend beyond national borders, his message rings truer than ever. Yet most countries are left alone to deal with the consequences of regional and global problems.

Turkey, for one, has been experiencing this issue for several years. To address the humanitarian crisis in Syria, Ankara spent more than $10 billion on humanitarian relief at home and abroad. Turkey-based nongovernmental organizations and others contributed a similar amount to people in need. During the same period, the international community's contributions amounted to less than $500 million. In other words, the Turkish government has matched each dollar with 20.

Across the Middle East, North Africa, Sub-Saharan Africa and Southeast Asia, weak states with limited means shoulder the burden of humanitarian crises as the world watches from afar. Where the international community is able to make an impact, the solutions are usually incomprehensive and incapable of promoting long-term change.

To address pressing problems and prepare for the future, we must develop an international mechanism with an eye on burden-sharing and a reform of the United Nations Security Council, whose structure played a destructive role in Syria and elsewhere.

At a time when humanity faces greater challenges than ever, the World Humanitarian Summit is no ordinary international event. It has the potential to be remembered as a turning point in history for millions of people around the world whose lives depend on the good will, intelligence and creativity of fellow humans. It could also be remembered as a missed opportunity by future generations, who won't be kind in their judgment if we fail them.
RELATED TOPICS