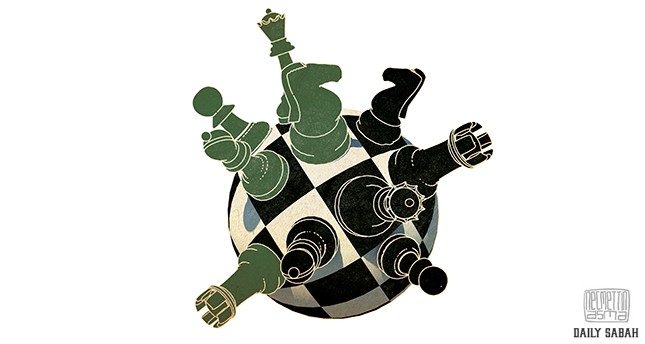 Illustration by Necmettin Asma - twitter.com/necmettinasma
by Fadi Farasin May 24, 2016 12:00 am

Turkey will host the first-ever World Humanitarian Summit in Istanbul on May 23-24, which is a testament to Turkey's moral and humane foreign policy

Humanity is witnessing the worst level of suffering since the end of World War II. People's desire for dignity and democracy has been crushed in the Middle East and elsewhere and the world has decided to turn a blind eye to the atrocities and war crimes committed against Palestinians and the people of Arakan. Rather than standing up for morals and values and protecting the vulnerable and oppressed, Western powers have decided to treat morals and politics separately. It is in these desperate and dark times that we have seen the emergence of Turkey's foreign policy grounded in the principles of human rights, morality and justice. This foreign policy gives the people of this region and the entire world a glimmer of hope and a promise of salvation.Turkey has been spearheading the challenge to the unjust international order. There is something profoundly wrong with a system that allows any of the five permanent members of the United Nations Security Council to block the will of all the other nations on earth for no other reason but to serve their selfish national interests. This is why President Recep Tayyip Erdoğan's mantra, "the world is greater than five," has resonated with masses around the globe and has become a rallying cry for people who want to reform the United Nations and its Security Council to become more democratic, just and inclusive.

THE WORLD IS GREATER THAN FIVE

It is not just "the world is greater than five" that struck a chord worldwide, but also Erdoğan's heroic "One minute!" statement at Davos, which shocked and awakened the sleeping conscious of the world. Erdoğan courageously condemned Israel's gruesome, December 2008 to January 2009 offensive on Gaza and castigated Israel and its then President Shimon Perez for acting like a child-killing machine. After the military coup in Egypt in 2013 that overthrew the only democratically elected president of Egypt, Mohamed Morsi, and suspended the Egyptian constitution, Turkey once again demonstrated that it is the international voice of democracy and freedom. Ankara condemned the military coup and continues to criticize it to this day while Western powers pay no more than lip service to the values of democracy and at the same time opportunistically continuing to deal with the instigators of the military coup, welcoming the leader of the military coup, President Abdel-Fattah el-Sissi, in their capitals and signing weapons deals with the Egyptian military. Turkey's defense of human rights and denouement of military aggression is not limited to its region, but extends globally. Turkey was critical of Russia's aggression against Georgia in 2008 and Ukraine and the forceful and illegal annexation of Crimea in 2014. Turkey also continues to disapprove, albeit guardedly, of China's violation of Uyghur human rights in East Turkestan.

Turkey has also been a leader in promoting harmony and enhancing greater understanding among diverse world civilizations and has been proactive in trying to diffuse mutual suspicion, fear and tension that have been accumulating since the begging of this millennium between the Muslim world and the West. Turkey and Spain in 2005 jointly launched the Alliance of Civilization initiative to garner a broad coalition to foster cross-cultural tolerance and understanding. This initiative was then adopted by the U.S. secretary-general to become a U.N. initiative.

THE SPIRIT OF CIVILIZATION IN ANATOLIA

Not a long time ago Turkey was a recipient of international humanitarian aid, but since the Justice and Development Party (AK Party) swept into power in 2002, the picture has dramatically changed and Turkey has emerged as a major international humanitarian aid donor. According to the Global Humanitarian Assistance (GHA) Report 2015, Turkey is the third-largest donor by volume and the second-largest by percentage of gross national income (GNI) when taking its response to the Syrian refugee crisis into account. Turkey has responded to a large number of human crises that have struck around the world, but the highest profile and most telling humanitarian intervention was in Somalia through direct presence on the ground when many other international actors were absent. Somalis still remember with great admiration the summer day in August 2011 when Erdoğan ignored the perception of Somalia's capital Mogadishu as a dangerous, no-go zone and traveled there accompanied by his wife, daughter, senior Cabinet members and a large delegation of representatives from nongovernmental organizations and business leaders. The visit helped propel the plight of the Somali people to the top of the world agenda and ended the two decades when no non-African world leader visited Mogadishu.

In its response to the Syrian refugee crisis, Turkey has provided the world with a lesson in morals and humanitarianism. Turkey has taken in 2.75 million Syrian refugees, according to the numbers from the United Nations high Commissioner for Refugees, thus making it the biggest refugee-hosting nation in the world despite the steep economic, social and security cost it has accrued. Contrast this with the European Union, with its 28 member states, that has cracked under the pressure of welcoming 1 million Syrian refugees last year and has expended every effort to transfer the burden to other countries and dissolve itself from the legal and ethical responsibilities to people escaping the carnage of war and violence. It is also important to note that Turkey's humanitarian foreign policy is not limited to its neighbors or the Islamic world, but is truly blind to ethnicity, religion and sect, extending to faraway places such as the Philippines, among many others.

Turkey's moralpolitik is a refreshing departure from the prevailing realpolitik in international relations. It also serves as an inspiration to other countries to ground their foreign policy in the universal values of ethics and humanity. If other countries follow Turkey's lead then we can aspire to a world characterized by harmony, peace and coexistence.

* Political researcher and analyst based in Ankara @fadi_farasin
Last Update: May 24, 2016 1:54 am
RELATED TOPICS