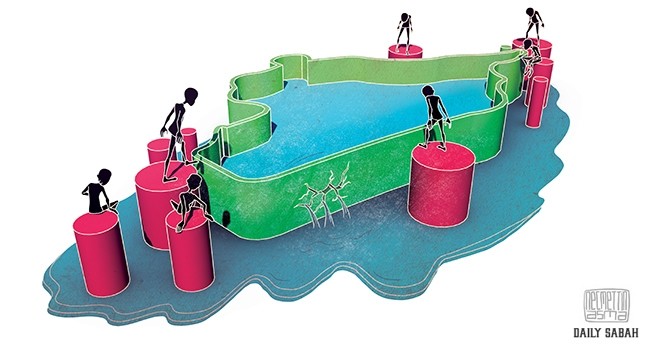 Illustration by Necmettin Asma - twitter.com/necmettinasma
by Göktuğ Sönmez* - Sertaç Canalp Korkmaz **
May 31, 2016 12:00 am

The Arab Spring has led Syria to become a failed state, bringing with it regional and global turmoil such as terrorism, the refugee crisis and foreign fighters

Following the Arab Spring, which had significant impacts over a wide geographical area in North Africa and the Middle East, many states were perceived to be on the way toward transformation into either failed or democratic states. So far, none of them have succeeded in turning into democratic regimes.

For the disciplines of both political science and international relations, states are of great importance, especially after the Westphalian order was established. The state, both within its national borders and on the international stage, is the apparatus that enjoys not only sovereignty, but also the monopoly of legitimized power. Applying this legitimized power within its national borders has been a controversial issue due to humanitarian and judicial concerns. It is a controversial issue how and under what conditions states can practice this right and whether they can do so against their own populations when necessary. Once a particular state crosses these boundaries and steps into the realm of practicing state terrorism, then the ensuing civil war ads bloodshed as in Syria where democratic and peaceful protests turned into a fully fledged civil war thanks to Bashar Assad's ruthless conduct and insistence on keeping his position.

The key indicators of how states turn into failed states according to the Weberian conceptualization can be summarized as the incapacity of the state mechanism to deliver basic public services, collapse of the legitimate authority of the state to provide security and conduct policy-making processes and significantly diminishing control of the state over a particular portion of its territory. Even though there have been some controversies over which states can be called failed states, the recent case of Syria seems to leave no room for detailed investigations or time-consuming brainstorming and discussion to be recognized as one.

As a consequence of the Assad regime's ruthless oppression of the Syrian people, millions of Syrians have become internally displaced people and others had no choice but to flee to neighboring countries such as Turkey, Lebanon and Jordan. Not surprisingly, the refugee flow and accompanying economic difficulties are not the only dimensions of the problem. On the one hand, the consequences, overall, have been a matter of human security and, on the other, security-related issues do and will likely increasingly emerge. In Europe, where refugees have not found the hospitality they were looking for, coupled with Islamophobia, radicalization has found fertile ground. It follows that this fertile ground provided terrorist groups with their desired human capital, too. Radicalized people have easily moved to the recruitment stage and ended up traveling to Syria, Iraq or Libya in order to join terrorist organizations. Within this context, it is noteworthy to investigate some key pull and push factors in order to have a more comprehensive grasp of the radicalization process and an individual's path to becoming a foreign terrorist fighter. Among these, some of the key motivations are listed in the literature as living in a failed or weak state, lack of trust in politicians stemming from corruption and nepotism, personal and communal grievances, feeling of being marginalized and disgraced, lack of proper education on the issues on which people are radicalized, lack of equal access to economic and political opportunities and being on a search for identity.

In the Fragile State Index, which is published by the Fund for Peace, Syria, due to its ongoing civil war, has significantly climbed up on the list since 2010. Whereas it was 48th in 2010 and 2011, it was 23rd in 2012, 21st in 2013, 15th in 2014 and ninth in 2015. Due to having a 911-kilometer border with Syria, along with cultural and historical links with the country and the region, a neighboring failed state unsurprisingly threatens Turkey's national security. By utilizing this failed state, many terrorist groups have found the chance to establish a presence in Syria to train their militants, to recruit new militants, to get more weapons and to manage illegal trade to finance their activities around the world.

Turkey, Syrian civil war and coping with the terrorist threat

Terrorist attacks conducted in Turkey since July 22, 2015 cannot be understood without taking the Syrian civil war's spill-over effects into account. The PKK not only tries to make the most of the new environment under the current circumstances where it also enjoys outside support more overtly with its affiliated Democratic Union Party (PYD), which has been portrayed as a liberating, secular force. Based on this assumption, the PYD has been enjoying Western funding and support. The PKK has also revised its fighting methods in line with the experience it gained in Kobani, exemplified in the evolving patterns of ongoing urban warfare in Turkey's southeastern cities. Thus, one could say that supporting a terrorist organization would also have regional repercussions with the spill-over effect to neighboring countries, especially when social and cultural affiliations are shared over a wide geographical area.

Use of Turkey as a transit route by foreign terrorist fighters in order to reach Iraq and Syria does not only significantly increase the security burden Turkey has to bear, it also makes it more vulnerable to terrorist attacks since these individuals might also carry out bombings in the countries they want to reach as well as in the countries they travel through, and even where they depart from a shared land border. As a result of this dimension, DAESH have conducted different types of terrorist attacks so far, from suicide attacks to gun and even rocket attacks. To give a brief list of the attacks with higher number of loss of lives, in June 2014, the Turkish Consulate in Mosul was seized by DAESH and 49 people were kidnapped and held captive for more than three months, including Turkey's consul-general; in Suruç in mid-2015, a DAESH suicide bombing took more than 30 lives; in Ankara in late 2015, this time a double suicide bombing killed more than 100; and two bombings in Istanbul in early 2016, one in Sultanahmet and one on İstiklal Avenue, killed around 20 tourists. In around 20 rocket attacks from DAESH targeting Kilis in 2016, around 60 individual rockets hit the city, 19 people have been killed and 70 injured.

With respect to the recruitment dimension, another important dimension is the individuals who leave their homes in order to join terrorist groups in Syria, such as al-Nusra Front DAESH or the PYD's People's Protection Units (YPG). From 120 countries around world in 2015, more than 30,000 foreign fighters left their homes to fight in terrorist ranks in Syria. Here it is important to note that whereas this number was less than half of this figure in 2014, there has been a significant demise in 2016, too. Therefore, the impact of the psychology of being on the winner's side and gradually moving to the loser's side should also be investigated. Whereas in post-mid-2014, DAESH increasingly has made territorial gains, the anti-DAESH coalition's efforts as well as other military mechanisms in Iraq and Syria made important progress changing this picture. In terms of Turkey's fight against DAESH, a few key figures would be helpful to see to understand how the country has been doing so far. Turkey has banned 37,000 people from entering the country, prevented 7,500 people from traveling to the country from Europe, arrested 1,100 people and sent them back to their home countries in Europe, deported 3,000 people, arrested 750 DAESH militants, prevented passage of 228,000 people to Syria and significantly improved its physical monitoring and passage-related capabilities on its borders using barbed wire and stone walls as well as increasing the frequency of patrol. Moreover, DAESH has been on Turkey's terrorist organizations list since 2013 and TWurkey has been a partner in the anti-DAESH coalition since 2014.

In sum, Syria stands out as an important showcase of how a state turns into a failed state and how this transformation can affect a broader region with spill-over effects from terrorism to refugee crises and from regional instability to economic devastation. One could argue that the current situation in the Syrian civil war, as long as the Assad regime insists on its ruthless fight to cling into power, will produce and reproduce new and current crisis-prone dynamics in a way that will put the whole region in danger. Also, due to the high level of internationalization of the crisis, further international points of divergence and tension can be expected in the foreseeable future among the major international players.

*Visiting researcher at the Center for Middle Eastern Strategic Studies (ORSAM) and doing his PhD at the School of African and Oriental Studies (SOAS).

**Research assistant at the Center for Middle Eastern Strategic Studies (ORSAM), and is doing his PhD at the Turkish National Police Academy.
Last Update: May 31, 2016 1:35 am