The hullabaloo over Turkey's accession to the European Union 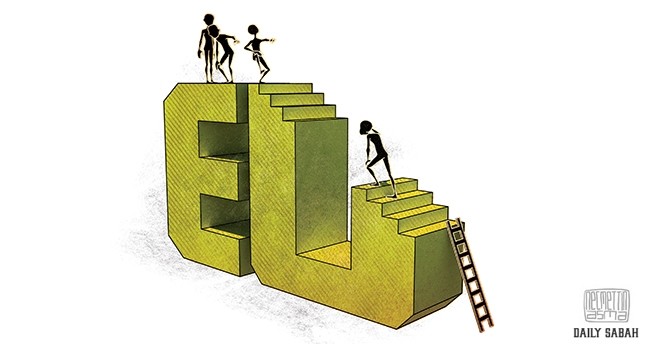 Illustration by Necmettin Asma - twitter.com/necmettinasma
by Ahmed Al-Burai Jun 06, 2016 12:00 am

It seems that being a predominately Muslim country, regardless of its traditional secularism, establishes an impediment to its membership

Binali Yıldırım, the new prime minister, said that "the muddle over the accession of Turkey to the European Union and the refugee issue must come to an end,". He recently reiterated: "It is time to faithfully know how the EU perceives Turkey and how sincere its intentions are."

There is a widespread perception that Turkey's enthusiasm to join the EU has genuinely dwindled. In 1987, Turkey moved to become a full member of the European Union. Since then, progress has hardly been any quicker, and Turkey is still in the waiting room.

A couple of days ago, British Prime Minister David Cameron jokingly told ITV's Robert Peston that at the current rate of progress, Turkey would literally need decades to join EU, in "about the year 3000." Cameron's comments followed remarks by his armed forces minister of state, Penny Mordaunt, who claimed that Turkey will be a member of the EU in the coming few years and the country would be incapable of vetoing that accession. Cameron, however, refuted Mordaunt's allegation, calling them "misleading and absolutely wrong."

Interestingly, the British prime minister was once an articulate advocator of Turkey's membership. Back in 2010, he proclaimed that he would do everything possible to guarantee approval of Turkey's bid. He even told then Prime Minister Recep Tayyip Erdoğan that he would fight for Turkey's right to join the EU because Turkey is vital, not only to the EU economy, but also to its security and diplomacy. He also condemned European racial allegations that constantly assert that Turkey can only guard the camp but cannot sit in the tent.

To be a member of the EU, Turkey has to get approval from all 28 member states in the European Council and European Parliament. All member states have the right to veto the inclusion of any new members. Turkey has to meet 72 benchmarks to be granted visa-free travel to the Schengen zone, ranging from biometric passports to jurisdictional collaboration.

It seems that few European countries are timidly in favor of Turkey's admission. The pretexts are cultural and geopolitical differences along with violations of human rights. Lately, Turkey has been severely criticized for the growing use of excessive power against terrorist insurgents in southern and southeastern provinces.

Cynically, the EU turns a blind eye to the escalation of terrorist attacks in Turkey and lets supporters of the outlawed PKK pitch tents near the European Council building in Brussels. Bizarrely, Turkish services have recently found American and Swedish anti-tank weapons with PKK fighters in the Nusaybin district.

On the other hand, the EU reticently expresses serious concerns over the mounting authoritarianism of President Erdoğan, who persistently pursues constitutional reform to bring about a presidential system to supersede the current parliamentary one.

The EU's pointless serious concerns are utterly unjustified, simply because Erdoğan has been calling for changes to the Turkish system of governance for years and has not tried to impose them the way dictatorial regimes and allies of Europe do. Needless to say, it is basically an issue of sovereignty, and only Turks have the right to decide. There is no need for those serious concerns, as Erdoğan's quest to change the governance system will basically only be realized through democratic tools.

Simultaneously, some EU representatives bring unsubstantiated claims that Turkey aims to lengthen and exacerbate the Syrian civil war, making exceptional efforts to shell the West's Syrian Kurdish allies. Meanwhile, human rights groups have criticized the paradoxes of the Turkey-EU agreement on refugees, claiming that it violates EU law and constitutes a blatant breach of the U.N. Refugee Convention.

Some EU members have complained about Turkey's selfishness in blackmailing the EU to reward it with 3 billion euros in return for the migrant deal, which is already at risk of coming apart at the seams. They also complained about Turkey's selectiveness in refugee swaps, claiming that Syrian intellectuals and the educated workforce are being denied permission to be included in the pact in favor of uneducated immigrants.

German Chancellor Angela Merkel firmly defended the deal with Turkey. Merkel was Ankara's partner who masterminded the agreement to curb the influx of refugees to the Schengen zone.

Don't forget that Turkey currently hosts some 3 million Iraqi and Syrian refugees and spent over 10 billion dollars, is an example for the world to ponder, hoping that it might rekindle its collective conscience.

It seems that being a predominately Muslim country, regardless of its traditional secularism, establishes an impediment to its membership. However, embracing Turkey's attitude in the region would most likely expedite a joint, international military coalition against extremism in the region.

At Europe's behest, Turkey boasts a noble track record with regard to peacekeeping missions in Afghanistan, Kosovo and Bosnia-Herzegovina. It seems that Europe has dejectedly botched setting norms for a potential Muslim partner.
Last Update: Jun 07, 2016 1:00 am
RELATED TOPICS