How migration will influence our future or, why we should be more tolerant of the asylum seekers 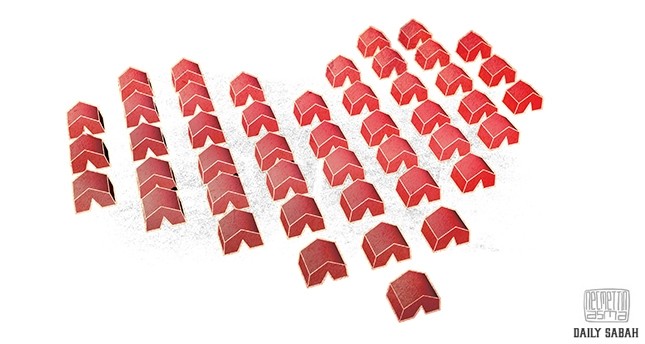 Illustration by Necmettin Asma - twitter.com/necmettinasma
by Yulia Kryvenko Jun 07, 2016 12:00 am

Scientific evidence shows that the first humans evolved in southern Africa about 2.5 million years ago. About 2 million years ago, some of these prehistoric people left their homeland to settle vast areas of Africa, Europe and Asia. If those people had not migrated, the human race would have died out. We know there were those crunch points in history when migration was absolutely essential for the survival of the human species. Our ancestors moved around the world for a period of about 20,000 years and, as they did so, they became smarter. But the most amazing thing began to happen with increasing frequency from about 100 years to 150 years ago when people started connecting again. European imperial expeditions transformed the history of the world; from being a series of histories of isolated peoples and cultures, it became the history of a single, integrated society. Technology improved rapidly as people came back together, with steam engines being invented to speed up transportation and production and cheapen it, humanity took a leap forward. This collective connectivity is what will keep driving us forward and lead to a period of incredible opportunities. But whether we will be able to take advantage of this opportunity will depend on our readiness to integrate with others and our being able to understand that any one country cannot solve its problems alone.

According to United Nations projections, 30 years from now developed countries will face severe labor shortages. Some scholars suggest a policy of having "head hunters" around the world looking both for skilled and unskilled workers. Fertility rates are falling much more rapidly than life expectancy is increasing. The whole world expects Africa will be well below the replacement level in 20 years. Because of these demographic trends, the labor forces in rich countries will decline from about 800 million to 600 million over the next 40 years. There will of course be changes in the nature of work, the age of workers and the time of their entry and exit and ideas of pensions and retirements will become a history. The story that we know about migration now is going to turn itself on its head through demographics, and when we combine this with economics, it will bring a totally different picture to life. Developed countries have to embrace migrants because they want their workers to be legal and pay taxes, and for that they have to be documented. This is especially clear in the case of asylum seekers who require refugees to escape death or persecution - although the ethical arguments for migration go well beyond these extreme cases. Refugees are migrants who are leaving home to save their lives and their children's lives. There are about 20 million refugees in the world and over half under the age of 18. Developing countries have taken in 86 percent of all refugees, and the number is growing. Massive influxes of people, over 1.5 million from Afghanistan to Pakistan and the over 2.5 million Syrians in Turkey are of concern to the international community while it is almost forgotten that at various times in the past, levels of migration were much greater than current levels, with up to a third of parts of Italy, Ireland and Scandinavia emigrating. Interestingly enough, it is rarely mentioned that most of them came back to their countries of origin. It should teach us an important lesson that when people are allowed to go home, they do. Despite the fact that most Syrian asylum seekers do not think they will have shelter when they return to Syria, they still want to go back to their country.

Generally, people do not want to leave home; it tends to be the last resort. Historically, migration always was a means for people to escape dire poverty, persecution and famine, and for communities to seek establishing networks to foster growth and diversify risk. The widespread adoption of passports over the past 100 years together with a quadrupling in the number of countries and increasingly stringent border controls has broken this historical pattern. While capital, goods and services can move more freely than ever before, the movement of people has never been more constrained. This has curtailed economic dynamism and growth everywhere, undermined poverty reduction and led to a great deal of unnecessary human suffering.

The impact on countries from which emigres come depends on how these countries respond to emigration. For example, the Philippines is a major exporter of teachers and nurses, but the country is not short of these professionals. As it has become the biggest export business for the Philippines, people often borrow money through the loan system in order to obtain an education and the borrower finds a job abroad and the loan is repaid. As we can see in the case of South Africa, Taiwan and Israel, when the diaspora population becomes active, engaged and connects to their country, they can support a process of social change. It is difficult to imagine these countries being what they are today without their diasporas.

WE ARE ALL MIGRANTS

When it comes to the impacts on the countries where migrants go to most, studies suggest that the outcome of immigration tends to be economically very positive even taking into account static comparative analysis without considering long-term gains from migration in societies. It is the social impact that people often worry about, and this drives a lot of the debate. Why are people so concerned about having too many migrants? It is partly because many countries are still very bad at distributing, absorbing, ensuring social mobility and inclusion. If by accident of geography a country happens to be the entry point for migrants, as Kilis province in Turkey is and which experienced a 30 percent increase in its population due to the influx of Syrian refugees, one can understand the local population's concerns about migrants. However, these concerns are about the failure of politics to be able to distribute migrants. Instead of being equally shared as a collective burden between all EU member states, refugees are trapped in Italy, Turkey and Greece. The free movement of people in the EU has been one of the success stories of our time. It has been a source of enormous benefit for Europe, not only in its economy by creating one space, but it also ended the prospect of war in Europe. But if one is coming from North Africa or Syria, one can only go to Greece or Turkey, and this is not part of that spirit.

On the international level, a successful policy on migration would be to create an international organization that includes most countries and has U.N. authority. On the national level, it is important to ensure that migrants identify with the societies they are in, feel part of it and know they are needed in the receiving society, have a place in its future and therefore can be part of it. Marginalization is found when people are disaffected, where they are not respected for who they are and what they bring. It requires governments to say that all migrants are good and that their jobs and welfare depend on them. And by the way we all are migrants." In the end, we will have to embrace migration, not only because it is our future in terms of our economic livelihood, but also because ethically and morally it is a right thing to do.