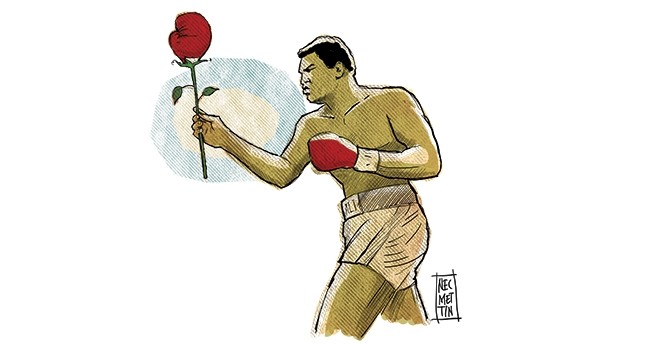 Muhammad Ali was a brave man who raised his voice against global, discriminative imperialism with words of wisdom

Len O'Connor: What is your real name?

O'Connor: Is that your legal name?

Malcolm X: As far as I am concerned, it is my legal name.

O'Connor: Have you been to court to establish that you are

Malcolm X: I didn't have to go to court to be called Murphy or John or Smith

O'Connor: I got the point. Would you mind telling me what your father's last name was?

The above conversation took place between Malcolm X and Len O'Connor on a television show in Chicago called "City Desk" on March 17, 1963.

CHOOSING CONSCIENCE OVER CAREER AND AN EASY LIFE

Based on the very tenet of the above conversation, Muhammad Ali refused what he called his slave name, Cassius Clay, and it is relayed that he first assumed the name Muhammad X before assuming Muhammad Ali. After making a conscious choice by accepting Islam rather than unquestionably accepting the identity that was given to him, Ali continued to make sure that his conscience and belief came before everything. It came before his title, fame or fears.

He refused to serve in Vietnam War and stood his ground firm when he was put under immense pressure, proclaiming:

"My conscience won't let me go shoot my brother, or some darker people, or some poor hungry people in the mud for big powerful America. And shoot them for what? They never called me nigger, they never lynched me, they didn't put no dogs on me, they didn't rob me of my nationality, rape and kill my mother and father... Shoot them for what? How am I going to shoot them? Poor little black people, little babies, and children, women. How can I shoot them poor people? Just take me to jail."

"Why should they ask me to put on a uniform and go 10,000 miles from home and drop bombs and bullets on brown people in Vietnam while so-called Negro people in Louisville are treated like dogs and denied simple human rights? No, I'm not going 10,000 miles from home to help murder and burn another poor nation simply to continue the domination of white slave masters of the darker people the world over.

In his final statement of why he was refusing to serve in the military in the Vietnam War, Ali not only refuted the Vietnam War's illegitimacy but the violence that certain groups like DAESH, Boko Haram and so on are currently claiming to be carrying out in the name of Islam:

"If I thought the war was going to bring freedom and equality to 22 million of my people they wouldn't have to draft me, I'd join tomorrow. But I either have to obey the laws of the land or the laws of Allah. I have nothing to lose by standing up for my beliefs. So I'll go to jail. We've been in jail for 400 years."

What Malcolm X and Ali advocated for has never lost its relevance and probably has never been as relevant as now. Especially considering what Ali shared with us just before his death - his response to Donald Trump's daily offensive remarks about Muslims - is something that all Muslims have to reflect on a lot: "We, as Muslims, have to stand up to 'those' who use Islam to advance their own personal agenda!"

As the champion of conscience and identity has very rightly put, Islam has unfortunately been a handy tool for Western politicians to advance their agendas. This is unfortunately not restricted to Trump. Trump is one who perhaps without any calculation lets out some of what he thinks about Islam and Muslims. But there are a number of other politicians who belittle Muslims with humiliating talk of migration or scaremongering their fellow citizens with a Muslim flood into Europe or the U.S. Some like Nigel Farage, the leader of the U.K. Independence Party (UKIP) ,have unfortunately gone as far as generalizing migrants as perverts who will sexually assault British women.

All the corrupt political and economic failures in the Western world that have led to all European countries facing economic crises is being disguised by skillful politicians with deflection of attention and constant scapegoating of migrants who are belittled every day as people on benefits who are draining certain countries' resources. Having convinced the masses in various European countries and the U.S., migration, and in particular Muslim migration, is the wild card when it comes to almost every election or referendum.

Going back to what Malcolm X and Ali advocated for is of great significance. By assuming the "X" surname or the name Muhammad Ali, they refused their given identities. The main issue that Muslims face today is a lack of identity. Perhaps Muslims' names are not Murphy, John or Smith, but our souls and hearts have been conquered with cultures that are not our own. The issue that Malcolm X vigorously defied has never been deeper since the suppression of identity is no longer taking place in an overt manner, but in the sneakiest way possible with various social media tools.

Even when the suppression of identity is noticed, there is not the conscience that Ali showed by refusing someone else's war. Unfortunately, far from adapting Ali's brave steps, the Islamic world is so fragile that it is not able to refuse the ongoing various attempts of the suppression of cultural identity.

For the Muslim world to stop being a tool of political agendas, it needs to say loudly "no" to patching work that is attempted to be sown on Islam and Muslims or on any innocent group. Today, paying tribute to Ali with some fancy words would not be enough for Muslims or other people to fulfill our duties to brave people like him and Malcolm X. The true tribute will happen if Muslims could refuse whatever is not theirs, just like Malcolm X refused his surname, Little, and Ali refused his first given name, Cassius Clay Jr.