Where are conservative Kurds heading? 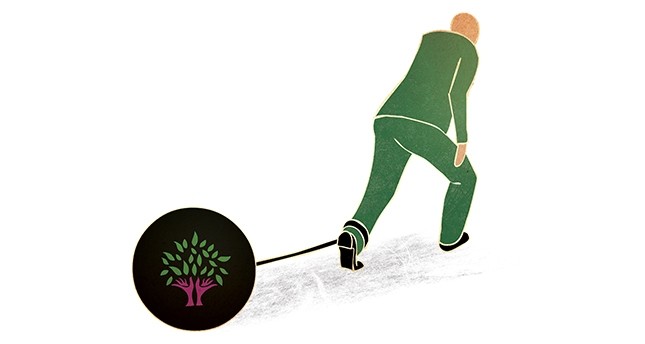 Many Kurds in Turkey are conservative and religious, which is why they do not support the PKK and its political wing, the HDP

Although feeble at the moment, there have been some ongoing debates on the possible split among Kurdish politicians between more moderate, conservative and more revolutionary or leftist elements of the Peoples' Democratic Party (HDP). As is well-known, the PKK was founded as a Marxist organization in 1978, and since it was outlawed, it immediately became affiliated and in solidarity with some legal parties in Turkey's political arena. None of these legal political parties has denied their connection with the PKK until today. Following the PKK, these parties have stood on the left of the political spectrum. In addition to PKK founder Abdullah Öcalan's Weberian charisma, the organization has adopted a utopic understanding of establishing a Greater Independent Kurdistan by uniting Kurds dispersed in four different countries. Ethnographically speaking, however, both of these propositions lack any empirical data, and especially the claim that Kurds have a dream of an autonomous Kurdistan does not have any substantial base without asking people's opinions on the issue. Therefore, both of them remain as the founding principles of the organization. In other words, the idea of an independent Kurdistan has been treated in terms of the discourses of Kurdish political movements.

At the time of its foundation, the prevailing political ideology in the world was the political left and the founding figures of the organization easily used the cliches of the alliance of worker-peasants, but without the intelligentsia, or the ideological and political leadership of the proletariat borrowed from Marxism. These class struggles were meaningful in many parts of the world three decades ago and also still have some appeal, but in today's contemporary circumstances of social democracy it seems to belong to an archaic period. The founders might have aimed to win the support of the Turkish revolutionary left at that time, but the suis generis problems of the Turkish left in the country did not allow them to enter into full solidarity with the Kurdish movement at all times. Relegating the movement to a class struggle and trying to emancipate a people with an independent nation-state at the same time was an oxymoron, bringing communism and nationalism together. Building a Marxist struggle on a nationalist premise is doomed to failure. That is why some parts of society considered the PKK to be a fascist movement. No matter how often the members of the PKK's executive board call and even beg for support and solidarity from Turkey's democratic forces, their voices are unheard by the larger society. People, no matter how sensitive they are toward the Kurdish issue, are fed up with the armed separatist movement in the quagmire of the Middle East. It has repeatedly been proven that the circumstances at the moment are not ripe for a revolution in Turkey. All in all, even the Kurdish bourgeoisie in Turkish metropolises has not been fully engaged with the struggle, although in the case of a successful revolution they would emerge as the sole beneficiaries. It is the Kurdish proletariat that has been suffering through all these years of armed struggle. It is easy to convince young boys to join the fighting forces for a variety of reasons like persistent unemployment and lack of a bright future, and young girls with a promise of self-emancipation from the rigid patriarchal system. However, it is obvious that under the circumstances of untamed capitalism and consumerism it would not be easy to recruit young people without any concrete evidence for a future victory.

Another reason for the failure of the movement is that its legal extension, the HDP, could not distance itself from the selfish and greedy demands of the warlords dwelling in Northern Iraq's Qandil Mountains in order to pursue a democratic struggle in Parliament with their sizable representation. Furthermore, the recent trenches and barricades policy of the organization fighting against security forces was the last straw for many inhabitants of Kurdish towns, as many of them have lost their homes, jobs and hopes for the future. Now, some of the Kurdish public, especially the religious and conservative segments, have come to a conclusion that Islam is the glue or cement of the people in Turkey. The leftist discourse of the HDP or PKK does not reach a large audience anymore, and on the contrary, local people and even some HDP lawmakers have loudly criticized it.

For many observers, the PKK's so-called success in the region was something unexpected because sociologically and generally speaking, many Kurds are not even secular, let alone support a leftist organization. The moderate Islamist Justice and Development Party (AK Party) has always secured some parliamentary chairs from the region in all elections and before the AK Party, right-wing political parties had done the same. The only two other political parties, the Republican People's Party (CHP) with its secular, Kemalist and leftist policies, and the Nationalist Movement Party (MHP), could not get any representation from the Kurdish constituencies. Yet a tiny Kurdish political party, the Free Cause Party (Hüda-Par), with its Islamist policies of democracy and solidarity with the oppressed with an aim of constitutional recognition for Kurds would get more votes than the other two parties in the region.

So, upon the HDP's failure to become one of the established parties in Turkey as a result of recent PKK terrorist attacks, it seems inevitable to split to win the hearts and minds of conservative Kurds who have emotionally been detached from both the state and the AK Party to secure a considerable amount of votes from the AK Party in the Kurdish dominated southeast. Hence, it would not be a surprising development in Turkish politics if some HDP deputies leave the party and establish a new one with an emphasis on Islam.