Assad moves on with anti-DAESH PR campaign, as Fallujah and later Raqqa will be great prizes 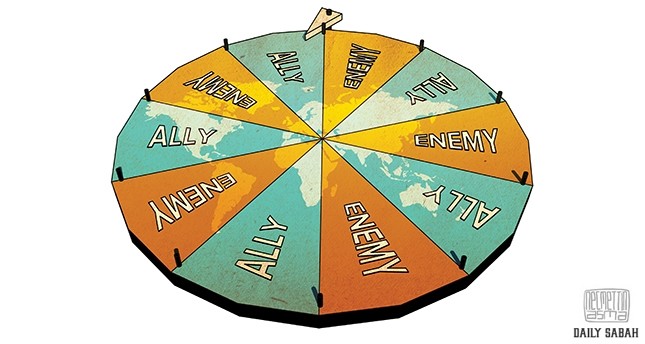 Illustration by Necmettin Asma - twitter.com/necmettinasma
by Martin Jay Jul 05, 2016 12:00 am

Can old enemies be new friends? Turkey's downing of the Russian jet has made Turkey pay a heavy price, but now it is time to rebuild relations with both Moscow and Damascus

What we are witnessing in Iraq and Syria is what many pundits call a tipping point. In a month in which rumors of the death of DAESH leader Abu Bakr al-Baghdadi stormed the Internet, the Middle East press pack also devoted many columns to the reinvention of Bashar Assad.

A recent bold statement by the Syrian leader seems to have been a signal of his intention to delay peace talks as much as possible and fight DAESH head on in a bid to worm his way back to being seen as a dictator with whom we should all work with - better the devil you know.

His tactic is simple. He wants to be seen retaking as much DAESH territory as possible and hopes that manufactured media reports will galvanize this idea so that Washington might feel ostracized by European countries that are already saying we should open dialogue with him. Furthermore, Washington is certainly feeling out in the cold in the Middle East following a move by Russian President Vladimir Putin to strengthen his relations with both Israel and now Turkey. The double move has made many wonder if the Israelis will be the new key ally in the region and whether Turkey is ready to show the world that it is capable of straddling both NATO and Russian camps without Ankara splitting its trousers.

Ideologically in Syria, you could not find two sides of the same coin when it came to Assad, but Putin's moves towards firstly welcoming Turkey and Israel by burying the hatchet and rebuilding relations, and secondly, getting Turkish-Russian relations back to what they were previously to the jet downing, are interesting.The Russians are preparing for a new post-Syrian civil war situation. And despite Putin's previous vitriol toward Turkey, Ankara is not a natural enemy of Moscow, and as with Turkey's relations strengthening with Iran, President Recep Tayyip Erdoğan needs all the friends he can get in the new war in the region against Kurdish radicals.

It is complicated, but Putin has already taken the initiative to try and simplify the checkered landscape into the three convenient categories of friends, foes and our friends' enemies.

The adage "my enemy's enemy is my friend" does not apply to Syria. It is simply impractical and Turkey has learned only too well that it has much to gain by playing uber-diplomacy in the region and keeping cordial relations with Iran and Israel, and perhaps, now Assad. As U.S.-led coalition bombing helps Assad take key DAESH positions like Palmyra, it has also helped the Democratic Union Party's (PYD) People's Protection Units (YPG) militia take more ground. This has focused the minds in Ankara and a new mindset is evolving. Could Turkey help restore Assad's legitimacy as the race to take Raqqa begins in exchange for an alliance against the Turks in northern Syria?

Raqqa would be a real game changer if Assad could take it. The media coverage alone would pound the point home to stubborn Washington officials that, just like in 2007, he is a regional player worth getting on the right side of.

But before that, Fallujah had to fall, as it is of critical significance to the region.

It stands just a stone's throw from the Iraqi capital Baghdad and for many, remains a thorn in the side of Iraq's Shiite elite in Baghdad. The Iraqi army's victory there could also be a deal breaker for Iraq's troubled leader, Prime Minister Haider al-Abadi, a Shiite who was elected in 2014 on the promise to mend rifts with the Sunni Muslim minority and the Shiite militias backed by Iran.

Yet, Fallujah might not have even happened due to rifts between Shiite groups there who cannot even put aside their bickering and differences on how to take it. And to some extent, it is America's fault, as, once again, Washington dallies with the battle plans but steers away from protracted battles that could last months.

It is hard to believe, but Abadi is still under the whip of senior U.S. officials who, according to trusted sources, recently advised him to divert important army units away from Fallujah to head to Mosul instead. This move angered many militia leaders who were spearheading the battle, leaving plans for the moment on hold and eliciting two key questions that many in Iraq struggle to answer - what should be the next key town to be taken back from DAESH and who, politically, are the winners and losers?

Mosul, although important, is not considered such a prize by many, as it is seen as a provincial Sunni town of little importance. Fallujah, however, which is also Sunni, has a bloody history of insurgency, which needed to be conquered, and the Shiite militias were certainly lining up to do the bidding. Sheikh Aws al-Khafaji, the leader of the Abu al-Fadl al-Abbas brigades, an Iraqi militant group, which is part of the pro-government Popular Mobilization Forces, did not mince his words: "This is our opportunity to cleanse Iraq by eradicating the tumor that is Fallujah."

Even Sunni tribal fighters agree that it should be the Shiite-dominated militias that should take back Fallujah rather than the Iraqi army.

Washington is also confused and is still plagued by the curse of this town, struggling to admit that its senior military planners have got it wrong again. A 17-month training program for the Iraqi army was deemed useless due to the type of fighting involved in Fallujah and the usual suspects of army and fringe and mainstream militias are still bickering over the spoils of the battle.

Falluja is important though. It was the first city DAESH captured in Iraq, in January 2014, six months before the group declared its caliphate in areas of Iraq and Syria. Abadi has expressed hope that 2016 will be the year of "final victory" over DAESH, with the capture of Mosul. And so it was Abadi who pushed for Fallujah, as experts said taking it would galvanize support for his leadership, which has taken a number of knocks in recent months. For Assad in neighboring Syria, who is fighting alongside the same allies, Raqqa will be harder, but worth the fight.