Golden recipe for Turkey and Israel 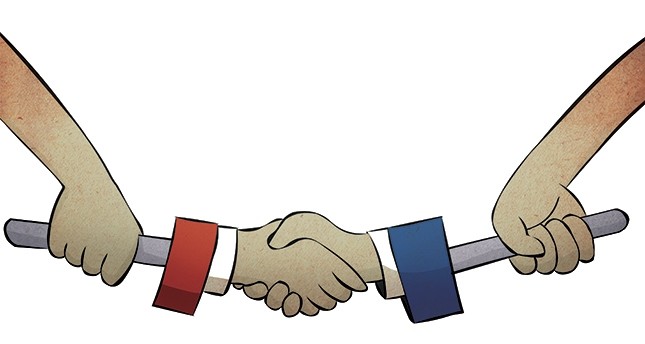 Illustration by Necmettin Asma - twitter.com/necmettinasma
by Karel Valansi
Jul 11, 2016 12:00 am

A rare rapprochement is currently taking place when everything else is sort of falling apart in the Middle East. Israel and Turkey finally signed a normalization deal after six years of diplomatic impasse. It is expected that the two countries will exchange ambassadors in a matter of weeks.

Following the Mavi Marmara incident, Israel had already offered an apology for the deaths of nine Turkish citizens and a Turkish-American and it had also agreed to pay compensation for the victims' families. Ankara had demanded the lifting of the naval blockade in Gaza, which was unacceptable for Israel from the very beginning. At the other end, Israel demanded the dropping of lawsuits against Israeli military officials and dismantling the Hamas quarters in Turkey that serves for planning terrorist attacks against Israel. One of the West Bank leaders of Hamas, Saleh al-Arouri, was already expelled.

There is nothing new in the conditions set out in the reconciliation agreement. These conditions have been already known for years. Turkey's relations with Hamas and the naval blockade of Gaza have been the main complications since day one. What is new is that at the end, both countries' leaders had decided that the right time had finally come. They worked hard to find the perfect recipe during negotiations. Following all the populist statements against each other, both leaders presented the deal as their own victory, although there is no one who gained 100 percent of what they wanted.

Diplomatic talks aimed at repairing the six-year-old rift with Israel gained speed in December of last year as part of Turkey's foreign policy recalibration. This change had to come as Turkey's relations with its main source of energy, Russia, critically deteriorated after Turkish jets shot down a Russian fighter jet in November 2015. Turkey decided to diversify its energy resources to reduce its energy dependence on Russia. For Israel, Turkey is the most efficient and cost beneficial channel for potential natural gas sales to Europe. Turkey also needs Israel's military technology and intelligence cooperation for its own security concerns in Syria and terrorist attacks it faces at home as well as for its ongoing conflict with the PKK.

Only trade survived the turbulence during the impasse. Economic relations were the only spot where relations did not deteriorate. However, we are far from the days when Israeli football players were greeted in Turkey with chants of "I love you Revivo." Similarly, I do not hear İbrahim Tatlıses in taxis in Tel Aviv anymore.

There is an important group in Turkish society for whom Israel and Zionism are the enemy and fascism. On the Israeli side, some Israelis lost trust in Turkey. Building mutual trust and restarting cultural events to refresh the friendship between the two societies are the most important steps to proceed.

An important improvement was reached last week. For the first time in years, Turkish authorities invited Israeli Charge d'affaires Amira Oron to the Justice and Development Party's (AK Party) traditional iftar dinner for foreign ambassadors hosted by Prime Minister Binali Yıldırım in Ankara. Considering the lack of presence of the AK Party ruling elites in Israel's independence reception both in Istanbul and Ankara, this is important progress. The presence of Oron, the top Israeli official in Ankara, shows how diplomatic relations are improving following the reconciliation deal.

There is a recent study conducted by the Ankara Policies Center analyzing Turkish youth's perception of the relationship between Turkey and Israel. The crucial finding of the study is that Israel is perceived as an economic rather than a strategic military partner. Even though Israel is perceived as the most important country in the Middle East, it is no longer perceived as Turkey's gate to the West. There are no doubts regarding the Israel's legitimacy, but what people know about Israel does not exceed Jerusalem and the issue of Palestine.

Even though a deal has been reached, there is no magical formula to enter a new golden age similar to the 1990s. The alliance between the two countries may help bring stability to the region. In addition, leaving a door open for a future natural gas deal, forming a new alliance in these turbulent times and using Turkey's relationship with Hamas to prevent a future conflict in Gaza are the real logic behind the reasoning of the deal.

The author is a columnist with Şalom, a weekly Turkish-Jewish newspaper
Last Update: Jul 11, 2016 1:42 am