A coup de grace for coups 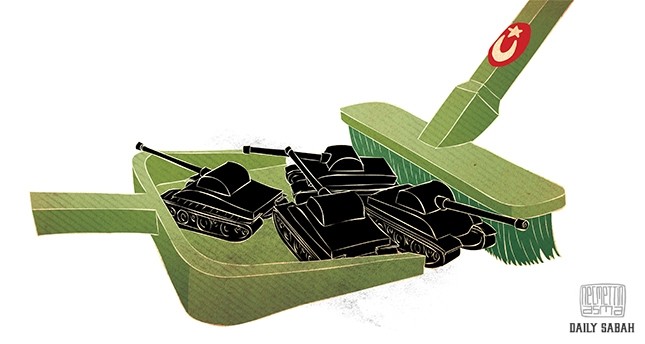 Like many people around the world, I watched the events of Friday night unfold with a mixture of foreboding and helplessness. Could it really be that Turkey would go the way of Egypt? The early signs were not good. For years Turkey's Justice and Development Party (AK Party) has been the subject of accusations of authoritarianism and fundamentalism. One could see how these accusations were condensed into justifications by the coup plotters who promised, without a trace of irony, "to reinstate constitutional order, human rights and freedoms." Like in Egypt in 2013 there was an initial reluctance to call this a coup. U.S. Secretary of State John Kerry in a statement spoke of uprising and continuity. Rumors spread by Saudi-owned media channels suggested that President Recep Tayyip Erdoğan had fled, and Islamophobes asserted that the real coup had been carried out by the AK party and, therefore, this was a chance to stop Turkey from becoming an Islamic state.

Thanks to the heroism of many people, including those who were killed, the plotters' plans were derailed and the coup failed. The decisive and resolute actions of the AK leadership, the willingness of the opposition parties to condemn the coup and the willingness of the supporters of the AK party and of democratic principles to take to the streets in defiance of the Orwellian-sounding "Peace at Home Council" and in defense of the legitimate government, were sufficient to roll back this coup.

As someone observing events from outside Turkey, I have no insights to offer about the coup attempt itself and the specific internal dynamics of the country that led a group of desperados to take such a drastic, delusional and destructive step. What I can say without equivocation is that this coup, if successful, would have been a disaster for the people of Turkey and the Muslim world at large.

There has been much coverage in the international media of the significance of Turkey as a strategic partner in the war against terror as a valued NATO member and as a necessary bulwark against the spread of instability. No doubt there is truth in all these statements. But what was at stake on Friday night, for those outside Turkey, was something more than this.

The AK government - warts and all - represents the possibility of a country with a strong Muslim presence - historical and contemporary - conducting itself in a way that is at ease with its Islamic heritage. This is a government that does not see Islam as something to be ashamed of. At the same time, it represents an alternative to the template of Egyptian President Abdul-Fattah el Sissi and Saudi Arabia on one hand, and the Baathist and Takfirism of DAESH on the other. The AK government has created a space for experiments in the expression of Islamic identity.

It is this intersection between Islam and the popular will that Islamophobes find so unnerving, because it challenges their version of who they are. The antipathy to Erdoğan among the ranks of neo-cons and Western supremacists knows no bounds. It is the poison that continues to feed the Islamophobic delusions that Islamic countries cannot be confident, caring, cosmopolitan or democratic.

Even as the coup plotters are rounded up, as long as this narrative of Islamophobia and orientalism continues to be unchallenged, the achievements of the AK government will continue to appear precarious. This precariousness will not only affect the AK party, but all civilian forces as well, which is something that the leaderships of the other parties recognize by condemning the coup. The time is now for all sections of society to unite in turning their back on the logic of eurocentrism to build a new, inclusive feature for a new Turkey.

The opposition to the AK government must be conducted in terms of specific policies and strategies, and such disagreements are necessary for good governance and for a rich civil society. There must always be space for such disagreement to be voiced. There is, however, opposition that is not specific but existential, that rejects the very idea of the AK Party government because it rejects the articulation of Islam, democratic order and popular legitimacy, and it is this hostility that fueled the coup and continues to shape Western attitudes on Turkey.

Unlike in revolutions from above or below where the elements of the old order are removed, carrying out a major transformation of society without an act of foundational violence means that the elements of the old order may have to be accommodated. Thus, there remains in such situations a potential base for the restoration of the ancient regime. It is clear now that such a restoration can only come about through the abrogation of the electoral process. To prevent any possibility of a future restoration requires the electoral road to be enshrined across all sections of Turkish society.

Thirty-five years ago Spain's fledgling democracy was confronted with a failed coup attempt that sought to install a military dictatorship. The failure of this coup attempt in 1981 was pivotal in destroying the idea that there was a non-democratic solution to Spain's problems. The issues that motivated the coup plotters such as regional autonomy, terrorism and the emergence of new social classes continue to vex Spanish politics, but the narrative of a non-democratic shortcut to resolve these has been dissolved. The failure of the Spanish coup established the principle that the popular will can only be exercised through electoral representation and that only such popular will can be the source of political legitimacy.

The defeat of the coup attempt in Turkey in 2016 has asserted that it was the people and their elected representatives that are the custodians of Turkey's future. Electoral representation can no longer be considered as the preserve of a ruling party, as it is rather the patrimony of all the country's citizens.