Do black lives matter in America?: US politics and Dallas aftermath 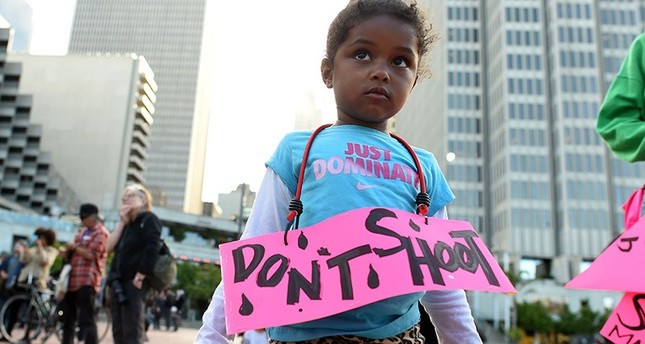 Nimani Darch-Walker, 3, wearing a sign that reads ,Don't Shoot,, looks on during a rally by the Black Lives Matter movement at Justin Herman Plaza in San Francisco, California on July 8, 2016. (AFP Photo)
by Mehmet Çelik Jul 28, 2016 12:00 am

In the aftermath of the recent racial tensions in the United States, the systemic discrimination against certain communities, namely black Americans, have once again become a highly discussed topic in the U.S. politics and media. The race discourse now varies from discussions on the validity of U.S. democracy to the questioning of the fascist undertones used during the presidential campaign. Do black lives matter and how will the U.S. policy makers and society tackle and solve the issue?

Alton Sterling, 37, was killed on July 5 in Baton Rouge, Louisiana, while Philando Castile, 32, was fatally shot on July 6 in Minnesota. The two black men were both killed by white police officers. Meanwhile, on July 7, a black man named Micah Xavier Johnson, who happened to be an ex-U.S. soldier, opened fire on people, with an army style automatic rifle, killing five Dallas Police Department officers and injuring nine others.

On July 8, U.S. President Barack Obama commented on the fatal shootings, saying that they were "not isolated incidents."

Obama, who was elected as the 44th and first African-American president of the U.S. nearly a decade ago on Nov. 4, 2008, said: "They are symptomatic of the broader challenges within our criminal justice system, the racial disparities that appear across the system year after year, and the resulting lack of trust that exists between law enforcement and too many of the communities they serve."

The president, who had used "Hope" as his main slogan during his election campaign, had made similar comments in the aftermath of Ferguson and Baltimore riots, calling the police brutality and violence against black communities as a "slow rolling crisis," which arise from the disparities in police treatment of black American citizens.

Now, and then, many Americans have taken their anger to the streets, protesting the systemic violence and discrimination by the white police officers against the black men and women, calling for an awakening in society, through the agency of the average citizen, saying "Black Lives Matter."

Obama's victory was not a simple election win for an American political leader. Rather, it was "hope," for many disadvantaged communities in the United States, from blacks to Latinos, from Muslims to women, and to other minorities, who had long suffered from the injustices of a discriminative system.

In a way, his message of hope was received by many Americans in disadvantaged communities as the message of the Civil Rights era. His election as the first black American president to the White House was, in a way, a symbolic reflection to Rosa Park's move on Dec. 1, 1955, when she refused to give up her seat to a white man on a bus in Montgomery, Alabama. Park's radical and brave move, combined with other Civil Rights period African American leaders, such as Martin Luther King, Jr. and Malcolm X, and many others, had also put a light of hope, freedom, and equality in people's hearts and made them use their agency to bring about change in American society against the racist institutions in place, through risking their lives. The heroic acts during the 1950s and 1960s had brought significant changes to the, then racially segregated, society from the legal, social and educational realms. Yet, despite the constitutional guarantees and even having a black president in the White House, the systemic discrimination against the African American communities have, to a large extent, continued to exist today. Moreover, the institutional acknowledgement, though it exists, has failed to install the necessary changes in the making of social policies to eliminate racial tendencies in the societies against the average black citizens, simply due to the color of their skin.

The last two incidents mentioned above were only two of the at least 127 black people who have been shot dead by police in the United States this year, half of last year's toll of 258, according to Washington Post data as of July 12. Meanwhile in 2015, 990 people were shot dead by the police, of whom 258 were black Americans.

Another statistic could also help display the disparities in the criminal justice system against black Americans. According to a report published by the Bureau Of Justice Statistics, in 2014, U.S. prisons held more than 1.5 million inmates in state and federal custody.

The official figures could perhaps be interpreted in a few ways: one being a racial interpretation, blaming the so-called "black violence," and the other being blacks being targeted as suspects more than others, in addition to the creation of ghettos or racially discriminative social, economic, and educational realms of the society, which leads to the rise of crime. The mass incarcerations against the blacks, mainly began through President Richard M. Nixon's "war on drugs" in 1971, though the statistics at the time showed declines in the numbers of incarceration. The years following the 1970s showed that the prisons were turning into "revolving doors" for many young black Americans. In fact, criminal justice, embedded with systematic racism, has further reinforced the criminalization of the black man, as incarceration does not solely mean a man behind bars. Rather, it means lack of future education, future unemployment, breaking up of families, and thus social dissolution of the black communities, in addition to limiting political agency of the man behind bars, which could perhaps bring about societal changes.

The domino effect of mass incarceration, thus, systematically puts the black communities in a disadvantageous position. Aside from the institutional racism, such criminalization also increases the social racial tendencies against the average black citizens, pushing them to be the marginalized within the whole. Such marginalization is, in fact, the creation of the "unwanted other," necessary to maintain the neoliberal social and economic classes, which help maintain the disparities between the poor and the rich, the 1 percent and the 99 percent. Similar arguments could also be made for the Latino and the Native American communities. While, the internal "other" is the blacks, Latinos, or the immigrant families, the U.S. has also used a similar strategy for its foreign policy making, creating the 'others' to achieve its goals internationally.

The report revealed that "From 2010 through 2012, the annual rate of homicide deaths among non-Hispanic white Americans was 2.5 per 100,000 persons, meaning that about one in every 40,000 white Americans is a homicide victim each year. By comparison, the rate of homicide deaths among non-Hispanic black Americans is 19.4 per 100,000 persons, or about 1 in 5,000 people per year."

Obama, who came to the White House with hope for many black Americans, is now enjoying his last days in office. Many things have changed in the near-decade of his term in office, yet the killing of black men by white police has continued to haunt U.S. society, in addition to President Obama's populist political rhetoric that, perhaps gives people hope, yet fails to bring about any necessary changes that would put an end to racial injustices in America.

He was a significant opportunity for U.S. democracy to revisit its values for all the people and bring up equality for minorities, through minimizing the white supremacy embedded in the system, both in its internal politics, and its foreign policy. Unfortunately, that did not happen, as statistics show that the elimination of racial injustices was "an area of opportunity" for his administration.

What is more, is that now a presidential candidate, Republican presumptive nominee Donald Trump, who is known for his racist, sexist, Islamophobic and xenophobic rhetoric, has emerged, and will be challenging the Democratic presumptive nominee Hillary Clinton. Clinton's election could trigger new hope for certain positive changes in social policies. However, in the case of a Trump election, a rise in racial tensions seems more likely, including social unrest and riots, in addition to more criminalization and killings of black Americans.

*Journalist at Daily Sabah, Istanbul based political analyst on Middle East and Europe