Gülenists behind the Kurdish issue 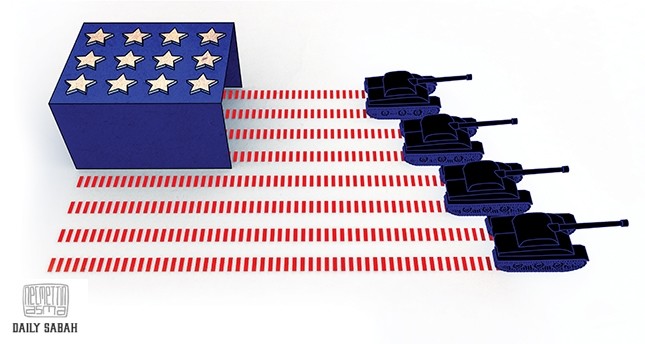 Illustration by Necmettin Asma - twitter.com/necmettinasma
by Emin Ekmen Aug 02, 2016 12:00 am

The Gülenist Terror Organization, which looks like a civil society organization to an outsider, had infiltrated every government agency, especially the intelligence apparatus, the judiciary and security forces

Turkey seems to have averted a crazy coup attempt that was destined to unleash a civil war.

It would be correct to say that segments of society that have been provoked against one another for years and were bound to become parties to a civil war in a possible conflict had the sense of becoming a real nation through this resistance. It should also be noted that the nation-state paradigm had failed to create this sense for 100 years in the country.

The masses gathered and felt united by the symbols of the state. That was an unprecedented situation for many attendees, particularly for Kurds. On the night of July 15, people poured into the streets with flags in mainly Kurdish-inhabited towns, including conflict zones like Cizre and Hakkari.

That resistance resulted in a new story that renders all the known theses about Turkish society and Turkey's sociology meaningless.

Almost all perpetrators of that wild terror were soldiers who had been raised on Fethullah Gülen's religious doctrine for 50 years.

The role of the religious doctrine in turning the members of the Gülen Movement, which has presented itself to the world as peaceful so far, into much worse terrorists than DAESH militants should be discussed and debated more.

One of the safeguards against religiously motivated organizations like DAESH and the Gülenist Terror Organization (FETÖ) seizing power is a non-discriminatory and reasonable understanding of secularism. President Recep Tayyip Erdoğan's call for secularism during his visit to Egypt is all the more important under these circumstances.

Cleaning of state institutions is necessary

It is already known well that the Gülen Movement, which looks like a civil society organization to an outsider, had infiltrated every government agency, especially the intelligence apparatus, the judiciary and security forces.

Long delayed for various reasons, purging FETÖ members from government agencies is inevitable this time. The enabler of a genuine and thorough purge is the people who stood against the coup attempt.

In line with the instructions given to them, FETÖ members made decisions that played with the nation's fault lines.

FETÖ's interventions into the Kurdish issue, which brought political consequences, were made through the police, intelligence apparatus and judiciary.

All those members of the police and judiciary who had been involved in incidents and investigation files listed in chronological order below were either suspended or arrested after the coup attempt for their actions or relations in connection with FETÖ.

- In 2009, the AK Party government announced a plan to persuade the PKK to lay down its arms. But the government's initiative was aborted due to mass political arrests conducted without the knowledge of the government that targeted the Democratic Society Party (DTP), the predecessor to today's pro-Kurdish Peoples' Democracy Party (HDP). Police footage of handcuffed mayors was served up through the official state Anadolu Agency at the time. Current HDP Co-Chair Selahattin Demirtaş said back then: "Arrest decisions are issued by pious judges close to the government." Years later, it was understood that these judges are FETÖ members.

- After the 2010 referendum, which is considered the most comprehensive constitutional amendment package in the Republican era, a crisis over "defense in the mother tongue" suddenly broke out in the ongoing trials of the Kurdistan Communities Union (KCK), the umbrella organization that includes the PKK. Requests by defendants to testifying in Kurdish, which had been granted in many previous trials, were rejected this time. Defendants' statements in Kurdish were referred to as "an unknown language" in case records. After politicians had been arrested and the Kurdish language had been ignored, theses arguing for the legitimacy of armed struggle instead of democratic politics were voiced again. All the judges who had unleashed that crisis are under detention now.

- The Ergenekon, Balyoz (Sledgehammer) and the military espionage trials, which had been founded on legitimate grounds but later turned into a purge and career planning within the military, were also tarnished by political motivations. No lawsuit was ever filed against the people who committed grave crimes in the southeast during the 1990s and were included into these investigations for these crimes. The feelings raised in Kurds by that double standard are obvious.

- In 2010, 34 villagers were killed by Air Force fighter jets while smuggling contraband from Iraq into Turkey near the village of Gülyazı in the Uludere district of Şırnak province. The commander who gave the order to bomb of villagers is currently under arrest for being a member of FETÖ and being involved in the failed coup. The effects of the trauma suffered by Kurds due to that bombing still linger. The file of an investigation into that incident launched by a civilian court was referred to a military court 550 days later upon a decision of rejection of the venue. And the military court, which is regarded as being fully composed of FETÖ members now, gave a verdict of non-prosecution and closed the file. FETÖ's media outlets, however, shamelessly used the whole event for anti-government propaganda.

FETÖ's first reaction to the AK Party taking the initiative to launch efforts to disarming the PKK was its attempt to arrest Hakan Fidan, the head of the National Intelligence Organization (MİT). Talks with the PKK in Oslo in 2011 were leaked by Gülenist media outlets. Thus, the FETÖ staged its first coup attempt with the Feb. 7, 2012 investigation that targeted Fidan.

When that operation failed, FETÖ focused mainly on poisoning the efforts to disarm the PKK as part of the reconciliation process that was launched in 2013.

Gülenist print and visual media had discussed the reconciliation process only from a negative perspective.

FETÖ-linked police officers and soldiers had virtually supported the PKK's efforts to establish field control in political, economic, social and military areas during this process through the intelligence and security vacuum they deliberately created.

As a consequence, along with Kurds who are unsympathetic to the PKK, Turks in the western parts of the country were also conditioned to oppose the process. After all, if the southeast was to be surrendered to the PKK, no one would accept such a peace process. And the PKK itself fully capitalized on the security vacuum.

The HDP's call for people to take to the streets on Oct. 6, 2014 to protest the siege of the northern Syrian Kurdish town of Kobani resulted in 56 deaths and looting over three days. Violence reached such a pitch that the PKK and the HDP had to condemn the incidents. These deaths and acts of vandalism occurred before the eyes of the police. FETÖ-linked police officers had either gone on leave immediately before the events or just watched passively. The goal was clear: To fuel the chaos and discredit politics.

The fight against terror over the last year

We have experienced the latest and most striking example of FETÖ hijacking civilian politics through security policies during the so-called trench wars.

When it comes to the fight against terrorism, open discussion is already difficult. The PKK resuming attacks, digging trenches, seizing control of neighborhoods, escalating the conflict through suicide bombers and bomb-laden vehicles have further suppressed dissident voices that raise objections to security-centered policies. Speaking out against these legitimate and just (!) counterterrorism methods was impossible in the media, let alone in the political arena.

Let's note that Nationalist Movement Party (MHP) Chairman Devlet Bahçeli has also drawn attention to efforts to create a suitable environment for a coup by increasing the number of military casualties.

The greatest evidence regarding efforts to pave the way for a coup through escalating terror and violence is the arrest of all command echelons of the 2nd Army.

However, what needed to be done in the region was clear and simple. The number of military casualties could be held to a minimum by implementing preventive measures with the utmost care and isolating trench areas.

Here is a last and funny anecdote to reveal FETÖ's record on the Kurdish issue. We remember with a bitter smile now that even traffic lights were banned during the 1990s due to the combination of yellow, green and red, the colors on the PKK insignia. A similar incident occurred at a Turkish Petroleum Corporation (TPAO) facility in Batman in recent years. We were startled when the yellow, red and turquoise-colored jumpsuits of TPAO workers were banned by some engineers and managers of the company on suspicion of making PKK propaganda. These engineers are now suspended from duty for their ties to FETÖ.