Relations with West after failed coup 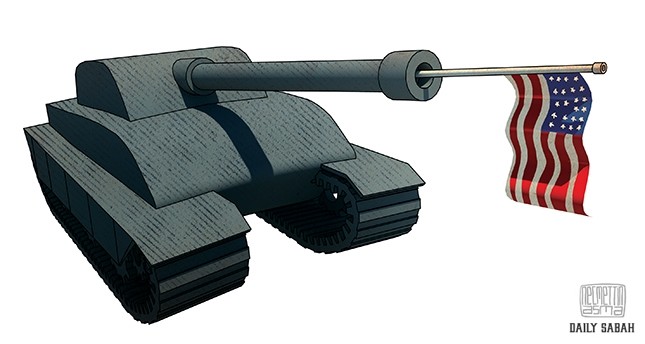 The only true path for the good of the world is to restore cooperation. There is no room for sentimentality, hatred or holding grudges in relations between countries. By foiling the coup attempt, Turkey has performed the duty of turning a new page on its own and without help from anyone

The coup attempt on July 15, orchestrated and led by the Gülenist Terror Organization (FETÖ), was crushed by a democratic and pluralistic popular resistance that is unprecedented in world history.

History is a subject of interest for me and I do not know another example of such a successful democratic, civilian resistance to a brutal and comprehensive terrorist plot against civilians backed by F-16s, tanks and helicopters.

Three helicopters carrying Special Forces commandos flew from İzmir to either capture or kill President Recep Tayyip Erdoğan, who has won 11 elections and has indisputable legitimacy, when he was on holiday in Marmaris. The soldiers raided Erdoğan's hotel room 15 minutes after he had left, killing two police officers in the ensuing clashes.

It is quite sad that we could not get the support we expected from the European Union, whose door we have been knocking on for half a century seeking full membership, from non-EU European countries and our other NATO ally, the U.S. The media, on the other hand, betrayed their collective bias almost in unison while reporting on the coup, signaling a kind of our-boys-are-doing-it euphoria and doing PR for putschists based on disinformation. It turned a blind eye to the resistance by millions of people that left nearly 400 civilians dead and thousands of civilians wounded, and some reports even tried to portray anti-coup protesters as coup supporters.

The BBC sought desperately for pro-coup opinion leaders, journalists and authors to take their opinions. The map of the flight track of Erdoğan's plane was shared by the media. MSNBC reported that Erdoğan requested asylum in Germany. None of these media outlets has apologized for their reports.

Bureaucratic domination and weak profiles of officials who are at the helm of EU institutions are cited as reasons for this situation. This is certainly a factor. But the real reason is that anti-Erdoğan sentiment, which arose in 2013, is taking over these circles. Of course there is a campaign lying behind this phobia and an understanding behind this campaign.

We have tried to explain in many platforms how mistaken this understanding is. Under the leadership of Erdoğan and his Justice and Development Party (AK Party), Turkey has been implementing various reforms without compromising principles of Western democracies, further strengthening its role as a bastion of stability in its region. All these reform processes are conducted by a legitimate political actor who received popular approval in 11 elections.

Since these processes are founded on the majority's will, democratization and economic growth proceeded side by side. In other words, as Turkey has become the 17th largest economy in the world and paid off its debt to the International Monetary Fund (IMF), its democracy has also become resilient and grown mature. But we failed to grasp before the night of July 15 how far that progress has gone.

The people of Turkey, from Turks to Kurds, from Sunnis to Shiites and Alevis and from Muslims to non-Muslims, have banded together and taken to the streets. City squares are still crowded. This is a festival of democracy. Theories about polarization have collapsed. The nation states that Erdoğan is not a leader only of the AK Party, but a peerless leader of the whole nation.

According to a recent poll, 79 percent of citizens find Erdoğan successful and 98 percent of the respondents believe the coup attempt was plotted by Fethullah Gülen. Indeed, significant evidence about Gülen's involvement emerged. The FETÖ-linked military officer who took Chief of General Staff Gen. Hulusi Akar hostage admitted that he asked Akar to talk with Gülen over the phone. There are hundreds of such undisputed confessions and pieces of evidence that have been collected. These are and will be presented to American officials.

But we have an important issue. Even though it is related with Gülen's extradition, in my opinion it is more important than that.

How will we repair our deteriorated relations with the U.S., EU and other European countries and restore the atmosphere of confidence. Would Turkey's goodwill alone be enough for this?

Just think, Parliament was bombed, attempts were made to kill the president and prime minister, putschists aimed to topple the country's elected president and government and F-16s and tanks attacked innocent civilians. I lost a lot of friends. On that fateful night, I found myself face to face with a heavily armed, 70-strong team of traitors at our party's Istanbul provincial headquarters building. Despite such dramatic scenes, we did not get the support or cooperation of our friends, but were met with their apathy instead. The first statements from American officials were rather offensive. Clear and unambiguous statements came only a few days later. There are reports that Turks trying to organize anti-coup solidarity rallies in Germany and Austria have been threatened with deportation and their efforts face many obstacles. Is this what we call European democracy? Or is racism on the rise in Europe because of this cynical approach to democracy?But what really disappoints me is our Western allies having lost their rationality in recent years when thinking about and treating Turkey. How could they fail to appreciate the uniqueness of a country that strictly adheres to democratic values and is an oasis of stability right beside the Middle East and Europe? How could they grant so much legitimacy both to the secret organization of a religious heretic like Gülen and to the PKK and its Syrian affiliate Democratic Union Party (PYD), which collaborate with him, and regard them as partners while ignoring elected and legitimate leaders and governments? How could they fail to see that such an approach would not bring any good to anyone?

Conquering a country from within through a murderous, fanatical and secret organization may have tempted some circles. The dream of taking over all decision-making mechanisms in Turkey instead of establishing mutually respectful, equal and negotiation-based cooperation on a win-win basis may also have led them astray.

But has no one realized that this is an Armageddon of sorts, and warned others? If Turkey drifts into a civil war and this center of stability collapses, Europe itself will turn into the Middle East, unleashing a third world war and causing all to lose. It should have certainly taken power intoxication, misleading analyses and an arrogant Western view of the Middle East to fail to foresee this.

By admitting 3 million Syrian refugees and foiling the bloodiest and cruelest coup attempt of the century without victimizing a single civilian and without even a single ATM machine getting looted, Turkey has become the country that represents Western values best in the 21st century.

Efforts to destabilize such a country constitute the greatest betrayal of liberal Western values.

The U.S. and EU should understand the importance of establishing a cooperation-based relationship instead of one of domination with Turkey. Turkey is not a banana republic. Nor will it be another Egypt or Syria. Relations must be quickly repaired and laid on a sound and a trust-based foundation. Turkey's axis has never shifted from the point of Western democratic values. On the contrary, it has obviously carried these values forward.

Besides that, political approaches based on disinformation, which disregarded all ethical values and were shown by the media, nongovernmental organizations and human rights organizations in the U.S., Britain and the EU during and after the coup attempt, must be duly analyzed. The blatant lies that Erdoğan tried to flee to Germany and that the coup was staged and supported by "good guys" are maladies that have infected these countries' conception of democracy through instrumental rationality that causes the greatest damage to their own democracies.

Of course, Turkey cannot behave as if nothing happened. Gülen's extradition will be an important step toward restoring relations and trust. But further steps are needed to develop a new concept and secure relations.

The only true path for the good of the world is to restore cooperation. There is no room for sentimentality, hatred or holding grudges in relations between countries. By foiling the coup attempt, Turkey has performed the duty of turning a new page on its own and without help from anyone.