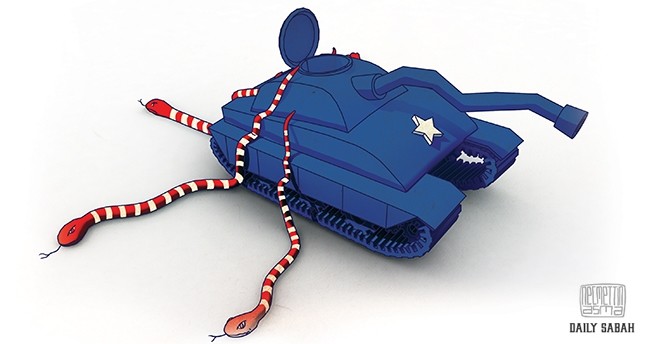 There is no direct evidence today of a U.S. role in the failed coup in Turkey, or in the successful one in Egypt. It may take decades to know the full truth about Washington's actual involvement in what happened in both countries

I'll start this article with an admission that a conspiracy of some sort is the usual explanation advanced for any catastrophe in the Middle East. You can't go to any country in the region without hearing theories about how the international community (by which is meant mostly the Western powers and Israel) are behind each tragedy, everywhere. The Turkish coup plot is no exception. It is very common to hear Turkish people, even some Turkish officials, pointing fingers and accusing the U.S. of being behind the attempted coup. There is no clear evidence of this, at least at the present time. And if Turkish intelligence and the government were not aware of the coup until it struck while in the heart of the country, one cannot entirely doubt Washington's claims that they had no advanced knowledge. On the other hand, one cannot say that accusations of American complicity in covert coups and regime change are totally odd or groundless.

As the saying goes, there is no smoke without fire, and the past history and current policies of the U.S. in the region have generated much smoke, so that you can find an excuse for many to see some fire. First off, let's remember that coup planning and execution isn't unusual business for the U.S. and the CIA. There are at least seven successful coups that were proven as sponsored by the U.S. during the last few decades, along with dozens of other direct and indirect regime changes across the globe, from Chile to Vietnam, for which the U.S. was responsible. A brief look at history can make some scratch their heads with thoughts, however odd, about some sort of U.S. involvement in the failed coup.

Yet this isn't the main reason for such thoughts. The most powerful fuel for these rumors is the safe refuge that the U.S. offers to the fugitive Turkish cleric Fethullah Gülen. To understand the impact this has on the Turkish people, just imagine what American people would feel towards any country that would host Abu Bakr al-Baghdadi. While Washington commentators portray the current crisis as a rivalry between the Turkish President Erdogan and Gülen, they omit that the ruling party as well as the opposition parties accuse Gülen of leading or inciting the coup, and they place the blood of those killed during the failed plot on his hands. The two largest opposition parties, the Republican People's Party (CHP) and the Nationalist Movement Party (MHP) both asked the U.S. to deport Gülen to Turkey to face trial. The attitude of the U.S. towards Islamists in general is negative - whether accusing the Muslim Brotherhood in Egypt of "stealing the revolution" despite winning five elections and being ousted by a military coup, or accusing resistance fighters in Syria of being terrorists for resisting a fascist regime. Despite this overall negative attitude, the U.S. continues to give the Turkish cleric a safe haven to destabilize an ally and NATO partner. And it seems that after the coup, Washington will continue to invoke legal excuses to avoid strong calls from Turkey to extradite Gülen. The perception that the U.S. shields Gülen, in effect enabling him, contributes to rising anti-Americanism in Turkey.

Another reason to excuse those who believe that the U.S. is behind the coup are American policies in the region. Just take Egypt as an example, where since day one, the U.S. has refused to call it by its real name, a full-blown military seizure of power from a democratically-elected government, calling it a "coup." Then Secretary of Defense Chuck Hagel was in direct contact with the junta leader, calling him more than 30 times, during, as well as after the coup. In contrast to statements saying that Hagel was trying to curb el-Sisi from using excessive power against the protesters, it seems that the line of communications extended beyond that. From audio leaked after the coup, el-Sisi said he received assurances from his counterparts in the U.S. that American aid will continue despite U.S. public stances, which is indeed what happened, and Cairo continued to receive most of its pre-coup aid despite the bloody crackdown. It didn't take much for the U.S. to finally fully endorse the regime in Cairo publically, and business continued as usual, despite the thousands killed and tens of thousands still suffering in el-Sisi's jails. Besides the Egyptian example, U.S. policies in the region have directly as well as indirectly endangered Turkish national security, from opposing the creation of a no-fly zone in Syria to protect civilians, to supplying and arming the Syrian off-shoot of the PKK terrorist group, which waged bloody terrorist attacks inside the Turkish cities, despite Turkey's repeated calls to stop such support. All this became fertile soil in Turkey for reasonable finger-pointing towards the U.S.

In contrast to the coldness that characterizes the relationship between U.S. administration officials and their counterparts in Turkey - in a now well-publicized profile on "Obama's Doctrine" in The Atlantic, Obama could not be bothered to hide his disdain for the Turkish president - the relationship between the U.S. and Turkish militaries is warm and friendly. While U.S. security officers had a valid point about the effect of the failed coup on the operations against DAESH, expressing those publicly and showing concerns about the Turkish officers involved in the coup supported those suspicions of a U.S. role in the attempted coup.

It is essential to state once again that there is no direct evidence today of a U.S. role in the failed coup in Turkey, or in the successful one in Egypt. It may take decades to know the full truth about Washington's actual involvement in what happened in both countries (or until some documents leak, as has happened with WikiLeaks). Until that time, U.S. past and current policies will be the basis for arguments either for or against such conspiracy theories.