It would be a dream for Putin to take Turkey completely into his fold. And probably a nightmare for the next US president 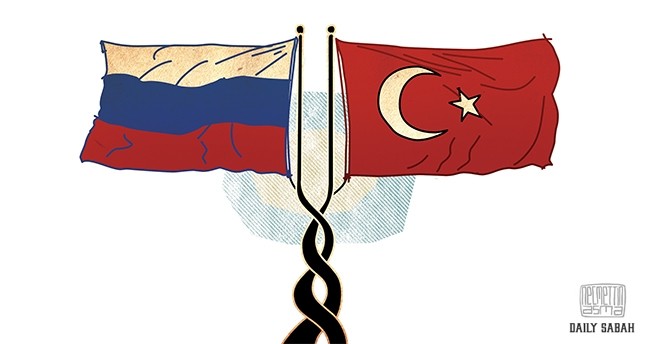 Illustration by Necmettin Asma - twitter.com/necmettinasma
by Martin Jay Aug 11, 2016 12:00 am

Are we witnessing the end of Atlanticism? And is Mr. Erdoğan the first of many leading this charge as we witness the demise of the EU and NATO?

Turkey was always considered an oddball member of NATO, not for the fact that it was a Muslim country but more the unfounded worry by the West that one day it might "go native" on Washington and leave the esteemed club and its members. But watching events unfolding in Turkey in recent weeks - and in particular the meeting between President Recep Tayyip Erdoğan and Russian President Vladimir Putin - few could blame the president for indulging himself in the notion of turning his back on his NATO membership and start looking for an entirely new deal with regional partners.

We are living through unprecedented times both in what is happening in the Middle East and the West. In the coming weeks, despite reports of rebel advances in Aleppo we may even see it in the hands of Syrian regime soldiers, setting the precipice for a peace deal in Syria, which has massive implications for Turkey, given that there is still some ambiguity over the relations between the Kurds in Syria and the regime itself. There is much to play for.

Yet ironically, the attempted coup in Turkey and U.S. President Barack Obama's reluctance to take the extradition request of the mastermind behind it seriously, will have far reaching effects in Syria. As unpalatable as it might seem, the protection of the coup's architect threatens to distance Turkey even more from Washington's sphere and with fewer ties and commitments to the American Dream, many in Erdoğan's administration will consider the options of moving much closer to Russia and the possibilities of a Putin-brokered deal in Syria.

Hard to believe? Given Syrian's Bashar Assad's support for PKK terrorists, many will argue that too much blood has been lost for that to happen and for new trust to eclipse old hatreds. But Turkey badly needs stability after the coup attempt and Mr. Erdoğan cannot afford to let the PKK capitalize on these dangerous times. He badly needs to nail the Kurdish threat.

A Syria peace deal could be the very thing that could do that, if guarantees from the Assad government - endorsed by Moscow - could ensure that keeping the Kurds in check in Syria can be achieved. Once again, the notion of a buffer zone within the Syrian territory on the border could come back on the table, but this time the Russians supporting it rather than the Americans poo-pooing it. Few remember how powerful Erdoğan is in the Syrian war as, with one command to the armed forces, he could completely seal the entire border with Syria - thus starving DAESH of food, medicine and vital equipment. Even those DAESH rats cannot survive without those goods. He could also stop the illegal oil trucks entering Turkey from Kurdistan, thus starving the terrorist group of oil dollars.

But then what? Where is the incentive to crush DAESH if all it does is glorifies Assad who many EU leaders are already talking with bilaterally anyway. Recently, while the Assad regime offered Raqqa residents safe corridors of passage but few took them due to previous stunts leading to men being separated and murdered, we are all reminded of the dire lack of trust on the Syrian battlefield; few players have an impressive track record of keeping their word.

But there is also now an even greater lack of confidence between those in the region and the West. Washington never really helped Turkey, as a NATO member, when it really needed it. And when it came, the İncirlik deal - to allow U.S. jets to use the base for anti DAESH sorties - didn't really offer much in the way of payback; in fact, DAESH finally targeted Turkey in a series of terrorist attacks, although quelling the western media's pontificating about Erdoğan helping DAESH, hardly made the deal worth anything. And God only knows what Hilary Clinton would do, if elected U.S. president with those 60 nuclear warheads that are supposedly hidden at the base.

The entire Turkey coup fiasco has finally put relations with Washington on ice. But it has also forced many to question the value of that relationship with NATO in the first place.

The same can be said of the EU, an organization now so weak that U.S. market traders on BBC Radio 4 recently said that the U.K. was a safer investment than the EU. But as the euro shakes and the project looks ever more precarious, some in Ankara will note the irony that the EU's so called foreign policy amounts to nothing more than meaningless waffle. In terms of foreign policy, the EU always follows Washington, especially on the Middle East. Brussels has been pathetically quiet about human rights and the threat of allowing a cleric in the U.S. some sort of immunity from prosecution for the attempted coup simply because he bribed the Clintons with cash donations. It's just one more reason why Trump appears to be the lesser of two evils in the Middle East as both candidates canter towards the final few furlongs in the U.S. presidential race.

At least now the Turks know who their friends are in Europe and the value of the so-called special relationship, which, two weeks before the U.K. referendum, appeared to be almost iconic. The EU's much-heralded foreign policy really is something that exists only in the minds of senior eurocrats whose wet dreams figure an Italian woman in uniform sending in armies to conflicts in the Middle East with blue armbands and yellow stars. But wait. News just in reveals that Federica Mogherini's dabbling in the Middle East Peace Process looks like it has made an impact! Just recently Israel's Prime Minister Bejamin Netanyahu called the ultimate bluff against the EU and went ahead with a plan for more illegal settlements. Previously, the huffing and puffing between Israel and Mogherini's office in Brussels amounted to sanctions against Israel on food labeling and threats of completely shutting down all EU-Israel relations. No, that was the threat from the Israelis against Mogherini, who these days appears to have a permanently flustered look on her face, rather like a puppy that has just been kicked by its new owner. Nothing seems to be working for the poor girl. Even a shocking fingers-down-the-throat work of extreme sycophancy in the form of an article in Politico even struggled to identify one single success of the former Italian foreign minister who's foothold into the top Brussels job was a stitch up between the political groups in the European parliament who wanted a socialist woman from a Mediterranean country.

The recent move by Netanyahu though must have been seen as just one more slap in the face for Mogherini. In fact, she will have to leave it to Ankara to toe in the Israelis over illegal settlements on Palestinian land, following a new chapter in Turkey-Israel relations just beginning. The world is changing. Globalization has broken down borders and is creating a near tariff free world economy, which has made ambassadors and, dare I say it, foreign correspondents almost entirely redundant. The EU though, in its naked lust to stay relevant is turning the clock back and dragging us all into a 1950s model, which only manages 0.5 percent growth at best and expects us all to respect a chief diplomat who was given a job through corruption and political favors. Both the EU and NATO are losing their raison d'etre as dynamic new democracies like Turkey expose them as being ineffectual at best and useless at worst. But who could blame Turkey for cranking up the relations with Russia, the Cold War adversary, when Putin has been dreaming of influencing Sunni Arab states in the region? Perhaps it's time to teach Washington and Brussels that there is a price to pay for turning your back on the Middle East