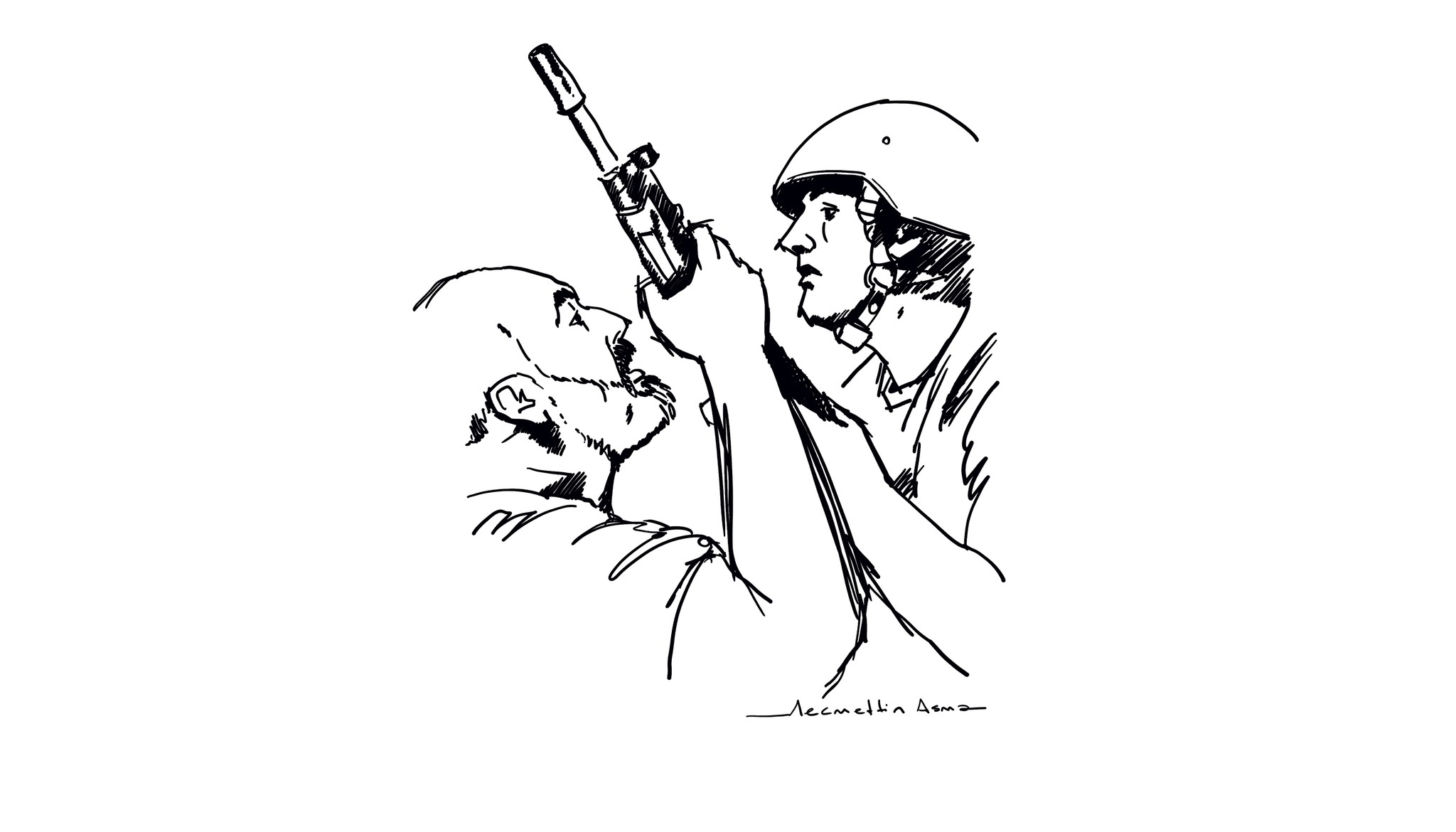 The concept of juntas is not a new in Turkey's military history, dating back to the late Ottoman period, but it reappeared in the deadliest way with the July 15 coup attempt

In Turkey's rich coup history, military interventions are portrayed under the heading of coups. However, the only attempt that was explicit, hierarchical and directly took administrative power was the Sept. 12, 1980 coup. The other coup attempts that resulted in the overthrow of the government were realized through a memorandum or triggering civil authorities by use of military force. The most common form of action that the military has used in order to seize political power is through a junta. This tradition is a political action modern Turkish politics inherited from the Ottomans. The first example of a junta was the Kuleli Case against Sultan Abdülmecid I as a result of an announcement of the edict of reform in 1859. It was applied by soldier, "ulema" andcivilian bureaucrats, but thanks to early intelligence, it could not be achieved. The second successful junta was under the leadership of Hüseyin Avni Pasha against Sultan Abdülaziz. As a result of the junta's attempts, his power threatened Sultan Abdülhamid II the most. After unsuccessful attempts, the second constitutional monarchy was declared on July 23, 1908. It was the first move of the Committee of Union and Progress (CUP) to dethrone the sultan. Abdülhamid II was forced to withdraw from the government within a year of the declaration. However, when the CUP declared July 23 a national holiday, the last period of the empire was ruled by the CUP military dictatorship. With the proclamation of the Republic, the military was taken to the edge of politics as a result of Mustafa Kemal Atatürk's central location. As a single party state, the military's interference in politics remained dysfunctional in conjunction with the transition of the military that fought the liberation struggle for politics. The owners of the political life were the soldiers educated at Ottoman military colleges and signed up for the foundation of the Republic. With the end of the one-party period in 1950, the military started to intervene in the political arena. Thereafter, the military's habit of intervention was concentrated and there was a spark inside the military. The May 27 junta, like the declaration of the second constitutional monarchy was celebrated as a feast of freedom and the constitution for a long time.

Not only in Turkish politics, but also previously in the Ottoman Empire, there have always been soldiers amid power struggles. The main element of this phenomenon lies behind the motto of "modernization is possible only through soldiers." Starting with Nizam-ı Cedid (New Order), and as a result of the abolishment of the janissaries, the Vaka-i Hayriye (Auspicious Incident), all led to the modernization of the military. Hence, the technology transfer starting with the concepts of development and progress was deployed to the Republic from the Ottoman Empire, triggering the phenomenon of Westernization. The military colleges and Kuleli Military High School, which were the sources of today's junta, have been the sources of this modernization movement. Retired Chef of General staff Gen. İlker Başbuğ said about the closure of the schools said: "Abdülhamid did not do this." Dense modernist ideology embedded in the tradition inherited from the Ottoman Empire is rooted in the heart of his criticism with this statement. Recent events show an interesting picture. President Recep Tayyip Erdoğan, who is a conservative politician and statesman, is shutting down an educational institution that is an Ottoman heirloom and, on the other hand, Başbuğ, who is a modernist soldier, advocates that these schools are the continuation of tradition and should not be closed. He gave Abdülhamid II as an example even though he is ideologically distant from him. The essence of the differentiation is that the matter is the housing of ideology, not a tradition. Military schools are not institutions where mere military expertise is taught, they are places where ideological doctrine is imparted. The structures in which authoritarian and materialistic thought have dominated have given birth to a classism that is engaged in a power struggle and acts as a managing authority. The doctrine of military schools has an elitist idea that looks down on selected power. According to soldiers, politics should be provided by them because they are above everything and naturally above democracy. The main reasoning behind of juntas and military coups is that elected politicians have strayed from the path and challenged in finding the truth.

These military structures have come down to the present day as the carrier of modernization within the continuity from the Ottoman Empire to the Republic of Turkey. Modern people and ideology started with this and spread across the country. However, the phenomenon of modernization has an inherent problem because of its ideological baggage of democratization. While Turkey modernizes, it has deprived basic rights and freedom that are fundamental for democratization. Micro identities of social structures are unable to win legitimacy in the public sphere, and an illegal structure emerged. Government agencies that are remote from the basic functioning of ideological bureaucracy have not been regarded as a field of activity, but as institutions that should be seized. Because bureaucratic institutions do not have a democratic, transparent or equitable structure, they become centers of ideology that must be seized. In terms of the construction of the state, it is necessary to construct civil service and the bureaucracy on the basis of merit without falling into the trap of nepotism.

After the July 15 coup attempt, the most basic analysis of Turkey is that the function of the state system is lost. During the coup attempt, the weapons that were imported with citizens' taxes were pointed at those very citizens. It is the military's intervention in their history that is the central subject of the crisis. After the coup was quelled, and as a result of the state of emergency, legislative decrees have revolutionarily changed military matters. At first, Gen. Başbuğ, many lawyers and soldiers objected to these changes because they are contrary to the law and decisions made in haste should not be included in the scope of the state of emergency. Firstly, it should be noted that many changes during the state of emergency are due to the coup attempt. These changes are also necessities of a democratic society in Turkey for civilian-military relations. The location and the function of the National Security Council in the context of EU negotiations since 2000, the functioning of military courts in the context of the 2010 constitutional amendment and finally the 2013 amendments that were the basis for the bumps in the law on internal service moved the system of a democratic society. However, since 2013, the dysfunctional legislative activities due to the latest developments that took place in Turkey and the election agenda disrupted the steps to be taken in the context of civilian-military relations. The Gülenist coup attempt was conducted by using the human resources from educational institutions such as GATA military medical academy, military high schools, military schools and military academies. This situation is what has primarily led the government to take the decision about military schools during the state of emergency. The gendarmerie intelligence agency escalated from the management of civilian administration to the degree of not sharing any information. The military chain of command was also disrupted and the military was being prepared for the junta. This all shows that the Turkish Armed Forces (TSK) did not have a wholesome system. Therefore, changes need to be made with consideration for a long time and rapidly. Legal regulations are both an answer to a coup attempt in one aspect and place civilian-military relations on a democratic plane in the big picture. Political power has hit two birds with one stone. They do not miss the opportunity and it succeeded in turning the situation into an opportunity. In summary, the system is experiencing extraordinary turbulence and the state of emergency was implemented to remove this situation.

Soldiers who are part of the Gülenist Terror Group (FETÖ) were the junta forces in the TSK. In contrast, it is currently unknown who supports this system and whether the different elements of opposition to the government have joined the FETÖ. The basic information is that the chain of command was not involved in the structure. It is known that major military commands opposed the coup. However, the movement should not be seen as something deviant and disconnected from the military mainstream. Otherwise, the issue would be reduced to a factional fight within the military. Statements from retired soldiers who have been victimized by the FETÖ's caliper method indicate a true cleaning of the military of FETÖ elements and returning the military to its factory setting, namely Kemalism. This dualism is no different than to see the death to Turkey as succumbing to malaria. In 21st century in Turkey, we must overcome the difficult position between two coups. This situation in the context of reform efforts, ongoing since 2000, should rapidly continue in the wake of the July 15 coup attempt. As a matter of priority, a decision must be made about the position of the chief of General Staff. In spite of all the deviations, ultimately, instead of being connecting an unauthorized president, connecting the post to an authorized prime minister would be meaningful. Secondly, the National Defense Ministry should cease to be the military logistics unit and should show real will to force commanders impersonating a civilian bureaucratic institution. Thirdly, the budgeting phase of military expenditures and expenditure items must be rationalized. This can be achieved with the employment of civilian experts in the field at the National Defense Ministry. The requested budget should be questioned as to the needs of the military units. Fourthly, it is necessary to abolish military courts and connect them the civilian judiciary. Finally, the realization of parliamentary and non-parliamentary control is important.

* Ph.D. candidate at the Department of Political Science at Yıldız Technical University