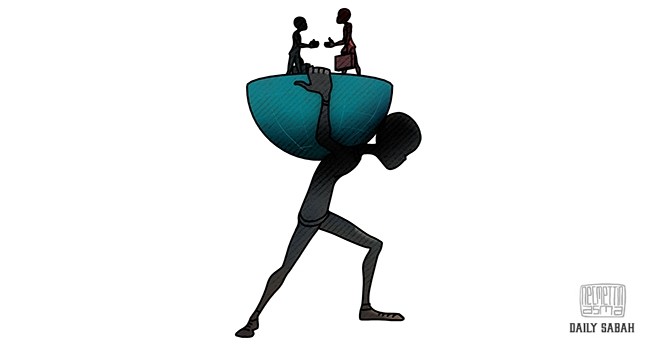 Illustration by Necmettin Asma - twitter.com/necmettinasma
by Mustafa Ergen Aug 24, 2016 12:00 am

As productivity increases, the number of people required to do the same amount of work is reduced, which frees human resources to do other jobs. Where will this end?

Academy-award winning film, "House of Sand and Fog", is adapted from the Andre Dubus novel about a former imperial Iranian army colonel, Massoud, who fled Iran after the 1979 Revolution with his family. It presents his life in California's Bay Area, where he works multiple menial jobs while living beyond his means and maintaining the appearance of a respectable businessman so as to avoid shaming his family.

While Massoud faces sudden indigence involuntarily, it is becoming commonplace as technological advancement displaces human labor. This frustration of job displacement started in the textile mills in the early 19th century England and the Ottoman world saw this following the adoption of the printing press by the Ottomans in the late 15th century.

The formula revolves around a combination of man and machine. As productivity increases, the number of people required to do the same amount of work is reduced, which frees human resources to do other jobs. Where will this end?

There is plenty of room for debate around start-ups and the high-tech industry. Productivity is increasing as well as population and we now have automation and artificial intelligence increasing productivity at ever faster rates. What sustains this development over the short-term is the creation of many different economic opportunities, where people can be entrepreneurs on a micro-scale. This would not be possible to sustain economically, if the last decade had not also seen growth in digital networking. Small enterprises can easily scale up to a large company. The downside, a failure to teach new skills to unemployed youth, will lead to civil instability, to which the only solution is a "safety-net salary" or "guaranteed income." A referendum on the world's first universal basic income was held in Switzerland last June, but the vote rejected a $2,555 guaranteed salary. We will see if public opinion will transition on this subject as well.

Politicians and policy makers over the past century have looked to capital markets to create jobs. Yet the supply and demand economy has seen a large number of jobs purged for the middle-income cohort, with people pushed down into lower-income jobs. This point has been largely discussed and literature is proliferating.

What we see emerging from digital network technologies is something similar to the purge of the middle class. Cloud technologies are purging middle-class segments, aggregating intelligence in the center and leaving dump end points along the job spectrum. In commercial banks we have started to see inexperienced clerks who used to carry out decision-making replaced by computers. Supermarkets will soon have a humanoid robot that will do the same work that a human used to do!

Discussions about job losses have so far centered on employees. How about employers? The purge of businessmen from the middle-class cohort is inevitable and this transition is an area we need to focus on. In the developing worlds, they have aggregated national wealth and that has to be used wisely to survive in the new economy. Their wealth is the fuel, while entrepreneurial monetary, fiscal and education policies are the wheels, and investment in data and digital infrastructure is the road. Who will drive the car? Entrepreneurs and investors, who have transitioned from the businessmen of the previous era. This is how we have to close the loop.

"The Kite Runner" is another Academy-award winning film, also adapted from a namesake novel. The main character Amir (Emir) has a father, referred to as Baba, who is a wealthy merchant in Afghanistan. Babaloves Amir, yet is often critical of him, considering him weak and lacking in courage. Amir finds a kinder fatherly figure in Baba's closest friend, who understands him and supports his interest in writing. In 1979, the Soviet Union militarily intervenes in Afghanistan. Amir and Baba escape to Peshawar in Pakistan, and then to Fremont in the Bay Area of California, where they settle in a run-down apartment. Baba fails his transition and begins to work as a gas station cashier, while Amir studies in San Jose University and invests in his talent, where he ended up as the author of this award-winning book. This relates to the chances of survival for employees and their transition to the new economy, indicating these as superior to that of today's employers.

How should we plan for this transition? Dwight D. Eisenhower, the 34th American president and supreme commander of Allied Forces in Europe during World War II, remarked regarding planning: "In preparing for battle, I have found that planning is essential, but plans are useless."

This paradoxical relationship between plan and chance offers a nutshell view of how we must transition from a hard-planning industrialist society to a talent-centric society. The plan is no plan but awarding initiative and abandoning the toxic aspect of human capital, as well as avoiding lifelessness. According to the World Economic Forum, 65 percent of kids today will work at jobs that have yet to be invented.

They will have to make it up as they go along.

* Associate professor in the College of Engineering, Koç University.