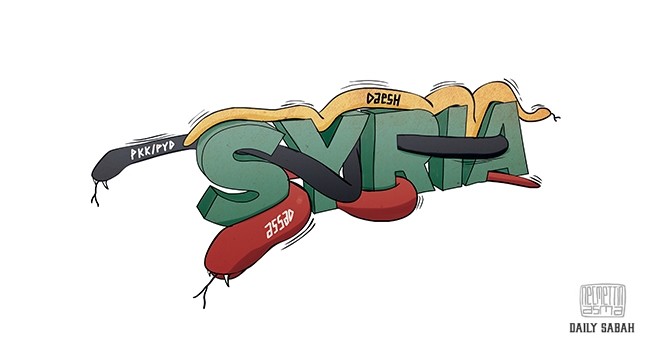 Illustration by Necmettin Asma - twitter.com/necmettinasma
by Merve Çalhan Sep 05, 2016 12:00 am

Since the Syrian civil war erupted, getting a grip of borders among sub-state actors is the main driving power of the shooting-war; therefore, the borders are amenable to Syrian unrest have been changing hands many times between opposition groups. One of the most prominent cities undergoing a constant change is Jarablus, situated to the west of the Euphrates River. This city holds a symbolic weight for almost each social actor actively fighting in Syria specifically the Democratic Union Party (PYD) and DAESH for several reasons. Jarablus is important for PYD forces because it is located between the Afrin and Azaz cantons combining the non-contiguous territory of Kurdish corridor between de facto Kurdish cantons. For DAESH, Jarablus is the only gate to open to Turkey as losing Jarablus cuts off DAESH militants' key lines of communication between the Turkish border and Raqqa, self-declared capital of DAESH. These are all known facts concerning Jarablus from the perspectives of active actors waging war in Syria but what is the main motivation behind Turkey's first major incursion into Syria and how will it transform the future of the region in terms of sociological and political dynamics surrounding Syria?

TURKEY NO LONGER HAS A RELIABLE ALLY IN THE REGION

Initially, the Syrian regime forces withdrew Jarablus in 2012 which is a kind of mutually beneficial tacit agreement made with the regime forces to focus on other turbulent locations rather than north. In the late 2012, al-Qaida affiliate Jabhat al-Nusra took control of the city; nevertheless, they handed over the city to DAESH in 2014 since the brutal branch of al-Qaida has sought full control of borders the regime abandoned. In some instances, the regime forces reportedly offered weapons to the PYD to repel opposition armed groups such as Free Syrian Army (FSA) and al-Nusra. On the slippery slope of the war which is subjected to a constant transformation of sub-state actors; one thing is for sure that PYD forces are engaging the regime in a rather reconciliatory manner that serves mutual interests. Apart from the concrete support of Syria government for the PKK's Syrian offshoot PYD; the U.S. is also allying with the PYD which causes U.S.-Turkey relations strained many times since the Syrian war began. To put it clearly, no longer having a reliable ally in the region, Turkey needs to secure its borders more than ever. Moreover, the U.S. is capable of reshuffling all the cards to manage all the actors acting in the battlefield and manipulating public opinion in the eyes of the international community.For instance, even though U.S. officials confirmed the utmost sensitivity of Turkish government toward the PYD; it has been reported that with the help of the U.S., DAESH militants had withdrawn from at least four villages located between Manbij and Jarablus in order to give ground to the PYD affiliated Syrian Democratic Forces before Turkish tanks entered into northern Syria. Given all the above-mentioned circumstances, it is a bare fact that U.S. foreign policy is based on an obvious opportunism in the Middle East manipulating all sub-state actors to exert its dominance in the region. While U.S. Defense Secretary Ash Carter is condemning Turkey to target Kurdish elements of Syrian opposition forces rather than DAESH militants; the U.S. is pursuing a cooperation with DAESH in order to enable the Syrian Democratic Forces (SDF) marching on Jarablus as part of a strategy to connect the self-declared region known as Rojava.

Furthermore, it has been reported that the sociological composition of the SDF was launched as an alliance of Kurds, Arabs, Assyrians, Turkmens and various ethnic groups; however the other side of the coin is quite a change: The reality is that taking a back seat in the PYD-affiliated Kurdish groups has a superiority and dominance in SDF. That's why Ankara is acting with suspicion toward the group. For instance, the U.S. declared that the forces moving on Manbij in April consist of Arab fighters, but the fact on the ground was completely different because most of the fighters have a direct link to the PYD and Arabs comprise a negligible part of the force. This is a rather sensitive issue while the PKK is vigorously pursuing a decades-long war against Turkey. Therefore, first and foremost reason for Turkey's marching toward Syria is directly related to regional security concerns of Turkey because the advancement of PYD forces in northern Syria jeopardizes Turkey's border security. Even the slightest presumption of grabbing full control of the Turkish-Syrian border by the PYD might turn out to live next door to a PKK-affiliated Kurdish statelet. Prior to the launch of the operation, there was a great risk of SDF forces proceeding to the western side of the Euphrates, which is declared as a red line for Turkey regarding any advances by either DAESH or the PYD, to reach the Azaz-Marea line. If this pessimistic scenario had come true, the PYD would have ensured control along the 500-kilometer-long stretch of the Turkish-Syrian border. According to the latest development regarding the operation it has been reported that Turkey-backed FSA forces have liberated 400 kilometers between Jarablus and Azaz; so that reached a depth of 24 kilometers from the Jarablus-Manbij line. Currently, the priority of FSA forces to advance through 70 kilometers west to Marea as a strategic location where rebels have a frontline with DAESH.

While the Turkish Armed Forces (TSK) are going ahead in northern Syria, foreign media starts a black propaganda simply spinning a yarn, the real target of Turkey in Jarablus is not DAESH but the Kurds. It is the latest salvo of international stakeholders acting in the Syrian civil war who are placing a premium on Kurdish guerrillas to fight against DAESH. The aim of the propaganda is to cover the latent fact that Syrian Kurds ensuring the security of the corridors in between de facto autonomous cantons widely known as Rojava. The second reason of Turkey's operation into Syria is rooted in sociological structure of the region as ethnic composition in northern Syria undermines any hope for an autonomous PKK region. According to the ethnic composition map, the north of Syria comprises of various ethnic groups such as Arabs, Turkmens, Circassians, Kurds and Druzes. Even though the PYD has vowed to form a new constitution draft including rights of all ethnic groups living in Rojava under a de facto federal system; the PYD was being charged with implementing policies of ethnic cleansing in Tal Abyad in 2015. Based on the statements of Turkmen residents living in Tal Abyad, People's Protection Units (YPG) forces used the pretense of a DAESH threat to drive Arabs and Turkmens out of their homes to reach their ultimate goal to establish an autonomous PKK region in northern Syria. Turkey also feels obliged to protect the rights of Turkmen citizens who were once remnants of Ottoman Empire.

POSSIBLE SHORT AND LONG TERM CONSEQUENCES OF THE JARABLUS OPERATION

Turkey's operation into Syria is very much based on legitimate reasons which will transform the future of the region in the short and long term. Short-term effects reflect on daily life routines of local residents in Jarablus. Reportedly, life has begun getting back into circulation for people in Jarablus after the FSA liberated the city. According to local news agencies, crafts and tradesmen such as grocers and bakers have come back to work. Fragments of everyday life from a wide range of perspectives gets in the routine in the city which means ongoing ambiguity rooted from high-stakes conflicts has started fading away. Turkey's firm actions to stabilize the war-torn country and guarantee its citizens' security at home and in neighboring countries will have positive effects in long term. Launching a joint operation by FSA members, Turkey confirmed once more having a powerful voice in the future of Syria. Aiming to drive out both DAESH and PYD from Jarablus and Manbij, Turkey also has once again proved its clear stance to stamp out all terrorist groups active both inside and outside Turkey's borders.