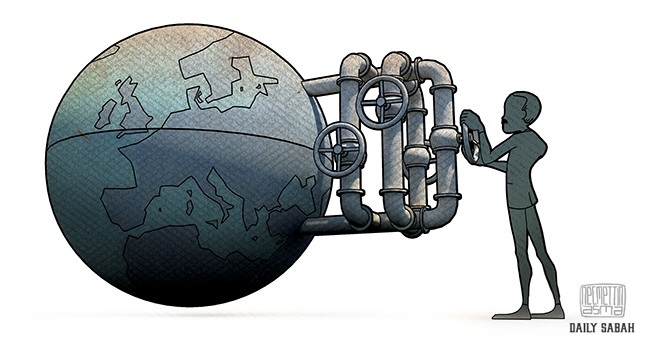 Illustration by Necmettin Asma - twitter.com/necmettinasma
by Maria Beat Sep 08, 2016 12:00 am

While the Turkish side can now use the Russian share of natural gas and find a new ally in place of the West, which ignored the deadly coup attempt on July 15, the Russian side finds a way to increase its revenues from its gas trade in the southern market

Let's call a spade a spade: Turkey is an energy dependent country while Russia is by far its largest natural gas supplier. Neighboring the gas- and oil-rich Iraq and Iran, Turkey itself is short of commercial deposits of natural gas and relies on imported gas almost totally.

Around 27 billion cubic meters of natural gas per year comes to Turkey from Russia. Russian deliveries experienced a sharp increase in 2011 reaching 26 bcm compared to 18 bcm in 2010. Two pipelines bring Russian natural gas to Turkey. They are the Blue Stream running across the Black Sea bottom and coming ashore in the vicinity of Samsun and the Transbalkan referred to as the Western Corridor that travels to Turkey through Ukraine, Moldova, Romania and Bulgaria. While the transit-free Blue Stream brings its gas directly to Turkey avoiding potential transit related bottlenecks, the Transbalkan pipeline continuously generates concerns about stability on its 10 bcm a year gas deliveries. The reason is the ongoing tension between Russia and Ukraine that has triggered the Russia-masterminded plan to fully stop the Ukrainian transit of natural gas to Europe by 2019 when the Russia-Ukraine transit agreement is due to expire. The closer the D-day, the higher the importance of constructing of a route safe from bottlenecks from Russia to Turkey to replace the Transbalkan pipeline.

A ROUTE SAFE FROM TRANSIT BOTTLENECKS

In 2015, about 40 percent of Russian gas came to Turkey by the Transbalkan pipeline, while the other 60 percent was pumped through the Blue Stream. Russian gas imports last year totaled 27 bcm and nearly half went to electricity generation.

Ambitious as it sounds, Russia's plans to find a solution to gas imports to Europe bypassing Ukraine could truly come to life if an alternative route is created. In this pursuit, several years ago Russia masterminded a construction of the South Stream pipeline to cross the Black Sea from Anapa in Russia to Varna in Bulgaria free from transit risks of passing through Ukraine when carrying 63 bcm of natural gas a year to the EU. Still, regardless of expectations enjoyed and efforts contributed, the project never took off due to Russia-EU disagreements and was shut down for good in autumn 2014. By that time, Russia's expense on aborted construction was already enormous: on pipelines alone it had spent about 2 billion euros.

The South Stream replacement didn't have to wait long to come and in the first days of December 2014 Turkey and Russia announced their plan to build a Black Sea submerged pipeline of a similar capacity of 63 bcm a year. Of them, 16 bcm of gas were to meet the Turkish market demand, while the other 47 bcm was to proceed to a mega gas storage unit at the Turkish-Greek border to supply the EU. The suggested four-line connector was to travel 900 km across the Black Sea bottom and have a land section of 180 km.

Called the Turkish Stream, the projected pipeline was met by the international community with surprise though seen as a promising development. Nevertheless, its negotiations almost immediately ran into difficulties and were put on stand-by in autumn 2015. After the Turkey-Russia jet crisis last November the project fell away, but instantly recovered when the country's leaders made peace in June.

Today Turkish-Russian are booming. Energy co-operation, as their backbone, is speedily gaining momentum and the Turkish Stream is back to the negotiating table as a top priority project. It may well be completed by the end of 2019, according to Russian Energy Minister Alexander Novak when interviewed at the G20 Summit in China. Following up on the August meeting between the presidents of Turkey and Russia in Saint Petersburg, the parties established a joint working group to prepare the Turkish Stream intergovernmental agreement to be signed this October.

The natural gas matters are of major importance for both Turkey and Russia. If Russian Gazprom and Ukrainian Naftogaz eventually fail to agree on an extension of their transit accords after 2019, Turkey will find itself short of 10 bcm of Russian gas per year currently pumped through the Transbalkan pipeline.

Six Turkish companies, namely Enerco Enerji, Avrasya Gaz, Bosphorus Gas, Shell Enerji, Bati Hatti and Kibar Enerji today use the Transbalkan capacity. Following up on the December 2014 agreement reached on the Turkish Stream construction, Gazprom granted them a 10 percent discount starting from Jan. 1, 2015, but arbitrarily took it back a year later amid the Turkish-Russian jet crisis. As a result, Russian gas deliveries through the Transbalkan pipeline sharply declined by around 50 percent in February 2016, though returned back to normal by April when the parties agreed on a new price discount.

No doubt, Turkey is a lucrative market for Russia in terms of gas sales. Between 2013 and 2015, Russia exported to Turkey roughly 27 bcm of gas per year to meet around 60 percent of Turkish demand. By gas import volume, Turkey is only second to Germany. This makes both countries dependent on each other in terms of supply and demand and eventually natural partners. It also creates solid ground for the construction of a mega pipeline like the Turkish Stream.

HOW MUCH RUSSIAN GAS DOES TURKEY NEED?

Not an EU member, Turkey is in a position to demonstrate better flexibility in energy matters that Russia never came to terms on with the EU in regard to the South Stream construction.

During the past decade the Turkish energy police has experienced an impressive change and as a result the diversification of energy sources became an achieved result. Turkey's natural gas imports were expanded by contracted deliveries from Azerbaijan and Iran in parallel with an increase in volume of Russian gas deliveries.

Iran is second after Russia as a natural gas importer today accounting for a 10 percent share of the Turkish market by pumping about 10 bcm a year in line with the 1996 contract agreement.

With sanctions removed, Iran is working to restore its position in the international oil and gas markets by raising their production levels. As such, it is likely to increase its market presence in Turkey as well.

From 2007, gas from Azerbaijan has been coming to Turkey by the South Caucasian Pipeline from Baku via Tbilisi to Erzurum. In 2015, construction of the Transatlantic pipeline system, TANAP was started from the Shah Deniz gas deposit in Azerbaijan through Georgia, Turkey, Greece and Albania to eventually deliver Azeri natural gas to southern Italy. After its completion by 2018, Turkey will be receiving annually some additional 6 bcm of gas, while around 10 bcm will be going to Europe. The pipeline system capacity is envisaged to be extended up to 30 bcm a year in the future. As a result, the Azeri share of the Turkish gas market will continue to increase and its market position will grow stronger, while the anticipated diversification of Turkish gas imports will receive an additional boost.

Still, the Russian share of the Turkish gas market will continue exceeding by far that of Azerbaijan and Iran, and it doesn't look to be meaningfully go down in the near future regardless of the coming construction of the Akkuyu nuclear power plant to meet 10 percent of Turkey's energy demand and local development of renewable energy sources. Natural gas will remain the prime energy carrier in Turkey for the foreseeable future making the Turkish Stream construction highly beneficial for the country's economic development.