The West always burying head in sand over coups and terror 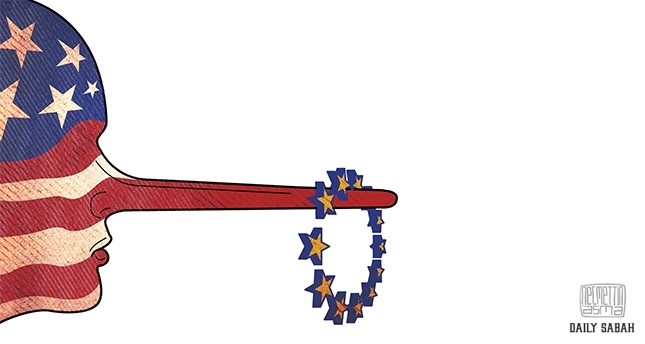 What the Western countries ought to do is be straightforward in their relations with others instead of being two-faced in practice, which contradicts what they defend and promote in theory

In theory, the West is known for its values, and the level of democracy many other states, including Turkey, wish to reach is called "the level of contemporary civilization" in Turkey. That being said, one could notice that the West (the EU and U.S.) easily becomes hypocritical when it comes to democracy in other regions, such as the Middle East. In this article, I would like to question how the hypocrisy of the West contradicts Western values that are being imposed on other countries by the West itself. This is because hypocrisy is a serious and dangerous phenomenon that needs to be challenged since it makes a person (a hypocrite) untrustworthy in the eyes of the people, as beautifully expressed by William Hazlitt: "The only vice that cannot be forgiven is hypocrisy. The repentance of a hypocrite is itself hypocrisy."

THE COUP D'ÉTAT IN EGYPT AND THE WEST'S REACTION

The notion that the West may be hypocritical can easily be observed in events happening in the Middle East, and there are a number of credible examples proving this judgment. For instance, when the Egyptian Army commanded by Abdel-Fattah el-Sissi staged a coup d'état against the democratically elected government led by President Mohamed Morsi in Egypt in 2013, the West's reaction to the coup was noteworthy. U.S. President Barack Obama, for example, said: "We believe that ultimately the future of Egypt can only be determined by the Egyptian people. Nevertheless, we are deeply concerned by the decision of the Egyptian armed forces to remove President Morsi and suspend the Egyptian constitution." Obama was hesitant to describe the Egyptian army's ouster of President Morsi as a "coup." European countries were also unsure how to react to the coup d'état staged by the Egyptian army against President Morsi. Although former British Prime Minister David Cameron said he condemned "military intervention" in democratic systems, he did nothing other than welcome el-Sissi when he came to London in 2015, something that was criticized by Jeremy Corbyn, leader of the Labour Party, who said el-Sissi's visit showed "contempt for human and democratic rights."

A similar reaction can be seen in the recent coup attempt in Turkey, which experienced one of the worst evenings in the history of the republic on the night of July 15 when the Gülenist Terror Group (FETÖ) attempted to stage a military coup. After a televised appeal by President Recep Tayyip Erdoğan, the people of Turkey took to the streets, marching bravely and dauntlessly against the putschists and their tanks. As a result, the attempt was unsuccessful, and Turkey was saved from rule by a dangerous terrorist group. However, it caused the death of 246 people and resulted in substantial damage to buildings bombed by the putschists, such as Parliament.

Even though Turkey suffered such a horrible night, the West's reaction to what happened in Turkey was not dissimilar to their response to the Egyptian army's removal of President Morsi. While the Gülenist junta was trying to stage a coup d'état, one of the very first statements came from U.S. Secretary of State John Kerry, who said, "I hope there will be stability, peace and continuity within Turkey." It is worth noting that he did not mention "democracy" in his statement. With the reaction to the coup in Egypt in mind, I read his statement as if he had said, "Even though the plotters staged a coup d'état, I urge them to keep stability, peace and continuity in Turkey." On that night, the West just waited instead of immediately acting and condemning the undemocratic attempt straightaway. Most of the European countries (with the exception of the U.K.) and the U.S. did not visit Turkey to show support and solidarity in the first few weeks after the coup attempt despite the serious consequences of the July 15 events. What they did instead was to criticize the post-coup purge that is dismissing members of FETÖ from state institutions. In short, they criticized the smoke, but ignored the explosion. It is very unfortunate that Obama has just realized the seriousness of the coup attempt, as he admitted to Fareed Zakaria in his CNN interview on Sept. 4: "The coup was very serious," and "You now have a reaction by the Turkish government that understandably is scared and concerned." Having said this, it is important to remember here, "the repentance of a hypocrite is itself hypocrisy."

Another example of the hypocrisy of the U.S. administration is their stance against terrorist groups in Turkey and Syria, namely the PKK and the Democratic Union Party (PYD). Even though the U.S. clearly and legally recognizes the PKK as a terrorist organization and even admits that the PYD is a Syrian affiliate of the PKK, they also say that they will continue to support the PYD by providing it with weapons to support it in its fight against DAESH. In this case, supporting a terrorist organization to get rid of another seems ironic, which also appears to be the main dilemma for the U.S. administration. However, it is not just the U.S. that has double standards in terrorism, but European countries too. For example, although the EU and U.K accept the PKK as a terrorist organization, these countries appear to offer a safe haven for PKK members and PYD members. The PYD is currently opening offices in the EU, and they can even organize public events near parliament buildings. Besides, many European countries still allow PKK propaganda in public places. For instance, PKK sympathizers occasionally organize protests, carrying the flags of the PKK and posters of Abdullah Öcalan in London and nothing happens. With this in mind, one Turkish guy's question to Richard Moore, the British Ambassador to Turkey, on Twitter is remarkable: "Will you allow me to protest if I carry the posters of Abu Bakar Al-Baghdadi (the leader of DAESH) in London?" This question appears to reflect the hypocrisy and double standard of the policies of Western countries.

WHAT ABOUT THE WESTERN MEDIA?

Western media outlets are no different than Western governments when it comes to hypocrisy. The Western media's portrayal of other countries, such as Turkey, usually includes distorted facts and wishful thinking, which go way beyond hypocrisy. For example, after the Gülenist coup attempt, the coverage in Western media outlets mainly focused on how President Erdoğan is acting like a dictator instead of emphasizing the seriousness of the coup attempt and its immensely negative consequences. This might make people think that the Gülenist coup attempt is something that might be justified because it was done against "a dictator," which was probably the purpose of this coverage. This reminds me of how the Western media justified the coup d'état in Egypt "implicitly" by deliberately reporting how President Morsi was acting in an undemocratic way before the coup, rather than reporting that what happened (the coup) was strictly unacceptable in any situation in democratic systems. After the Gülenist coup attempt was unsuccessful, the Western media then began to report on the post-coup purge in Turkey with a special emphasis on the argument of how Erdoğan is taking revenge on Gülenists by using the coup attempt as an excuse, without ever mentioning the seriousness of the coup attempt and what actually happened on the night of July 15. These examples show the level of hypocrisy in the Western media when it comes to democracy in other countries.

WHAT IS THE SOLUTION?

The main issue with the West's stance against democracy and human rights is that they normally promote and even impose these values on other countries; however, they tend to choose and prioritize power and their interests when it comes to the decision between international values and power/interests of their countries even though these are against the values they seem to try to disseminate. As a result, it appears that people in the East seem to be fed up with this mentality and the insincere policies of the West. What the Western countries ought to do is be straightforward in their relations with others instead of being two-faced in practice, which contradicts what they defend and promote in theory. Otherwise, what they say will not carry much weight with others. As noted by Tallha Abdulrazaq, "It is time for the West to realize that its long vaunted moral high ground has descended into a dark valley of immoral, deceitful hypocrisy that holds no weight in the Middle East anymore." To conclude, the West should actually make a decision based on what Rumi suggested: "Either seem as you are or be as you seem."