Can China say no to the war in Syria? 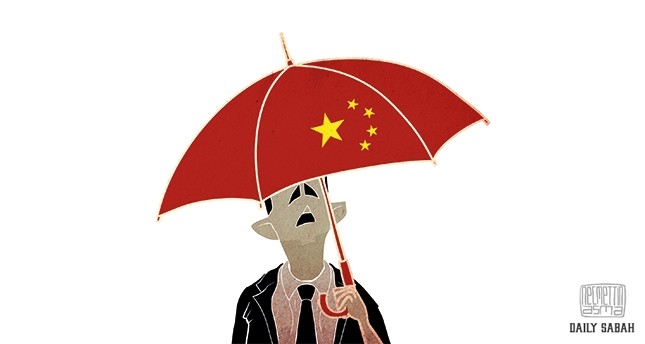 The title above could remind you of a nonfiction bestseller book that has been promoting nationalism vis-à-vis foreign powers' influences in the modern People's Republic of China. However; in this current piece, it questions China's recent move regarding the ongoing war in Syria where Beijing's leadership pledged to play a more active role. So far, China has been a passive bystander in the Syrian conflict, but it also sneakily supported the Assad regime in the international arena, particularly in the U.N. Security Council in which it is one of the five permanent members together with the U.S., the U.K., France and Russia.

When its official news agency Xinhua reported that the People's Liberation Army's envoy led by Rear Admiral Guan Youfei met with Syrian Defense Minister Lt. General Fahd Jassem al-Frejj in Damascus in mid-August, Beijing's support for the Baathist regime was clearly expressed to the world. The meeting resulted in China's promises of military and humanitarian aid to Syria as the parties also committed to fighting against terror groups on the ground. Therefore, China might be said to have abandoned its conventional wait and see strategy in the war-torn country, and shown its enthusiasm to go beyond a commercial pragmatism in Middle East affairs.

On the other hand, China's willingness to be involved directly in the Syrian war just came after Russia's increasing military presence in the region. Moscow's military intervention on behalf of the Assad regime since last year seems to have gained momentum as it enhanced political and security cooperation with regional pivotal states like Turkey and Iran. Beijing is also about to join in a regional security cooperation for which Syria would become a real litmus test for all parties in a geopolitical gamble. But the main question arising here is about the Chinese role and whether it may contribute to efforts to stop the bloodshed or further fuel the conflicts in Syria.

China's motives to engage in power politics in Syria

Unquestionably, Syria has become a battlefield for great powers' politics with the advent of Chinese military inclusion. The West, Russia and countries in the region have already positioned themselves in accordance with their interests and preferences in the conflict, which started during the so-called Arab Spring more than five years ago. Needless to say, all these factional politics between regional and international powers caused the war in Syria to become prolonged as it was combined with local dynamics of the war. Daish's advances on the ground together with Assad's tenacity in clinging to power against the will of the overwhelming majority of his people can be numbered among the domestic causes of the extension of the war in Syria.

Here is where China's intentions and handling of the crisis might be determinant for the future of Syria in particular and the region in general. As the Middle East is being reshaped in the wake of the wars in Iraq, Yemen and Syria, the People's Republic could not abstain from its geopolitical calculations in a region where it had deep economic and commercial ties. Besides that, China's new generation security challenges oblige Beijing to pursue a more proactive and preemptive foreign policy. In other words, Beijing's conformist foreign policy, known as the "peaceful co-existence" approach, seems not to work in the Middle East, which has increasingly become a source of instability and insecurity for China.

Therefore, one could say 21st century security challenges cause China to be preemptively involved in Syria as terrorist threats mainly coming from religious motivations started to undermine Beijing's authority particularly in Xinjiang. Located in the remote western areas of mainland China, the Xinjiang Autonomous Region is home to more than 10 million Uyghurs who are ethnically Turkic and religiously Muslim. Since the end of last century, the Uyghurs' separatist cause has become the most prominent issue regarding the territorial unity of the People's Republic, which was assertively set forward through the "One China policy" by the communist regime.

In this regard, radicalization of the Uyghur separatism under the flagship of the Turkestan Islamic Party (TIP) has further alarmed the Chinese government since the 2008 Summer Olympics in Beijing. Indeed, the TIP - previously known as the East Turkestan Islamic Movement - pledged its allegiance to al-Qaida in 2001 when U.S. forces invaded Afghanistan. Since then, the TIP resumed its main objectives to liberate Xinjiang from Beijing, for which the group has been collaborating with other regional radical and insurgent group, particularly located at the Fergana Valley, such as the Islamic Movement of Uzbekistan (IMU), Taliban, Hizb'ut Tahrir and very lately Khorasan. The Urumqi riot in July 2009 was a turning point in terms of the legitimization of radicalism by the TIP. The escalation of social discontent and unrest among Uyghurs easily turned into violence with the Han Chinese community in the region. Chinese security forces brutally suppressed Uyghur protesters and enhanced control over the area ever since the events took place in Xinjiang.

The radicalization process culminated with the TIP's declaration of loyalty to the militant (and/or terrorist) groups like Daesh and al Nusra Front in 2013 when its members widened their goals and participated in the so-called global jihad. The leader of the group, Abdul Haq al-Turkistani, has been promoting the idea of global jihad and encouraging his followers to go to conflict areas in the Middle East. The group's Arabic language propaganda journal "Islamic Turkestan" enabled the spreading of those ideas, whereas internet videos in which Turkistani himself appeared have also gone viral across the region. In a recent video released in late May this year, Turkistani denounced Daesh's claimed caliphate as "illegitimate" and "non-acceptable." He even condemned the IMU's activities in and around the Fergana region.

As of today, more than 2000 TIP fighters supposedly joined the war in Syria on behalf of militant (and/or terrorist) groups like Daish, Jaish al-Fatah and the al-Nusra Front which was recently renamed itself the Jabhat Fateh al-Sham. Even if the TIP has a confusion about its affiliation with the aforementioned groups, it nevertheless continues to believe in a worldwide caliphate in the international arena and to pose a separatist challenge against the Chinese state on a domestic level.

The TIP has increased its violent presence by using terror methods in and around China since the Urumqi riot. A recent car bomb attack targeted the Chinese embassy in Kyrgyzstan's capital Bishkek on Aug. 30; it killed no one, but it has shown the global dimensions of the threat posed by terrorism, militancy and insurgency against China itself. Although no group has claimed responsibility for the attack, Chinese officials did not hesitate to label it as an act of terrorism given the fact that the perpetrator was a Uyghur national with a fake Tajik passport. Chinese security authorities have been frequently securitizing the Uyghur issue in order to conceal human rights abuses in the region, where all criminal incidents were identified with the Uyghur community. The communist regime already felt insecure on its borderlands since the TIP has designated itself as the Central Asian branch of Daish. Now the Chinese leadership has properly understood that Uyghur separatism will continue to be radicalized by using violent methods, as far as Syria remains a hotbed of terrorism, a fact which in return has the potential to affect the People's Republic's national and homeland securities.

Alert for China: No pain no gain in Syria

China's entrance into the so-called Syrian quagmire in order protect its own security and geopolitical interests has several meanings for itself and the region as a whole. No doubt China alone is not able to eradicate terrorist threats and put an end to the internal conflicts in Syria. In this sense, Beijing should be very cautious in a region that is either unknown and distant to China, and the People's Liberation Army's capacity is naturally very limited in a hybrid and proxy warfare environment like the Middle East. Chinese authorities are also well aware the fact that Syria might be a convenient field to test and augment the red army's operational abilities before the country faces potential prospective security challenges in the Asia-Pacific region.

However, military cooperation with the Syrian regime signifies more troubles for China if Beijing's leadership is unable to contribute peacebuilding and conflict resolution efforts. Currently, China is not a belligerent in the war and it only pledged to give military and humanitarian aid to enforce the Syrian regime against any opposition group. Being positioned with any of the warring parties in Syria requires double-edged diplomacy with regional and international powers. Given its historical and political depth as well as the comparative advantages of its economy, China might perform such a diplomacy vis-à-vis other parties in the region. But the risk for Beijing would be the institutionalization of violence and terror in mainland China if the communist regime insists on keeping Assad in power.

From a Middle Eastern perspective, Assad's remaining in power seems not to contribute to a resolution at all, and all parties are now needed to compromise on a transitional government which could bring stability in Syria by the help of the international community. In this context, China should participate in peacebuilding and conflict resolution process as a rising world power, whereby it might counterbalance other great powers like Russia and the US in the Middle East. China's permanency in the region, where it has huge economic and commercial interests, gradually becomes very dependent on its role and contribution in the way of solutions to the Syrian civil war. Syria is the western end of the ancient Silk Route on the coast of the Levant, and the basin is of utmost important for China's long anticipated "one belt, one road" initiatives proposed by the incumbent President Xi Jinping.

Some critics indicate that Beijing was trying to change the agenda from issues surrounding the South China Sea to Syria. In doing so, the People's Republic can diminish Western criticism and pressure through participating in fighting with terror, as Russia used the same method when it became involved in Syria in order to alleviate Western rage and criticism regarding the Ukrainian crisis. However, Syria has already shown that pursuing diplomacy is very rocky, and has a boomerang effect inside which might hit back both China and Russia. Like Beijing, Moscow has also been very concerned with the militant flow from its autonomous mainly Muslim-populated North Caucasus oblasts to Syria and vice versa. So Russia is also facing the same risk if the Kremlin makes fatal mistakes in terms of policy making and conflict management in Syria. In brief, Syria's fragile warfare conditions promise little for China unless the status quo is unchanged for the sake of the predictable future of the war in Syria.