Donald Trump is back. And he has no masterplan for Syria. Here's why that's a good thing 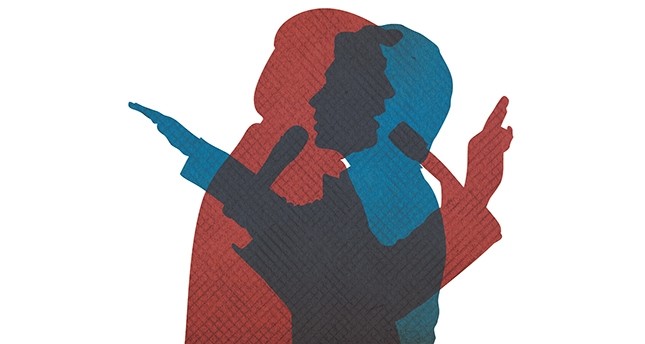 Illustration by Necmettin Asma - twitter.com/necmettinasma
by Martin Jay Oct 12, 2016 12:00 am

Clinton's cheap trickery backfired and Trump has bounced back. The campaign has lost sight of policy though and focused on personalities, sex and media skullduggery. And that's just the good news

It was perhaps the worst words that President Recep Tayyip Erdoğan could have ever wished to have heard from Hillary Clinton in the latest TV debate with Donald Trump: "I would also consider arming the Kurds [Kurdish militants]. The Kurds have been our best partners in Syria, as well as Iraq." With such an incendiary statement, it seems then that Clinton would make Turkey - a NATO member - a foe of Washington and place the Kurdish militants, not Daish , as their principle enemy of Turkey, a scenario which Western media accuses Ankara of daily, but one which will be in place for real if Mrs. Clinton wins her presidential bid.

But the debate has turned the tables and although leading up to it, Trump looked like he was on his back feet, now it appears that they are both neck and neck in the race. Clinton gambled with cheap tricks and it backfired on her and her campaign.

Both candidates have a different perspective and view of the Middle East's woes - in particular Syria - with Trump more focused on destroying Daish but working with Russia to do it; Clinton's vision on Daish though is more strategic and geopolitical. She is, after all, the only official in Washington who still talks of regime change when it comes to the Syrian leader Bashar Assad. But her focus is more about hitting Daish and the Russians at the same time, with a longer view of removing Assad. She has made it clear - and hinted in the debate - that she will support the Saudis much more in the region in that conflict and has no problem with isolating Iran. It is a bolder, higher risk strategy which perhaps the neo cons that surrounded George W might have conjured up if given the chance, but one which should worry Turkey, Iran and Hezbollah in Lebanon. She believes in U.S. special forces playing more of a role in Syria advising other "groups." Yet are these groups to be the so-called moderate Sunni fighters who apparently can be segregated from Daish and al-Nusra? Or does her strategy involve encouraging Arab countries to send their regular armies there, led probably by Saudi Arabia? Both of these are possibilities.

But Hillary's plans are certainly based heavily on backing the Kurdish militants more, as presently there are 300 U.S. soldiers training them in Syria but so far, we are led to believe, not giving them arms or money.

Providing them with arms for the first time could bring tensions with Turkey to an all time high point given that it is locked in a legal battle with Washington over the U.S. residency of Gülenist Terror Group (FETÖ) leader Fetullah Gülen, a Turkish self-exiled cleric who is the mastermind behind an attempted coup this summer, which the country is still reeling from.

If it's Hillary's only real plan, then the Middle East is in real trouble though. Probably the last thing Syria and the surrounding countries that are paying a high price for the Syria war needs, is a Kurdish state. It is more about the price it would cost. What has to be lost for it to be carved out of the mess of a war which has cost hundreds of thousands of lives, pitted neighbors in the region against one and other and really does not need a new military dimension. Clinton's ideas which she bandies about sound like a blueprint for a world war at times as she has made it very clear that she is prepared to take on Russia if she has to.

It is lunacy and one which should worry Americans and Turks. If she has thought though about such a scenario, we need to be worried. It means she has discussed it with friends at the Pentagon and sketched out a plan of action with Russia - all to boost her own ego and establish herself as an American presidential candidate who is prepared for war with its greatest Cold War enemy, regardless of the cost.

Trump has no real plans in Syria, to be fair. It was plain to see in the TV debate as he simply talks tough on smashing Daish and would almost certainly work more closely with Russia on achieving that and would happily sign up to Assad staying in power as part of a pact. Middle East nerds even spotted his ignorance of Daish, in claiming that the group had taken much of the oil from Libya, which is not at all true.

But his ignorance of this part of the world is a blessing, whereas Clinton's postcard, blinkered view is a curse by your worst enemies. She has old scores to settle in the region and to prove herself. She needs to be seen to stand up against Putin and is still harping on about regime change in Syria, a subject so old hat that even Assad's staunches enemies do not bother to wrangle with it, as it is an erroneous a notion as it is anachronistic. But Clinton is like the oldest teenager in town. She just can't help herself stuck in the old grooves.

Even the Europeans are now cooling down over "regime change" in Syria and so see this is a policy of some merit as a peaceful Syria with Assad is better than turmoil without him.

Turkey should also note that it might get Gülen extradited back to Turkey under Trump as president as Clinton, who according to Trump's campaign received $250 million from "Muslim leaders" (whatever that means), is unlikely to allow the cleric to be sent to Ankara to face the music. I am told that Gülen contributed also to the Clinton Foundation and during Bill Clinton's time in office helped the FBI and CIA as an adviser, so being ratted by the Clintons is about as likely.In fact, she may well be planning on using Gülen to advise her on the how to play the Kurdish militants and the Erdoğan administration against one another. Anything is possible from a crackpot like Hillary who actually believes the Americans can do a re-run of the Afghanistan war in Syria and win. Hillary is no Charlie Wilson. And the times have changed.

Even in the 1980s when Wilson called one of his attractive interns "jail bait" and hopped into bed with anything with shaved legs, it was still not cool to sexually assault women. And this presidential campaign has set a new threshold in that it confirms two things: It's okay to rape women if you are white and a democrat.

Incredulous in so many ways, but America is wrestling with its own consciousness when it has to decide between a chauvinist businessman whose selling point is his buffoonery and blatant lack of any hidden agenda, verses a ruthlessly ambitious career politician who can cover up her husband's string of rape allegations just to get to the Oval Office and whose only apparent skill seems to be able to habitually lie, even to the cameras. Whereas Hillary cannot stop lying and covering up, Trump seems like an amateur in comparison and is blinded by the headlamps of the media which serenaded his dirty talk tape almost like a trophy which betrothed his guilt as a bragging alpha male. But her dirty laundry - Benghazi, deleted emails, corruption allegations, Bill's serial raping, seems to have been trivialized and processed by corrupt American media who amazingly (like the Washington Post) announce that they are "closing" the subject of her emails. No wonder Trump has a chip on his subject about media when most seem to have an agenda to dispatch Hillary's baggage under the stairs, while his own foibles are made into movie epics. Anderson Cooper could barely hide his endearing reverence to Clinton. But again U.S. media and how corrupt their corporations are, remain part of the problem. Cooper, I was told by a State Department producer at CNN "made up all his foreign reports" and so probably cannot be trusted to play fairly as an adjudicator. But no matter. It might just be that, like with Brexit in the U.K., the American public will have such little faith in their own media that the somewhat unrefined but lucid persona of Trump will prevail. God help us all in the Middle East if it does not.

* Freelance journalist based in Beirut who works for a number of British titles as well as Deutsche Welle TV
Last Update: Oct 14, 2016 12:21 am
RELATED TOPICS