Turkey won't wait in Mosul 'until the chips are down' 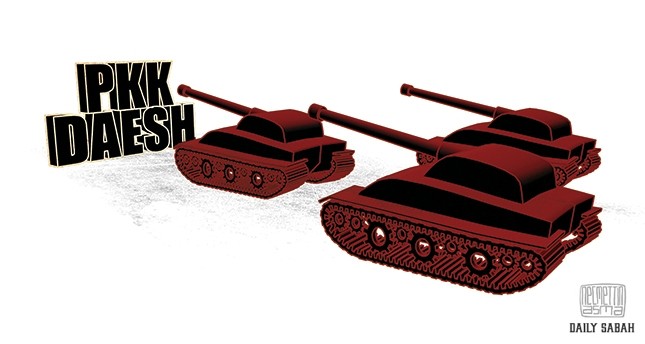 Illustration by Necmettin Asma - twitter.com/necmettinasma
by Markar Esayan Oct 24, 2016 12:00 am

How can you expect Turkey to be indifferent to such serious developments just across its borders while countries from thousands of miles away, which regard developments in Syria and Iraq as threats to their security and national interests, appear there?

Turkey has defended the same view since the Syrian civil war broke out and Daesh's bid to create a state in the Levant with Iraq at its center and extending to the Mediterranean coast became apparent. Accordingly, a solution to the civil wars in Syria and Iraq and problems like Daesh would be possible only by establishing a functioning state system in these countries. Such a system could not be created with dictators like Saddam Hussein and Bashar Assad at the helm, who oppress their own people and carry out massacres. But it is impossible for them to achieve this on their own considering the fragmented structure of these nations, their long-suffering people on the brink of sectarian conflicts and their collapsed economies. First of all, conflicts should be stopped, demographic changes should be prevented, and externally displaced people should be allowed to return to their country so that peoples of these countries can agree on a system of government suited to their demands.

In fact, Turkey's proposal should sound familiar to the U.S., the de facto leader of the U.N. and coalition forces because the U.S. performed this duty for the shattered Western Europe after World War II via the Truman Doctrine and Marshall Fund. Approximately $200 billion (in today's dollars) were transferred by the U.S. to Europe. While Federal Germany was demilitarized, its economy was lifted out of ruin. Britain and other countries in Western Europe were given similar support. Obviously, if it hadn't been for U.S. support, Europe would have probably failed to recover, and even worse, European nations might have gone to war with each other again, and the Red Army might have seized the whole continent. Indeed, that was the primary motivation that compelled the U.S. to that huge sacrifice. Perhaps another motivation was the shared Anglo-Saxon heritage.

As North Korea's invasion of the south was interpreted as a sign of the impending occupation of Europe by Stalin, NATO was established. The number of U.S. divisions rose to 52 and new military bases were set up, etc. That's the point where the story took a dramatic turn, as the U.S. was forced to become a superpower due to Cold War threats. Actually, toward the end of World War II, the U.S. intended to return to its own soil as soon as possible. However, Stalin forced the U.S. to become an imperial power.

Well then, wasn't it evident that countries like Syria and Iraq lacked the capacity to establish democratic order and peace through their own means? Doesn't the U.N.'s principle of the Responsibility to Protect (R2P) entail a responsibility to protect and assist these countries? It certainly does on paper. But the U.S. did not assume this responsibility. Russia, on the other hand, has followed the same strategy that the U.S. pursued following World War II in the wake of Assad's chemical attack on Eastern Ghouta and trampling of Obama's red line. And it has used this war both to become a superpower via Syria and to respond to the move in Ukraine.

That feeble stance on Syria and Iraq has been complicated by the fact that a new world order has not been established since the Cold War ended and the bipolar world became a multipolar one. U.S. failure to take the correct position despite its growing power brought about seriously damaging effects. Additionally, support given to the bloody overthrow of Egypt's elected president Morsi by General al-Sisi, which further provided ammunition to groups like Daesh, was a grave mistake. Dealing with groups like the PKK and the Gülenist Terror Group (FETÖ), with the same logic, under the pretense of their "secular" character has also raised the possibility of the U.S. embittering and even losing Turkey. It's in this context that the Free Syrian Army (FSA), backed by the Turkish Armed Forces (TSK), captured Dabiq, which has symbolic importance for Daesh, the PKK/Democratic Union Party (PYD) corridor was thwarted through the Euphrates Shield Operation and the Mosul operation began.

Turkey closely follows the Mosul Operation, which officially started Oct. 17, just as it watches what's going on in Syria. Perhaps what its western friends don't understand or disregard is that Turkey sees, quite rightfully, the developments taking place across these two borders as an issue of internal security. After all, how could it be otherwise? How can you expect Turkey to be indifferent to such serious developments just across its borders while countries from thousands of miles away, which regard developments in Syria and Iraq as threats to their security and national interests, appear there? Turkey is directly targeted by the PKK and Daesh via Syria and Iraq. It hosts more than 3 million refugees, having spent over $20 billion on them so far. Nor is this all. These groups conduct heavy attacks in Turkey, as no other Western country faces. Turkey loses hundreds of its citizens as a result of Daesh and PKK attacks.

In addition, Turkey is rightfully trying to prevent a sectarian conflict that can last for decades due to a possible mistake or deliberate intervention in the Mosul Operation spreading to Turkey as well. Meanwhile, it categorically rejects demographic changes and the creation of corridors and satellite states in Syria and Iraq by terrorist organizations.

Recent signals from the U.S. concerning Turkey's joining the air operation and an agreement on not allowing Shiite forces and the PKK to enter the center of Sunni-majority Mosul are positive developments. Unfortunately, however, the U.S. has not kept or couldn't keep promises it had made to Turkey as in the case of Syria's Manbij. Hence, Turkey is determined to keep a close watch on Mosul and stepping in without, as in the words of President Recep Tayyip Erdoğan, waiting "until the chips are down."

Turkey does not have an eye on another country's soil. Both President Erdoğan and Prime Minister Binali Yıldırım reiterate this on every occasion. All of Turkey's concerns are legitimate and deserve support.

Here is a list of Turkey's concerns or expectations regarding the Mosul Operation:

2) Turkey's exclusion from the operation and negotiation table

3) Continuing insistence on Bashiqa military base

5) Opening a corridor to Daesh from Mosul to Syria, particularly in such a way as to lead to a confrontation with the TSK and the FSA in al-Bab, and giving way to it

That's what made President Erdoğan say, "Turkey has plan B and C," and it is quite obvious. Turkey has no hidden agenda. It seems that a Tigris Shield Operation is inevitable in the event of a single one of these risks materializing in accordance with the rights conferred to sovereign states by international law.

Actually, Turkey's reservations should be shared by the U.S., too. Can it bring any good to the world to use terrorist organizations and exploit sectarian fault lines in the region?

We believe it cannot.

We hope that a human-oriented understanding of realpolitik based on universal values flourishes in the region in the name of peace in the region and the world. The presence of a democratic, secular and Western country in the region - i.e., Turkey - provides the most consistent ally to the EU and U.S., including Israel. We think that alienating this ally and ignoring its vital concerns, which is unethical, also conflicts with common interests. The need for a new world order is evident. It should be clear by now that this new order cannot be a poor copy of the Cold War. It's a fact that there are certain people who think national interests and security concerns can be looked after through color revolutions, sectarian fault lines and, particularly, through proxy wars fought by groups. But reason has to step in. And it should be proven through practices in Mosul today, not tomorrow. This would help mend strained and damaged relations as well, especially after the failed coup attempt of July 15.
RELATED TOPICS