Can Turkey, Pakistan and Saudi Arabia form a security alliance? 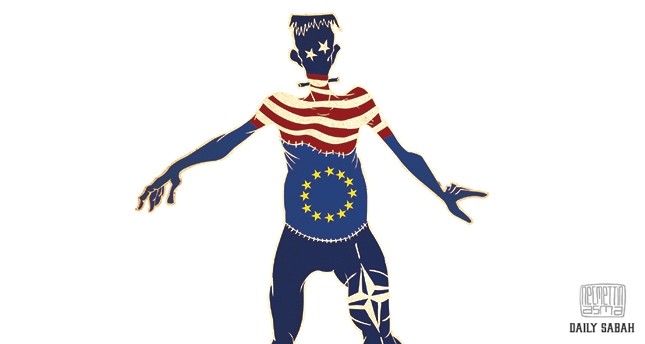 Illustration by Necmettin Asma
by Mohammad Pervez Bilgrami Oct 28, 2016 12:00 am

Alliance between Turkey, Saudi Arabia and Pakistan can gradually reduce the meddling of outside powers and guide the region toward durable peace and lasting stability

With its long history of managing the affairs of a transcontinental empire, Turkey would ideally prefer to handle regional affairs with a regionally-crafted security alliance, without any meddling from Western hegemonic powers.

The failed coup attempt in mid-July has once again put the planners in Turkey to rethink the trajectory for the country's future course of action because of various terrorism and security threats posed not only by openly hostile forces but also by so-called allies in Europe and within NATO.

NEITHER AMERICANS NOR RUSSIANS

Turkey has to make the decision as to whether to carry on with its alliance with the dangerously unpredictable, foolish and dishonest United States and its international enterprises such as NATO and the EU or perhaps align with the Russians and Chinese bloc. Turkey's third alternative can be a regional security alliance with countries like Pakistan and Saudi Arabia.

Apart from the issues surrounding the recent coup attempt and the direct and indirect role of the U.S. in it, Turks were already frustrated with the various U.S. schemes in Eurasia in the last few years. The U.S. and its stooges are working against Turkey's interests. The failed coup attempt has indeed alerted the Turkish policy makers and people to American duplicity and hostile plots. U.S. policies in Syria, Iraq, Egypt, Libya, Caucasus and the Balkans are designed to harm Turkey's interests. Keeping this whole picture in mind, one can foresee that Turkey's relations with the U.S. will not remain as they used to be.

It is also quite unlikely that in the long run Turkey's rapprochement with Russia will be a game-changer in the regional geopolitics. It is important to note that Russians also prefer brutal dictators over democratically-elected governments in Islamic countries. Russia's unwavering support to Syrian dictator Basher Assad and Russian President Vladimir Putin's strong backing to Egypt's coup leader Abdel Fattah el-Sissi are well known. Therefore, Turkey cannot remain dependent on the U.S. or Russia to pursue its regional policies. Turkey needs to establish a far-sighted military alliance of regional powers.

In the present situation, Egypt, run by an atrocious junta regime, cannot be considered a feasible partner for such an alliance. Iran is trying to create a greater Persian Empire and is in direct confrontation with the Sunni Muslims in the region. The rulers in Tehran have repeatedly shown that they have no principles but only a sectarian agenda.

Suffice it to say that Saudi Arabia has been a major component of the counterrevolution bloc in the Arab world, contrary to Turkey's policy which has been favorable toward pro-people change in the region. It must also be pointed out that Saudi policies in favor of Western invaders have contributed to regional stability. The American invasion of Iraq and the subsequent U.S. neocon and Zionist collaboration in letting Iran extend its hegemony over a great Arab country could not happen without Saudi Arabia's mindless policies that favored Western intervention. The Saudis still fail to understand the dangers posed by the U.S., even though the American system clearly aims to target Saudi Arabia.

It is also true that the Saudi-backed junta regime in Egypt will be the biggest stumbling block in the smooth operability of a grand regional alliance. It is Saudi Arabia's responsibility alone to fix the past mistakes and develop a new thinking without wasting time. Though the Saudis are going through an economic slowdown due to plunging oil prices, they still posses a strong financial muscle. Saudi Arabia is increasingly anxious because of U.S. dealings with the Iranians. To remain relevant in the emerging regional power structure, Saudis must be able to trust a country like Turkey because of common interests and the goodwill that exists at both government and social level.

On the other hand, Pakistan is slowly coming out of the U.S.'s tentacles. Pakistan's not so good relation with the U.S. simply means that Pakistan also wants other regional powers on its side after developing a deep-rooted strategic relation with China.

Pakistan is the only declared nuclear power among these three countries and can also work as Turkey's direct window to emerging global power and economic powerhouse China. Possibilities of many new global multilateral relationships, independent of the U.S., will emerge if Turkey, Pakistan and Saudi Arabia can come together to tackle the emerging new global situation.

Pakistan has decades of strategic relations with Saudi Arabia and it has also developed very strong and diversified relations with Turkey in the last few years. Turkey has also become one of the major defense exporters to Pakistan. Pakistan is already in close coordination with Turkey on Middle Eastern issues. When Saudi Arabia asked for Pakistan's military help in its Yemen offensive, the leadership in Pakistan swiftly started to follow the Turkish advice on whether to directly take part in military operations in Yemen or not. Looking back, it is clear the Saudi move in Yemen was not well-planned, although there was a need to prevent Iranian dangerous maneuvers in Yemen.

Turkey has long been a member of the U.S.-led North Atlantic Treaty Organization (NATO) alliance and Pakistan has recently become the member of China-Russia-led rival bloc the Shanghai Cooperation Organization (SCO). Majority of Saudi Arabia's oil export goes to the main protagonists of these two rival military blocs. This makes Turkey and Pakistan along with Saudi Arabia a good combination in the geopolitics of the greater Middle East.

It must also be monitored very carefully that decades of American meddling in the region should not be replaced with the intrusion of another outside power or a foreign military block. The foreign meddling of imperial powers has had a catastrophic effect on the region. Turkey will have to make sure that such a void should not be filled by the any other outside power in the region and for that it should work towards creating a strong military bloc starting with Saudi Arabia and Pakistan. Other regional countries can join the alliance later.

Some countries in the region may not be able to digest the idea of this regional military alliance and they may thus try to preserve the role of outside foreign powers in the regional security architecture. This issue needs to be noted and appropriately dealt with using all means.

Once this alliance is strengthened, the Saudi-led military solidarity group of OIC member states can be merged with it. Turkey possesses the necessary capacity and experience to work as a moderator of such an alliance and it is the only country capable of reducing the menace of sectarianism in the region. Turkey can check the Iranian sectarian influence and can also temperate Saudi Arabia's course of action.

The alliance's combined military hardware inventory is quite sophisticated. Its military is well trained and battle hardened and the intelligence system is quite capable to counter global threats. Their combined economy will create incentives for cooperation. Turkey will have to work as an anchor for this broad based strategic alliance. This military and economic alliance can gradually reduce the meddling of outside powers and guide the region toward durable peace and lasting stability.