Turkey is hopeful over Trump, but showdown with Brussels is going to backfire on EU 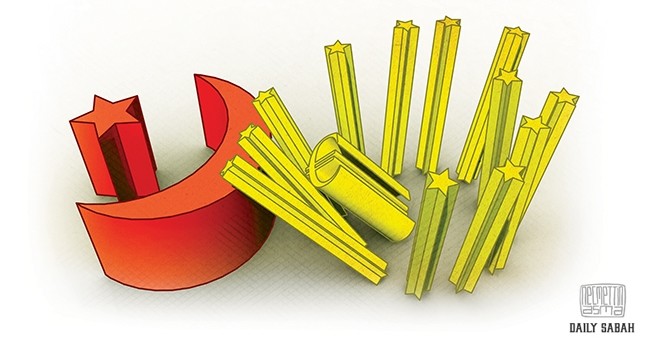 Brussels is now turning on Ankara and making threats. But Erdoğan's threat of sending Syrian refugees over its border into Greece should be taken seriously

For those in the West, it was a defeat for mainstream media which lost even more credibility and not only CNN which played a dirty game of trying to tip the balance of favor toward the Clinton camp, but many other titles who simply could not help themselves but indulge in playing politics. For the Middle East, such antics were all part of the hypocrisy of the West which continues to dictate to countries in the region about democracy, human rights and liberty.

But how far can this implausible charade be taken before things start to get out of hand? Or perhaps they have already.

It was barely a few weeks ago when the EU's silence over the attempted coup spoke volumes over what the Brussels machine was really hoping for, as leading members of European Parliament had already voiced their concerns about how President Recep Tayyip Erdoğan was running the country. Let's be clear. Those in Brussels now threatening Turkey wanted a coup in Turkey to succeed.

But then, comically, those same members of European Parliament arrived in Ankara to try and soften up the administration into accepting the EU's terms on a refugee barter program which effectively kept the lion's share of Syrian refugees in Turkey in exchange for giving Turks visa-free travel in the EU.

It was never going to work as the EU's demands over terrorists were never going to be agreed to by the Erdoğan administration due to the implications toward PKK members. Notably some red top British tabloids were already writing sensational headlines about Turkey blackmailing the EU with this "threat" of flooding Europe with Syrian refugees. But few now will appreciate that the EU's decisions that it has taken both toward the Syrian refugee crisis and Turkey in general have been those of a child meddling in matters which it cannot possibly understand. A series of really bad moves by the EU in Brussels has now led to a tipping point situation with Turkey.

After 16 years of the EU playing this game of dangling EU membership at the jaws of Turkey, now Erdoğan is calling its bluff. We are now at a point of no more talking. Action only. And it's the EU's turn now to make the move as a recent decision to grant Gülenist activists fleeing Turkey refugee status in the EU was surely one of its most ill-conceived yet. The final slap in the face from the West and it came from Brussels rather than Washington. What is Erdoğan to do?

It is as though he is dealing with madmen in Brussels. People who have lost all sense of reality about what is the real issue and prefer to indulge themselves with fantasies about just who is the mouse and who is the cat in this crisis. And it is not just the EU. The Donald Trump phenomenon is incredible in that it is projecting a tawdry reality few in the West want to admit which is that both the state itself and its poorer cousin – the fourth estate – are both in such shambles that they cannot see the trees for the wood.

People are crying out for a change. They may not know what kind of change they want as this is the unfettered privilege of being ignorant and relying on politicians for leadership. But they want change. Yet mainstream media is in a crisis along with the establishments they serve.

Was the BBC having a joke when it recently penned an article "Is Turkey a Democracy?" Was infamous British irony being used here? Or was it merely following the calls from its own government which rolled over on its back when Washington told it to close down Russia's RT media operation in London? Where was the democracy in such a move more akin to countries in Africa and the Middle East who do such things: Shut down media outlets that do not resonate the political ideologies of the autocracies in power.

I don't think my own country Britain really has the credibility to question Turkey's democratic ranking, especially given that Britain's own referendum on whether to leave the EU appears to have been over ruled by the judiciary, a coup de grace which could have been written by Graeme Greene in a far flung African outpost, stinking of colonial heat and decay, with Englishmen in linen propping up local dictators and their vast entourages and loose women. The West is not losing its religion. It is losing its grasp on what the basic tenants of democracy are, or were, and now can only look at poorer countries on its extended horizons to mock and patronize as the moral tutelage creed is handed down to these backwaters in the same way as rice bags of aid is thrown out of the back of Hercules C130s. It comes as a package. The West preaching about Turkey's human rights or "democracy" is all part of the deal of doing business with the West. Britain's BBC article questioning Turkey's democratic merit is part and parcel of today's new failed Western states. It is as though poorer countries with new emerging markets and political apparatus are all part of the PR fodder that Western countries must gouge themselves on, for people back home. The article about Turkey's democracy by the BBC was for British people. Not for anyone else. It was almost propaganda for the stirring masses in foggy north London suburbs to remind the WhatsApp generation in the U.K. that Britain is still great. Well, sort of.

Britain closed down the RT in London. Amazing. No explanation was even required as, in this new world order, where democratic accountability is worth as much as a spammed email from your local UKIP councilor, no one really pointed out in the grey columns of our fine press that this is exactly what banana republics do in Africa. This is what African despots in ill-fitting RayBans do in backward, malaria-infested hell holes which we in the West call "third world countries" along with all of the clichés our finest journalists in London – who are mostly 24-year-olds who do not know where Gibraltar is on a map of Europe – can muster. And it was done because Washington told London to do it, as part of an offensive against Russia which most people will not know – as international news in this new world order is almost an extinct species of information – is building up militarily. NATO is preparing itself for war with Russia.

Why don't you know about this? Could it be possibly that the manpower, time, money and resources that were required to write the daft piece about Turkey and democracy did not stretch to writing about NATO's build-up of troops and equipment in the East? Some 4,000 soldiers and tanks have been sent by NATO countries just recently to station themselves in Baltic countries on Russia's border prompting Russia to react in only the way a country threatened with a third world war would: Send 300,000 of its own troops there as well.

NOW, TRUMP IS THE ALMIGHTY KING OF HOLY AMERICA, WHAT IS NEXT?

But wait. What was it really all about in the first place? Could it have been Obama's misjudgment in Ukraine or his total off-the-scale failure in the Middle East that prompted such madness? Are we about to have a third world war because Obama needs to prove his virility as the president of America?

Contrary to what Western media would have you believe, it has been Russian President Vladimir Putin who reacted very calmly during a period when many would have lost their mind and reached for the button. Putin has held back from any war mongering talk, threats or provocation.

What the Obama period in office has taught us is that the myth of only Republican administrations starting wars around the world to garner political capital back home is just that. A myth. Obama may well have pulled out of Iraq (huge mistake) and Afghanistan, but America's first black president almost single-handedly started a world war with Russia, who did not respond to his fiery speeches about Ukraine, a place in Eastern Europe that probably most of his own advisers in Washington could not find on a map of Europe.

The advent of Trump is all about taking away big power from the central government, as was Brexit. We are looking at a new dawn in the West where large institutions are losing their validity, if not their mojo. Hillary Clinton's war cry in the Middle East was all about her own public image and her proving to Middle Eastern leaders like Syria's Bashar Assad that she was a force to be reckoned with. But more importantly, her constant blaming of everything on the Russians and wanting to start a war in Syria with them, was part of an old guard, a tradition that seems to have been rejected by U.S. voters. I have no doubt that a war in Syria was to serve as a massive distraction for media so that they would give up investigating the monstrous volume of corruption and embezzlement which would have come to light once in office.

Trump's view of Russia is more sober and intelligent. If you hate him for any number of his patent quirks of personality or even his bumbling way toward subjects that deserve more sobriety, then at least remember that he does not have a treasure chest of corrupt deals he needs to mask. And he does not need to start a world war to do that. The West is about to turn on Turkey now as the EU signals to its journalists by name in Brussels that Erdoğan is the new target. But it is all about creating an even bigger smoke screen to hide the calamity and chaos which is at their feet in Brussels.