Uncompromising Turkey: blackmailing EU or divulging its fusion of pharisaism 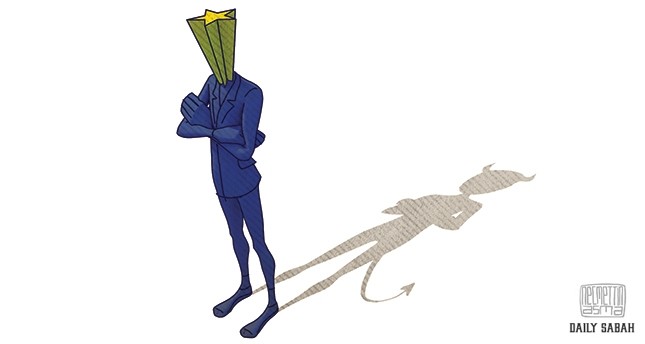 Europe should know that if it loses Turkey one day, it will not be because of Turkey's relations with Russia, China, or the Islamic world, but rather because of their incapability to seriously estimate the enormity of the loss of losing Turkey

President Recep Tayyip Erdoğan angrily reacted to the EU's vote to freeze his country's accession bid to the European bloc: "You've never acted honorably." The European Union (EU), he added, has never been sincere and honest with Turkey.

Referring to the European Parliament's non-binding vote to freeze EU-membership talks with Turkey, President Erdoğan also reaffirmed, "Neither me, nor my people buy your bluffs." Erdoğan also warned the EU on Friday, "You've to be careful, if you go any further, border gates could be opened." This is not the first time that President Erdoğan straightforwardly portended the EU should it proceed with its procrastination and deceptive maneuvers.

On March 18, Turkey and the EU forged a refugee pact in which Turkey pledged to stem the flow of migrants to Europe and in return the EU offered a package of incentives to accelerate Turkey's long-stalled EU membership bid along with visa-free travel for Turkish citizens. The EU also vowed to speed up the allocation of 3 billion euros in aid to Turkey to help migrants.

However, there has been no ostensible progress on the visa issue and the accession negotiations. The EU has been marketing illusions not only to Turkey but also to its own members. Turkey has been largely successful in decreasing the number of migrants crossing the Aegean Sea between Turkey and Greece, while the EU has failed to keep its side of the deal. Despite its commitments to relocate 66,400 refugees from Greece, member states have so far only pledged 1,539 spaces, and only 325 actual relocations have occurred. Amidst all those failures to keep its promises, the European Parliament has brought the controversial vote.

What lured the snake out of hiding?

Everybody knows that the parliamentary vote is non-binding. More surprisingly, earlier this month, all EU foreign ministers, with the exception of Austria, stated that they were in favor of continuing the accession talks. So, what happened?

It wouldn't be strange if you knew the cause. Recently, Turkey has issued an arrest warrant against the leader of the PKK's Syrian branch, the Democratic Union Party (PYD) terror group's Salih Muslim, who orchestrated the terrorist attack that took place in Ankara last February and claimed the lives of 29 innocent people and injured more than 60. Along with Muslim, warrants have been issued against 47 other PKK/PYD terrorists, including senior PKK leaders in European countries, who will be arrested and prosecuted for perpetrating other terrorist outbreaks.

This move followed the government's clampdown on the pro-PKK parliamentarians of the Peoples' Democratic Party (HDP). The Turkish Supreme Court of Appeals recently approved a 10-month-imprisonment for HDP Co-Chair Figen Yüksekdağ because it publically showed its unequivocal support to the outlawed terrorists of the PKK by attending funerals of PKK affiliates in southern Adana province.

It's no secret that the crisis between Turkey and the European bloc wasn't started by the recent crossfire, in particular, it deteriorated after the coup attempt in July. Turkey has accused EU of failing to show solidarity. Turks were rather infuriated by the Europeans' exaggerated reaction to the arrest process that targeted the coup plotters of the Gülenist Terror Group (FETÖ) on the deadly July 15 night. The EU seemed more worried about the rights of the killer putschists than the atrociousness of the crime they perpetrated against the democratic institutions of a NATO member.

EU showed extraordinary sympathy to those who disrupted a democratic sovereign state, unprecedentedly attacked its Parliament and presidential palace and triggered dismay among their fellow citizens. Almost 300 people were killed when the purported rogue armed forces hijacked the whole country and ruthlessly killed innocent citizens.

They're not only defending destabilizers of a democratic state, they are also asking Turkey to show mercy to murders and terrorists. The EU offers a safe haven to some of those plotters to promote their propaganda against Turkey, while they ask Turkey to take the full responsibility for the increasing influxes of refugees.

A bluffer wearing the mask of piety

A host of European columnists accuse Turkey of deploying Syrian migrants as a political weapon in diplomacy and completely turn a blind eye when it comes to Europe's unfulfilled promises.

European Commission chief spokesman Margaritis Schinas reiterated the European body's commitment to the refugee deal: "We are abiding by the EU-Turkey deal on refugees, and we will do everything we can to guarantee its success." His remarks came after President Erdoğan accused the EU of breaking all its promises on refugees.

By outlawing refugees, militarizing its borders and franchising non-EU countries to handle migrants' problems, the EU has managed to maintain its three-pronged strategy to push the problem outside Europe's frontiers and pretend that it's solved.

Lately, instead of combating the dissemination of racist, xenophobic attacks, some European mainstream media outlets succeeded in generating hostile and antagonistic feelings toward immigrants and refugees.

Unlike the claimers of democracy, Turkey has miraculously sustained a state of solidarity and integrating policies for more than 3 million refugees and immigrants, whereas, the EU clamored and growled when 50,000 refugees massed near the Bulgarian border checkpoint. Europeans recognized Erdoğan's words, "Do not forget: The West needs Turkey."

Hundreds of innocent refugees who escaped the brutal war in Syria have drowned in the Aegean Sea en route from Turkey to Greece on unseaworthy boats. The EU prioritizes its alleged clich

és of democracy and European values over drowning bodies of innocent children. The EU's mainstream media shed tears over an image of the lifeless body of the three-year-old Syrian Aylan Kurdi who washed up on a Turkish beach, but won't put real pressure on their governments and parliaments to generate solutions or even cooperate with Turkey.

The bodies of innocent refugees spurring the European Union into action wouldn't stop if the EU continued its egotistical standpoint toward the crises of the Middle East.

Europe and NATO had yet to understand the actions of the Turkish government since the coup. They are also the least willing to understand the scale of the threat posed to stability by Gülenists and Kurdish terrorists.

It's quite obvious that the entire accession process is in unfathomable trouble with little hope of progress and numerous risk factors that could lead to failure. Faithfully, moving forward is correspondingly unmanageable.

Media reports firmly assert that behind closed doors most European officials concede that full membership is most likely to unfeasible. Therefore, if the EU doesn't officially manifest its readiness to take solid and firm steps to restore Turkish faith in Europeans' sincerity, it should seek to reach an alternative form of engagement that saves face to keep relations moving forward.

For Turkey, it's already moving to sustain and boost its multidimensional foreign policy. Last week, Turkey was chosen as the chair of the Energy Club of the Shanghai Cooperation Organization (SCO) and the chair of the Asian Parliamentary Assembly (APA). Lately, President Erdoğan has said that Turkey could consider membership in the organization as a likeable alternative to the European Union if it continues to dawdle and bluff with regard to its promises. It is the first time a non-full member has become chairman of a club organization.