What does Turkey expect from the West? 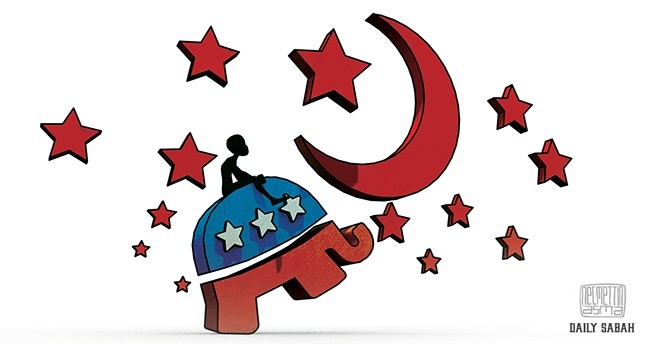 The West has taken a wrong and unethical path, thinking a Turkish government that would blindly obey the West's demands should be welcomed, no matter how it comes to power

Let's admit that relations between Turkey and the U.S. and the EU have been going through a process of unprecedented difficulties. It is apparent that this situation is not desirable for either party. Nor is it advantageous to any side, even if some might actually desire it.

The arguments of those who blame Turkey for the deterioration of relations emphasize a presumed decline of democracy in Turkey. Their arguments are basically no different from what any PKK leader cites in their regular statements. Again, Fetullah Gülen's henchmen, who attempted a coup of unprecedented brutality in Turkey on July 15, have made similar accusations to win the West over to their cause. Secular elites who have ruled Turkey for 80 years also resort to similar arguments.

The PKK and the Democratic Union Party (PYD) have killed five Kurdish Justice and Development Party (AK Party) officials in front of their children in the last two months, deployed child soldiers, capitalized on the reconciliation process to turn Turkey's southeast into an arsenal and made life unbearable there, digging trenches and carrying out full-scale ethnic cleansing in northern Syria. It is really interesting that their arguments converge with those of the Gülenist Terror Group (FETÖ), which killed 248 citizens during the July 15 coup attempt and bombed the Presidential Palace and Parliament, and that Turkey's secular elites, who hold deadly grudges against the AK Party government, cling to these arguments.

If only the truth was so simple. If only the U.S. and EU countries had not adopted such hostile attitudes toward Turkey based on such flimsy grounds. If Turkey had been a dictatorship that suspended democracy and this attitude had been adopted because of that, we would have been able to say that, for the first time, the West acted not within the rules of realpolitik but the U.N.'s 1948 Universal Declaration of Human Rights. Hence we would have managed to understand its radical approach.

But we know pretty well that the West has been rather lenient toward a dictatorial regime in Egypt, which overthrew an elected and essentially legitimate government, massacred hundreds of civilians while staging the coup, banned political parties and sentenced politicians to death. In Syria, the U.N. has failed to fulfill its responsibility to protect the country's citizens for nearly six years while a genocide is underway especially in Aleppo. Although Syria and Myanmar's Rakhine state have offered perfect cases for applying the Responsibility to Protect (R2P) doctrine, Iraq was invaded instead on the pretext of non-existent chemical weapons. As a result, today we are faced with the monster that is Daesh.

The anti-democratic atmosphere in Turkey before 2002 was beyond comparison with the situation in 2016, with military coups occurring every 10 years, minorities groaning under repression and the Kurdish identity, Kurdish language, religiosity and Alevi practices banned. However, we never saw such a hostile attitude from the West during that period.

As Turkey averted FETÖ's coup and invasion attempt on July 15 through a historic democratic resistance, unfortunately we did not have our Western friends beside us. Moreover, we have even witnessed statements by the media, NGOs and politicians amounting to sympathy for the coup. While invader putschists were trying to strangle democracy, the U.S. and the EU made statements "calling for restraint by all parties." NATO has issued strange statements. It was as if the Turkish people were being chastised for foiling the coup. Instead of condemning the coup attempt, they brushed over it with anodyne remarks. But Turkey's right to self-defense regarding the capture and punishment of putschists began to be criticized.

It is well known, however, that after the Cold War, the former Iron Curtain countries passed many laws in order to cleanse government agencies of vestiges of the old regime. During the struggle against the Baader-Meinhof terrorist group alone, which had killed around 40 people over the years, tens of thousands of people were detained and clean-up operations were conducted. On the other hand, though Turkey has not proclaimed martial law but just declared a three-month state of emergency, its efforts toward ridding the state of terrorist elements were and are interpreted as a violation of democracy, despite serious evidence to the contrary.

It means that there are more reasons than meet the eye for the West's hostile attitudes toward Turkey, which show a lack of empathy and are incompatible with an alliance relationship.

I think James Jeffrey, the U.S. ambassador to Turkey from 2008 to 2010, has aptly explained the main reason for this. Having said in an interview with a Turkish daily that the majority of indicators point to the Gülenists' involvement in the July 15 coup attempt, Jeffrey explained the West's hostile attitude as follows:

"[President Recep Tayyip] Erdoğan is not liked in Washington. He is not liked in Europe, either. He is seen as authoritarian, a far-from-ideal player. The West had previously dealt with and continues to deal with many leaders, who are more authoritarian than Erdoğan. But the difference is that Saudis and Egyptians – sorry for my wording – fawn over us under all circumstances. They pretend to share similar values with us, keeping in mind F-16s and alliance relationships. On the other hand, Erdoğan opposes us, tells our faults to our faces, not trying to be friendly with us. Leaders who are more authoritarian than Erdoğan, however, don't see any harm in posing as our friends. Even Putin has behaved like that until very recently. That's why Erdoğan is not liked in Washington. I know that it's not fair at all."

Yes, it's not a question of Turkey's report card on democracy. If it was so, we would use that opportunity to reach a common understanding. The question is that Turkey that the West has gotten accustomed to in the last 70 years does not exist anymore. If Erdoğan had established with the West the kind of relationship that Egypt's Abdel-Fattah el-Sissi has, what he does in Turkey would not matter so much. It's not just me who says this, but both history and a former U.S. ambassador.

Turkey demands an equal relationship with its Western allies now. It wants its own opinions and expectations to be taken into consideration and Ankara insists on this. Of course, Erdoğan and his party being conservative is also a factor here. I'm just talking about that famous Western arrogance in its views on Islam and the East. But it should not be exaggerated. The real problem is that Turkey is not a country that will unquestioningly do what its Western allies want it to do.

Under these circumstances, the West has taken a wrong and unethical path, thinking a Turkish government that would blindly obey the West's demands should be welcomed, no matter how it comes to power. But I cannot see a pragmatic mindset here, either. That would be utterly unwise.

Turkey's defeat against an invasion attempt like the one launched on July 15, or an ensuing drift into sectarian conflict would have created a vacuum effect for Europe, though the U.S. is securely far from it, bringing Raqqa to the doorsteps of Athens and Vienna. Neighboring the Middle East and Europe, Turkey is the only Western country in its region with its state structure, free elections, a functioning legal system, a strong democracy and economy, young population and huge potential for consumption. As a Muslim nation opposed to radicals, Turkey is so valuable to the West that, let alone destroy it, it should be treated with kid gloves. The democratic, political, and economic reforms implemented by Turkey in the last 15 years prove that it offers a model for the Middle East. Turkey's collapse would create a vacuum that can engulf the whole world and possibly lead to a third world war.

Turkey is a strong barrier between Europe and the Middle East, which welcomed 3 million refugees regardless of their religion, ethnicity, or language and spent $25 billion for this cause. For the U.S., Turkey is a big ally that allows it to devote its energy to other places.

For some, Turkey being divided into three satellite states, after a civil war like Syria's, may look quite appealing for a variety of reasons. But Turkey has such brave people and such an established state tradition that it is determined to prevent this until the last man is standing. Indeed, it proved this on July 15. It may sound strange to you, but millions of people in Turkey envy those who have fallen martyrs on the night of the failed coup. These people lament "If only I had also fallen martyr or become a veteran."

Those who see this as Erdoğan's personal success, whose skills are appreciated even by his detractors, are gravely mistaken. He is a truly successful leader, who has been riding a groundswell. Those who condescend to take an objective look at what happened in Turkey over the last 15 years can see that this is a popular movement, that this movement is utterly democratic, free from violence, but is of a determined nature at the same time.

Therefore, just as the July 15 coup attempt failed, so will economic manipulation. One should understand that it would be a rather foolish move and is impossible to bring back the old Turkey, that losing Turkey's friendship would hurt the West more than Turkey.

I am sure there are people in the West who acknowledge this fact. Turkey demands only an equal and honorable partnership relationship befitting its power. It needs to improve its capabilities and this need leads to irresistible aspirations. Not only Erdoğan but all of us know that this need cannot be satisfied through the role assigned to Turkey as part of the 1952 [NATO] concept.

It is definitely necessary to improve relations quickly and through a trust-based approach. Let's hope that it will be achieved during President-elect Donald Trump's term.

Turkish people are ready to bear the pain. Curiously enough, they even desire it. But they would not reject compromises that contain definitions of a new type of relationship and identify areas of cooperation.
RELATED TOPICS