Rapprochement between Turkey, Iraq: Implications for the region 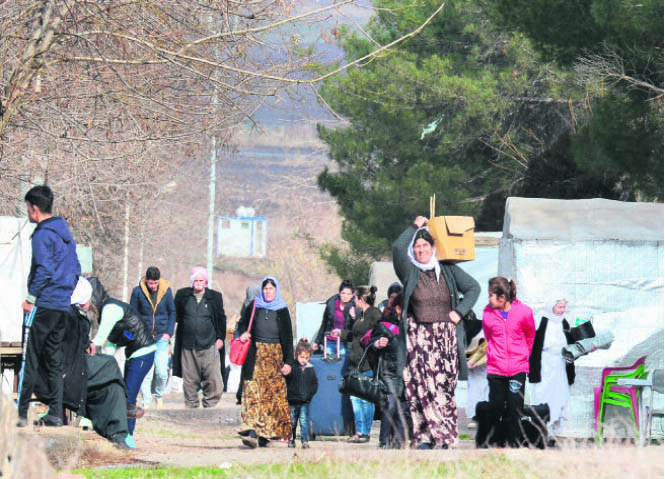 Refugees, terrorism & sharing of water resources are just a few of many issues of discussion between neighbors Iraq & Turkey. This picture shows Yazidi refugees from Iraq carry their belongings on Jan. 3 in Diyarbaku0131r as they change their camp.
by Muhittin Ataman Jan 09, 2017 12:00 am

In a historic visit by the Turkish PM to Iraq, the two governments emphasized mutual respect for one another's territorial integrity and national sovereignty, cooperation to fight against terror and non-state actors. This rapprochement between Turkey and Iraq will consolidate the Iraqi return to a national and independent foreign policy

Turkey and Iraq are interdependent neighboring countries, which share a long history and a common culture. Historically the bilateral relations between the two countries have been friendly; however, there have been ups and downs since the invasion of Iraq by the United States in 2003. The dispute between Turkey and Iraq reached its peak in October 2016 over the presence of Turkish troops at Bashiqa Camp, northeast of Mosul.

Changing regional dynamics forced the two countries to restructure their foreign policy priorities. Turkey had been trying to establish stability axes in the Middle East throughout the first decade of the 21st century. Unfortunately the rupture of the Arab insurgencies ended this effort. The regional system was hurled from the process of establishing free trade area with some regional countries into a chaotic region full of failed states. Accordingly, Turkey has changed its foreign policy perspective from "zero problem with neighbors" to "increasing friends and decreasing enemies" after the otherization of Turkey by global powers.

The rapprochement between Turkey and Iraq is the continuation of the normalization of its relations with antagonistic states such as Russia and Israel. Ankara has initiated a rapprochement process with Russia during the summer of 2016, which ended up with close cooperation on many economic and political issues. Similarly, it initiated the process of diplomatic normalization with Israel after five years.

Reconciliation between Ankara and Baghdad started with a phone call between Turkish President Erdoğan and Iraqi Prime Minister Abadi on the last day of 2016. They have discussed both bilateral relations and the struggle against terrorist groups in the region. During this conversation the two leaders have agreed on the visit of Turkish Prime Minister Binali Yıldırım to Baghdad.

Prime Minister made his first official visit in 2017 to Iraq. Yıldırım and Abadi co-presided the 3rd High Level Strategic Cooperation Council Meeting, which is considered a historical visit for both countries and for the future of the region. After the negotiations, Turkey and Iraq have agreed on several issues. First of all, they have reinitiated a direct political dialogue to build mutual trust between the two countries. Turkey emphasized its intention for its contribution to the national security of Iraq, to the reconstruction of the country, and to its economic development. The discussion of the water issue is an indication of the comprehensiveness of the negotiations and of the intention to contemplate not only political problems but also economic and technical issues.

Second, they have emphasized mutual respect for one another's territorial integrity and national sovereignty, and agreed on non-interference into one another's domestic affairs. If the two countries are able to secure their borders, they will make an enormous contribution to the regional stability. A strong cooperation between Turkey and Iraq in security issues will decrease, if not prevent, the illegal passages between Iraq, Turkey and Syria. As such, it will reduce the mobility and thus effectiveness of terrorist organizations.

Third, Turkey and Iraq showed their determination to struggle against violent non-state actors and terrorist organizations. In this context, they decided to negotiate the status of the Turkish troops in Bashiqa Camp. For now, the sides agreed that the camp belongs to Iraq, but the Turkish troops will remain there for a while. On the other hand, Abadi declared that the Iraqi government with the support of the Peshmerge forces would throw PKK out of the Iraqi territories, i.e. the Sinjar region and Qandil Mountains. Abadi also assured Turkey that the Iraqi government will do its best not allow PKK to harm Turkey from its territories. Furthermore, Ankara and Baghdad decided to continue their efforts to find solutions to regional problems through inter-governmental mechanisms. Thus, they will reduce the influence of the regional non-state transnational actors. That is, it is possible that the Iraqi government will decrease the power and influence of the Hashdi Sha'bi militias, who are mostly under the Iranian control, in the national politics.

Lastly, the rapprochement between Turkey and Iraq can be read as one of the consequences of the global developments such as the rapprochement between Turkey and Russia and the election of Donald Trump as the president of the United States. Russia's cooperation with Turkey cooled its relations with Iran. Turkey and Russia signed a historic ceasefire agreement on the Syrian crisis, and both Ankara and Moscow became the guarantors of the ceasefire. Iran was downgraded in the Syrian crisis. Trump's strong anti-Iranian position will probably further alienate Iran in the Middle East. Considering strong American influence in Iraq, changing Turkish-Russian relations and the Turkish-Israeli relations an anti-Iranian period may start in the region. In this new context, it is expected from Iraq to desist its pro-Iranian stance.

In conclusion, Turkey and Iraq opened a new page in their bilateral relations, which has strong implications for regional developments. The year 2017 started with a significant event, and probably it will proceed in an interesting way. As a result of the new American administration, elections in many European countries, and presidential elections in Iran, the regional cards will be reused in 2017 and it seems that both Turkey and Iraq will try to benefit from these new events.

Muhittin Ataman is Director of Foreign Policy Studies at SETA Foundation. He is a professor in the Department of International Relations at Social Sciences University of Ankara. Ataman is also the Editor-in-Chief of Insight Turkey.
Last Update: Jan 09, 2017 2:10 am
RELATED TOPICS