The striking similarities between fundamentalist laicism and Daesh ideology 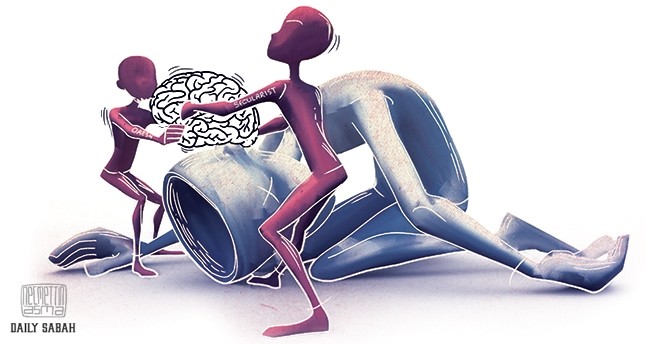 Fundamentalist laicism and Daesh mentality are no different from one another. Both are destructive movements with a love for sovereignty; their members do not have a right to choose but to obey their group's deadly dogmas

At a time when Turkey is fighting against several terrorist groups, some intellectuals and politicians claim that the only way to address the country's problems is to strengthen laicism. Although the advocates of this view focus on the attacks of Daesh and the Gülenist Terror Group (FETÖ) in particular, it is important to recall that not all terrorist groups hide behind a veil of religion. As such, how exactly promoting laicism will weaken left-wing terrorists such as the PKK and the Revolutionary People's Liberation Party-front (DHKP-C) remains unclear. Keeping in mind that Turkey's laicist elite reduces laicism to the oppression of religious communities, individuals and symbols, it is clear that their plan — which actually advocates a form of fundamentalist laicism — will not actually stop the PKK and DHKP-C, whose members already hate religion and religious people. In this sense, they effectively ignore PKK terrorism and focus on Daesh and FETÖ in a thinly veiled effort to promote authoritarian laicism, which many Turks thought was a thing of the past. As a matter of fact, fundamentalist laicist missionaries, who have recently emerged in Turkey, deliver passionate speeches across the country and seek to convince the people that the answer to our problems is good old laicism.

For decades, the Turkish elite subscribed to a fundamentalist-authoritarian interpretation of laicism, which they constructed primarily through symbols. This approach, which can be described as fundamentalist laicism, was imposed on society as an ideal to penetrate all aspects of life and be adopted by all rather than a means to maintain social peace. Referring to fundamentalist laicism as a childhood illness of laicism, sociologist Nur Vergin argues that fundamentalist laicism entailed authoritarianism, whereas laicism itself does not serve as a vessel of ethical values. In this sense, the ultra-laicist worldview, which imposes on the people a singular interpretation of laicism, which promotes a singular lifestyle and mindset, is quite similar to the mentality of Daesh – which also imposes on its followers a singular interpretation of scripture and a singular lifestyle. It is important to acknowledge their similarities not just to analyze these destructive ideologies but also to take a stand against them.

After a decades-long restriction on the religious headscarf, the Justice and Development Party (AK Party) government's democratization efforts made the Turkish people believe that the violations of the freedom of religion had come to an end. In recent weeks, however, the emergence of "laicist missionaries" in public areas, including college campuses and coffee shops, and the mainstream media's support for them raised the question of whether religious freedom could be restricted again in the future.

The "laicist missionaries" hijack social spaces, which are shared by people of all religious and political backgrounds, to engage in an archaic tirade about so-called reactionaries. According to their view, anyone who disagrees with them is a reactionary, a Daesh supporter, a proponent of the executive presidency or a fascist. Here is the message that a group of laicist missionaries spread at Ege University's Medical School: "There is a flag that must be raised in the face of reactionaries. That flag is the flag of laicism. Today, laicism means freedom and fraternity. We urge everyone to become soldiers of this struggle. We urge you to hold accountable the reactionaries and the supporters of presidentialism."

Even though the advocates of this view believe themselves to be the exact opposite of Daesh radicalism, there are major parallels between their message and the sermons of Daesh preachers. In Konstantiniyye, Daesh's Turkish-language publication, Abu Bakr al-Baghdadi made the following call to the group's supporters: "Oh fellow Muslim! We invite you not out of weakness or helplessness. We invite you to offer advice out of our love and compassion toward you. We remind you and invite you so that you can avoid Allah's wrath, torment and punishment!"

Ironically, the two groups share the same behavioral patterns even though one of them claims to oppose Daesh and the other positions itself against infidels. First of all, there are striking similarities between their self-proclaimed goals: By engaging in discriminatory and exclusionist propaganda, both groups seek to weaken the mainstream, which constitutes the majority of our society and rejects radicalism, in order to gain support and pave the way to conflict and rupture. Although the social mainstream – which brings together religious people, seculars, right-wingers and social democrats alike – remains cautious about radicals on both sides, it should be clear that the mainstream needs to be strengthened.

Just as Daesh supporters believe themselves to be spreading the truth, laicist missionaries assume that they alone understand the truth. The belief that they represent the truth makes them eager to label non-members as the "dangerous other." While Daesh declares the "others" to be unbelievers and infidels, the fundamentalist laicists consolidate their own position by identifying their "others" as reactionaries. For both groups, the world is divided between good and evil. Needless to say, members of each group believe themselves to be the good guys. Although their world is strictly black or white, they engage in propaganda to spread their message to the grey area, which is a rich source of new recruits.

Both groups, furthermore, like to talk about a "golden age" – which does not refer to a comprehensive reading of the past but individual events, people and periods that they pick and choose from the pages of history. As such, they do not refrain from distorting historical facts to serve their ideology: While Daesh instrumentalizes Islamic history to spread its message, the fundamentalist laicists engage in a selective reading of the Republican history. The attitude of both groups toward written sources displays the same pattern: Holy scripture and other texts are never interpreted in whole but often used as a source for phrases to be taken out of context and used to motivate group members to take action.

Another similarity between the two groups is that both Daesh and the fundamentalist laicists oppose Turkey's Islamic approach – a constructive notion that is at peace with modern life — and the idea of religion based on wisdom. As a matter of fact, both groups are deeply concerned about the emerging modern conservative middle class in Turkey. According to the fundamentalist laicists, all religious notions and interpretations ought to be destroyed or, at the very least, repressed. They see the public visibility of religious symbols as a challenge to their ideology and consider it absolutely necessary to deprive headscarf-wearing young people of educational opportunities – even though they glorify science. As such, oppression is presented as liberation.

The Daesh mentality is no different: There is no room for religious interpretation except their own. Every alternative reading of scripture is an act of infidelity and apostasy – an act punishable by death. Likewise, the wisdom-based Islamic current in Turkey represents a major challenge before the territorial ambitions of Daesh. In this sense, they believe that the Turkish interpretation of religion must be destroyed or, at the very least, weakened in order to facilitate radicalization. As such, anyone who does not cover their face or grow a beard represents "the other" for Daesh. For them, people like Yunus Emre or Rumi are infidels. And people who engage in jihad through science and art rather than war and promote constructive acts at the expense of destruction have strayed out of the righteous path.

Both fundamentalist laicism and Daesh represent destructive mindsets that harbor a love for sovereignty. Their members are not modest and have claims pertinent to all of society. In their view, their respective interpretations of "liberation" and "salvation" apply to the rest of their communities and humanity as a whole. As such, their counterparts do not have a right to choose. Instead, they are expected to obey the group – whether voluntarily or forcibly.

As Turkey goes through a difficult time, facing threats from multiple terrorist groups, it is more important today than ever to empower people with a will to co-exist with others in order to shelter our country from the polarizing effects of destructive movements. The first step toward accomplishing this goal is to acknowledge that all totalitarian groups, including fundamentalist laicists and extremist religious movements, are awfully similar.