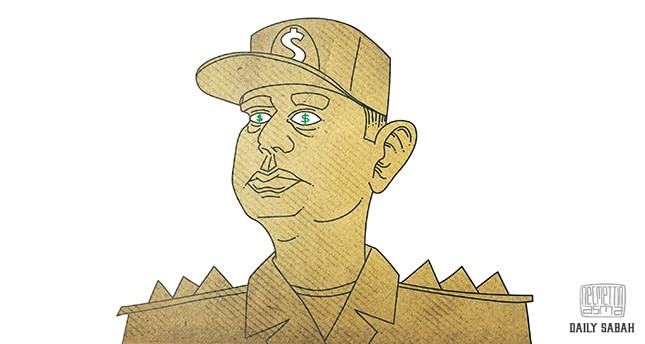 Illustration by Necmettin Asma
by Mohammad Pervez Bilgrami Jan 20, 2017 12:00 am

Saudi Arabia's most notable counterrevolution product, Egypt's coup leader el-Sissi, who Saudi Arabia magnanimously helped to bring to power, has not only started cozying with anti-Saudi forces in the region, but now is also openly challenging Saudi Arabia's regional policies

Mohammad Pervez Bilgrami *The rapidly changing scenarios in the Middle East have given the regional geopolitics a new twist where old permutations and combinations have already become outmoded and new factors are now emerging on the regional chessboard.

In the present scenario, Saudi Arabia is in deep trouble mostly due its stale and myopic policies of patronizing the counterrevolution in the Middle East and North Africa.

Saudi Arabia's most notable counterrevolution product, Egypt's coup leader Abdel Fattah el-Sissi whom Saudi Arabia magnanimously helped to bring to power, has not only started cozying up to anti-Saudi forces in the region, but now el-Sissi's Egypt is also openly challenging Saudi Arabia's regional policies. The latest case is the Egyptian objection to the proposed Saudi military base in the tiny Red Sea state of Djibouti.

Saudi Arabia's patronization of the brutal dictator in Cairo has now started haunting them. El-Sissi not only explicitly supports the butcher of Syria Basher Assad, he is now courting Saudi Arabia's regional foe Iran. Egypt's vote on Oct. 8 to support a Russian Security Council resolution on Aleppo has exposed an unprecedented aperture between Egypt and its teller machine, Saudi Arabia.

It is pertinent to say that Egypt and Iran have not maintained diplomatic relations for the last three decades. It was Saudi Arabia and its cohorts who had expressed uneasiness on the then democratically elected President Mohamed Morsi's Tehran visit in the Non Aligned Movement (NAM) summit in 2013.

Under the inattentive eyes of effete Saudi rulers, the U.S. has swiftly modified its Iran policy, and their covert understanding from the Afghanistan and Iraq invasion has now developed into an overt understanding. The U.S. under Obama and the Ayatollah regime in Tehran have been on the same page on the new regional schematics in the Middle East, and now Saudis are basing everything on the Trump administration rather than taking any proactive stance of their own.

Russians have adopted the region's Shiites as their new partners to attain strategic depth. Iran's imperial hegemonic designs are getting more ambitious. Iran's hyperbolic mullahs and politicians have made things worse by boasting about controlling the four capitals in the Arab world. In an apparent el-Sissi style betrayal of Saudi Arabia's generous financial and diplomatic support, recently Egyptian Petroleum Minister Tarek el-Molla visited Tehran to strike oil supply deals after Saudi Arabia suspended the agreement of supplying oil on deferred payments. In September, Egyptian Foreign Minister Samih Shoukry met for the first time with his Iranian counterpart, Jawad Zarif, during their visits to New York to attend the U.N. General Assembly.

Interestingly, the same Iranian officials from the Ayatollah Khomeini to administration even went to the extent of describing the victory of the Muslim Brotherhood as the "Islamic Awakening" in Egypt and elsewhere. In a quick about-face, Iran seized the opportunity and took full advantage of the change in regime in Cairo, that too in a Saudi-backed coup. Iran further consolidated its position in the Arab world and is now courting the same dictator who dislodged the leader of the "Islamic Awakening" in Egypt.

El-Sissi not only rejected the Saudi-backed efforts to overthrow the regime of Bashar Assad, while reaching out to former-Yemeni president Ali Abdullah Saleh and to his Houthi allies, who captured Sanaa in a military takeover that triggered the Saudi-led military intervention in Yemen. El-Sissi also opened diplomatic channels with the Lebanese Hezbollah, responsible for many massacres in Syria.

Unthinking Saudi minds could not foresee that the U.S., EU and Israelis wanted a ruthless dictator in Egypt who wittingly pulled out Egypt from its leadership role in regional politics; especially the Palestinian conflict and the Syrian conundrum where el-Sissi dutifully followed the instructions from Washington, Brussels and Tel Aviv.

Keeping all these factors in mind Saudi Arabia should mend its ways as quickly as possible to stay relevant in regional geopolitics. The old American security umbrella may carry on providing security cover to the ruling al-Saud regime for quite some time, but the status quoist approach will further erode the remaining Saudi influence in the region.

Saudi Arabia is no longer in a strong position to play any significant role in the many regional crises in Syria, Iraq, Libya and Lebanon, and its operations in Yemen are actually heading toward a dead end. Yemen now seems to have become a stalemate because of poor Saudi planning and execution.

Saudis do not have ample options but to quickly recalibrate their regional policy and abandon the superfluous counterrevolution outlook in their foreign policy. The Saudi course correction will also force the other Gulf Cooperation Council (GCC) member states to shift their foreign policy orientation which has been a disaster since the Arab Awakening started in 2011.

There was a time when Saudi Arabia used to play the role of mediator in the regional crisis; now no one even asks for their mediation in the region. Incumbent Saudi rulers must understand the limitation of soft power. Ultimately you have to use all your cards intelligently, including hard military power.

Their huge diplomatic support and massive financial backing of Egypt's murderous regime not only maimed Egypt's social-political and economic life, it has also negatively affected Syria and Libya. Egypt has become a dilapidated state after el-Sissi's coup. Had the July 2013 coup not succeeded in Egypt, the situation in Syria and Libya would not have been as it is today. Saudi must realize that by orchestrating a coup in Egypt they not only handicapped the largest Arab nation in the world, but also many more millions of Arabs outside Egypt.

It is worth looking back to when the then Saudi leadership had refused to heed incessant Turkish appeals not to orchestrate the heinous coup in Egypt that destroyed the nascent democracy in the most populous Arab country. Sufficed to say, the incumbent Saudi Arabian administration must come out of the delirium transmitted through the previous regime and promptly rectify their moribund Egypt policy to stay relevant in regional geopolitics. To accomplish the much needed policy change, they may accept the help of the good office of Turkey.

It is very difficult for Saudi Arabia to undo the blunder it made in 2013, when it installed el-Sissi to power in Cairo. Saudi Arabia can freeze its aid to the terminally corrupt el-Sissi junta regime and may also support the rival generals against el-Sissi but replacing a brutal general with another general will not bring stability in Egypt, nor will it restore the pragmatic relations between Egypt and Saudi Arabia.

The only thing that can help them to get rid of the atrocious dictator el-Sissi from Cairo is to give the Egyptians back the democracy and dignity they fought and shed their blood for. Once the problem of Egypt gets solved, most of the regional problems will eventually be resolved over the short and medium terms.