What do the constitutional amendments bring? 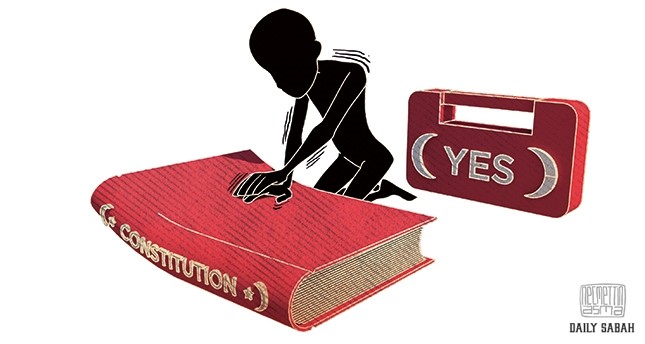 No matter what the result of the referendum to be held in two months, Turkish democracy will be stronger and healthier when the Turkish people have the final say at the ballot box on the much-debated constitution reform package

Turkey is discussing one of the most critical constitutional amendments in its history. A bill proposing constitutional changes is currently being voted on in Parliament. As per the Constitution, constitutional amendments are voted on individually in two rounds of voting. There is a 48-hour cooling off period between the two rounds. When all the articles are voted on in the second round, articles receiving less than 330 votes, the threshold for a referendum, will be dropped. In the last round, the entire package is voted on. If the entire package fails to garner 330 votes, the amendments do not pass in Parliament.

It is a rather lengthy and arduous process. As a member of the Parliamentary Constitution Committee, I have also been involved in the processes in the committee. There, we discussed the 18 articles for 10 days, while working 14 hours a day. Around 300 deputies, whether they were members of the committee or not, spoke for more than 100 hours. At times, tensions ran high as well. Opposition parties, the Republican People's Party (CHP) and the People's Democratic Party (HDP) followed a strategy of tension during the committee stage to block the amendments. The Justice and Development Party (AK Party), which drafted the amendments, and the Nationalist Movement Party (MHP), which supported them, also explained their own theses. All these activities lie within the bounds of democracy.

In a period of 22 days, the duration of the processes in the committee and the General Assembly of Parliament combined, every possible argument about the 18 articles of the amendment package was expressed and theses were put forward. Sadly, the CHP has taken a combative stance incongruous with democracy in the General Assembly of Parliament. MPs from the CHP threw punches and broke the nose of Fatih Şahin, AK Party Deputy Chairman and member for Ankara. It's hard to believe, but another AK Party deputy was bitten in his leg during the same brawl by a CHP deputy.

Here are the changes brought by the 18-article constitutional amendment, in order:

Article 1– It requires adding the word "impartial" after the word "independent" in the Constitution.

Article 2– The number of seats in the Grand National Assembly is raised from 550 to 600.

Article 3– The age requirement to stand as a candidate in an election was lowered from 25 to 18.

Article 4– Parliamentary terms are extended from four to five years.

Articles 5 and 6– The powers of Parliament to scrutinize ministers and Cabinet members are abolished, as a presidential system resembling the French model is introduced. Since the government is not to be formed from within Parliament but to be elected directly by popular vote, there will be no need of a vote of confidence or motion of censure against ministers. The prosecution and trial of ministers is regulated by other articles. Parliament retains its supervisory powers like "general debate," "parliamentary inquiry," "parliamentary investigation" and "written question."

Articles 7 and 8– They regulate the qualifications and the powers of the president. According to these articles, executive powers that are divided between the prime minister and the president in the current system are to be vested in the elected president as the head of state.

Article 12– It gives the president authority to declare a state of emergency.

Article 13– Military courts are abolished to ensure the unity of the judiciary.

Article 14– The structure of the Supreme Board of Judges and Prosecutors (HSYK) is changed. Currently, four members of the 22-member body are selected by the president and 16 by appointed judicial bureaucrats. The restructured HSYK will have 13 members, down from 22 at present, four of whom will be selected by the president and seven by Parliament this time. The justice minister and the undersecretary of the ministry are natural members in both arrangements. The proposed change works in favor of the elected or popular will and against the appointed. While the number of members appointed by the president remains unchanged, Parliament is included in the process. The number of members of the Constitutional Court is reduced from 17 to 15 due to the abolition of military high courts.

Article 15– The president will draw up the annual state budget and submit it to Parliament for approval. Parliamentary approval of the budget is required. In the event that the budget is not approved, a temporary budget is prepared according to the revaluation rate, to keep the government running.

Articles 16, 17 and 18– Since the government system is changed, terms like "prime minister" and "council of ministers" mentioned in the Constitution are removed and the wording of the Constitution is adapted to the new amendments. The last article is about the effective date of the proposed amendments. If approved in the referendum, the new system will come into force by the 2019 elections. However, articles regarding the judiciary and the president's maintaining ties with his/her own party will enter into effect by the date of issue of the law.

As one can see, every article of the constitutional amendments is of critical importance. But what attracts the greatest attention is the change in the governmental system. Though the change is related only with this element, the CHP and the HDP claim that the regime itself changes. However, what changes is not the regime but an inefficient and cumbersome system of government that is vulnerable to bureaucratic tutelage and prone to coalitions. Since republic means rule by people elected by the people, direct election of the executive by the people would further strengthen the republican regime. In fact, the existing system does not have a separation of powers. The executive branch, which originates from the legislative, controls the legislative as well. Executive and legislative powers are intertwined. The amendments allow for a clear separation of executive and legislative powers. Thus, the influence of the executive branch over the legislative branch is eliminated, leading to a strengthened separation of powers.

The CHP and the HDP claim that the amendments put an end to the supervisory powers of Parliament. They base their claim on the abolition of a vote of confidence and motion of censure. However, by its very nature, in a presidential system government comes from the ballot box, not from Parliament. By forming the government in the ballot box, people give a vote of confidence. Since the government does not come from Parliament, no motion of censure is tabled, either. Besides, the practice of tabling motions of censure has almost always failed to serve its purpose throughout our history. In only two out of hundreds of instances could the ministers in question be unseated, and that only through the support of the ruling party.

The first four articles of the Constitution, in other words the characteristics of the regime, are left intact and the unitary and secular structure of the state become stronger. The state (eyalet) system is a structuring that is independent of the presidential system itself. It can be seen both in a parliamentary regime, like Germany's, and in a presidential system, like that of the U.S. The amendments have nothing to do with a state system. The presidential system would not lead to the partitioning of Turkey. On the contrary, it would ensure unity and strengthen the unitary structure. The double-headedness in state governance would be eliminated, the people would directly choose the government, and hence, national sovereignty would be established in a stronger way. Since the people's decisive role is to shape all three powers, it would be impossible to take any decision in defiance of the people.

The presidential system is not an issue of today. It has been on the country's agenda since the early 1970s. All elected leaders who hit the wall of appointed officials and bureaucratic tutelage have talked about the necessity of this system. In the Constitution of 1982, the putschists gave extensive powers and immunity against prosecution to the office of the Presidency in line with their purposes, fashioning it as a guardian of tutelage over elected officials. As the election of the president by popular vote was instituted following the judicial intervention in 2007, a system change has become necessary. Getting rid of this system, which condemns Turkey to coalition governments and regime crises, is aimed at preventing the outbreak of crises in the future.

I tried as best as I could to discuss this constitutional amendment package, which arouses great interest also among our foreign friends. Of course, constitutions are not sacred texts. These amendments and the system proposal have resulted from the history of Turkish democracy. Evolution and improvement of the system will continue in the future as well in response to needs and shortcomings.

Lastly, as the constitutional amendments passed in Parliament, our people will make the final decision in a referendum two months later. As opposed to the hollow, ideological and elitist arguments of the opposition, the process proceeds in a quite democratic manner. People will have the final say. This final word will be said in the ballot box, the very heart of democracy. That word, be it "yes" or "no," has a legitimacy that compels us to accept it respectfully. If democracy and republic mean people deciding about themselves, this is a universal rule, and paying attention to it is our greatest guarantee.
Last Update: Mar 13, 2017 6:11 pm
RELATED TOPICS