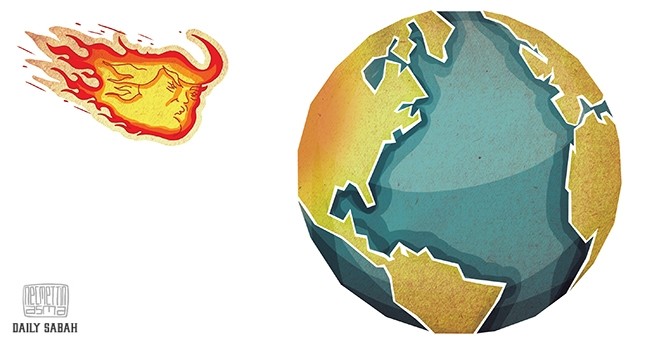 Under attacks by outside barons and terrorists on the inside, Turkey is trying to gain a position in the new global system, which is being shaped by Trump's out-of-line policies and rebalanced international relations

It is impossible to think that the events happening in the U.S., France, Germany, Turkey, the Middle East and the Far East are independent of each other. The world's capitalist system, which was taken under protection by the Metternich system at the Vienna Conference in 1815 and almost completed its institutionalization after World War II following the breaking up of the Ottoman Empire, has now come under scrutiny, together with all its institutions and instruments. The representatives of this established order are opposed to the questioning and are trying to take the doubting countries and their leaders down by whatever means necessary.

Turkey is one of the countries where these events and attacks are most intensely felt and observed.

Terrorist organizations act with different aims but are each led by a sole purpose and they are all attacking Turkey in an alliance. The assassination of the Russian ambassador Andrei Karlov, the New Year's massacre in Istanbul's Reina nightclub, economic manipulation and cyberattacks are all part of this phenomena. Considering that Turkey was the first country to loudly criticize and question the current world system and that the leader of this country is President Recep Tayyip Erdoğan, this situation makes a lot of sense.

Turkey is on its way to becoming a global power with its powerful army, underground and aboveground riches, population structure and economic size. It also enjoys a position in a geographical region that dominates the Asian, European and African continents. Erdoğan not only criticized and questioned the current system, but also undertook a struggle against all kinds of risks for change. This challenge saw Turkey punished by social movements, fraudulent corruption operations, assassination attempts, economic manipulation and a military coup.

These initiatives, which the barons previously employed successfully in many other countries, especially in Turkey in the past, were dismissed by the Turkish people, who believed, trusted and backed their leader, President Erdoğan. Hence, the global barons and their collaborators have been continually disappointed. Perhaps the most important reason underlying Turkey's exposure to such intense attacks is that no formation that Turkey, which is in a crucial position for the world politics due to the reasons we consider above, is not a part of will achieve its ultimate goal. If Turkey is on one side, the balance will change in favor of that side.

While these developments were taking place, the current system suffered the biggest impact from its strongest side: the U.S. elections and Donald Trump's successfully running in the presidential election. Because Hillary Clinton, the candidate of the world capitalist system, lost the election against the national capital of the United States, the system and its agents around the world are greatly disappointed.

Yes, the change to the current system is now inevitable. The founders of the new system will be Erdoğan, Jinping, Putin and Trump.

The first thing the current system and its representatives must do to prevent the changing system is disrupt this alliance, and the movements have been realized one by one.

With the careless acts by the Obama administration, such as the deportation of 35 Russian diplomats and its negative attitude toward the extradition of the Pennsylvania-based leader of the Gülenist Terror Group (FETÖ), Trump is left with an impossible legacy to repair. Lest we forget, FETÖ was behind the assassination of Russian Ambassador Karlov, it organized political and economic operations to topple the democratically elected government and perpetrated the deadly attempted coup on July 15 in Turkey. The administration of former President Barack Obama had a negative attitude toward the extradition of other criminals and put the American intelligence associations in league with a number of terrorist organizations. That legacy may be impossible to repair. For the global barons, America is a castle that should never fall.

On the other hand, it should be noted that the first serious reaction from the U.S.'s side to the global barons was the U.S. abstention in the U.N. over Israeli settlements. It is obvious that the conflicts within the U.S. will possibly continue to increase. Moreover, given the history of assassinations of American presidents, Trump is facing a serious threat to his life and this threat has been discussed loudly on many platforms, especially in the U.S.

Obviously Trump will follow a different foreign policy to Obama and Clinton. He said the global barons would not implement their desired economic policy and he will increase the cooperation and trade volumes with other countries instead of having problems with them. Moreover, it seems that he will work in harmony with Turkey except for on one or two points.

While the situation between the elements of the present global system and Trump is this way, there are many important developments in the framework mentioned above in China and especially in Russia.

It is unreasonable to think that similar chaos has not occurred in the past. What is happening today, and what is happening all over the world now is independent of the United Kingdom. The mastermind of all these happenings is the United Kingdom because the world's financial capital is London. Depending on the region, sometimes the bad cop is the U.S. and sometimes it is Israel, however the U.K. is always the good cop behind the chaos. It is the U.K. that manipulated the Arab Spring, which was formed by its own local dynamics, by using the U.S., and is in fact trying to set up countries through terrorist attempts via NATO.

The top intelligence services, the global barons and their local collaborators, who were unable to reach their aims with financial attacks, Gezi Park protests, assassinations, the National Intelligence Organization (MİT) crisis, the Dec. 17-25 operations and the July 15 coup attempt were attempts to prevent the transition from a parliamentary system to a presidential system as a last resort. They must prevent the presidential system because of a few reasons.

- With the presidential system, decisions will be taken more quickly and the possibility that a government will not be formed after an election will cease,

- Centralizing the state will prevent crises that are easily formed in the parliamentary system,

- The president, who will get over 100 percent of the vote, will appeal to every segment of society, and this will prevent the fragmentation and provide social cohesion,

- Turkey will play a more effective role with the presidential system in the newly formed alliance,

- Assigned bureaucrats will lose their power to rule elected officials,

- The link between the legislative and the executive branch will be broken and all kinds of exploitation and corruption will be prevented,

- Parliament and deputies will deal with tasks such as making, removing and changing laws,

That is why they want to prevent Turkey's transition to a presidential system. Because the government and president could not be toppled despite all the traitorous methods preventing the upcoming presidential system, which will make the country stronger is a vital mission for Turkey's enemies.