The beginning of a new regional grammar? 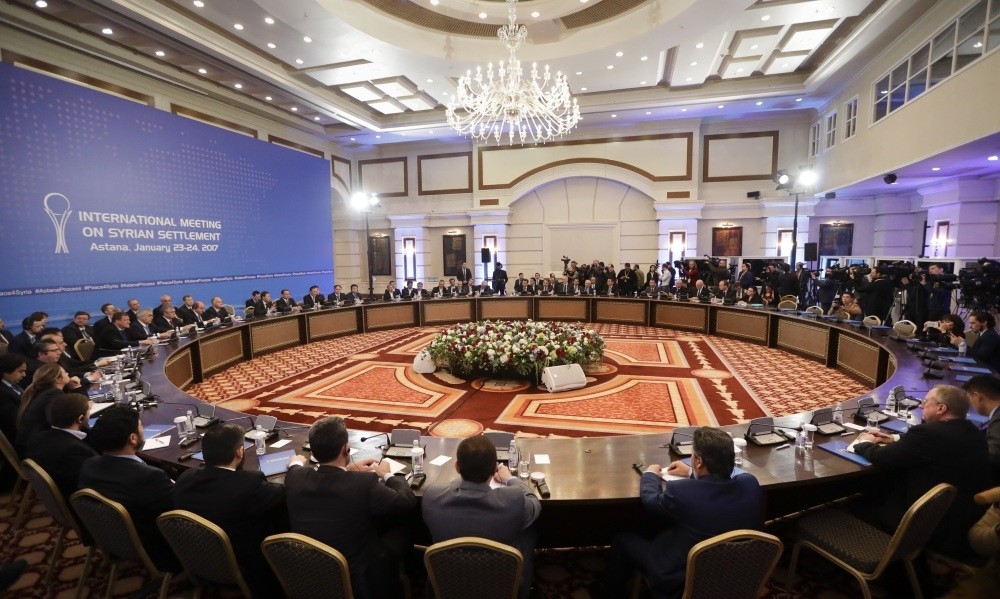 The Astana talks, which was indeed an attempt to find a solution to the Syrian civil war, concluded with a switch in the position of external and internal actors in the region and led to the reformation of the identity of the West and global affairs

The talks in Kazakhstan's capital Astana have ended with an understanding between Russia, Iran and Turkey to establish a trilateral mechanism to monitor the fragile cease-fire in Syria agreed to in December. The warring parties were not signatories of the final statement but agreed, in principle, to be parties to the U.N.-brokered talks to be held in Geneva next month.

While the short-term significance of the Astana meeting may not be decisive, there is little doubt that this meeting signals another tectonic shift in the geopolitical landscape, particularly in reference to the space being vacated by the retreat of the U.S. and U.K. into a nationalism of resentment as represented by the election of Donald Trump and the vote for Brexit. The white nationalists behind these retreats do not understand that xenophobia makes it difficult to carry out constructive leadership in international affairs. These tectonic shifts are already affecting regional affairs in the Middle East and the Astana talks signal this shift in three different aspects.

Firstly, the agreement that includes Turkey and Iran undermines the continued attempt by Riyadh to represent the Syrian civil war as a conflict caused by long-standing differences between those who follow Shiite schools of thought and those who follow Sunni schools of thought. It gives the government in Tehran the opportunity to escape the sectarian trap set by those who oppose the Islamic Republic and, more importantly, the Islamic Revolution. The Iran and Turkey co-sponsorship of the Astana agreement has the potential to shift the central divide in the Muslim Ummah from one based on sectarian differences to one based on differences between countries with accountable rulers on the one hand, and those with absolute rulers on the other.

Even the survival of Syrian President Bashar al-Assad's Baathist regime does not change the fundamental equation of the Astana agreement. For while Assad may still be in power, backed by Moscow and Tehran, he is a seriously diminished figure at the helm of a puppet regime reminiscent of the Salo Republic set up in northern Italy in 1943 by a deposed Mussolini, propped up by the soldiers of the Third Reich.

Secondly, the Astana agreement reinforces the crumbling of the Middle East built by the Sykes-Picot agreement which has been maintained by a succession of Western powers and their proxies. The Western European powers left the building a while ago, and what is becoming increasingly more evident is the end of U.S. indispensability. Not only can talks take place without the presence and voice of the U.S., but is also apparent that the U.S. is starting to think of itself in insular terms and appears no longer interested in being party to talks or spending its resources (political, economic and symbolic) in the Syrian conflict, an action which represents a turning around of over 50 years of military, political and diplomatic engagement with the region. It is no longer about reflecting back the image of the U.S. to the world. In fact, the Astana talks show the other side of the mirror of President Trump's inward looking approach. The obsession the West has about its place in the world no longer engages the rest of the world. In fact, the rest of the world is moving on.

Let us look back at the series of negotiations over Syria from the start of the conflict in 2011. The most recent were the talks in Geneva brokered by the U.N. that ended with little progress last year. Before these negotiations the U.S. tried to keep Iran out of the talks and then called on Tehran and Moscow to rein in the Assad regime. Further back, previous talks included the Arab League, Saudi Arabia, Egypt, China and, in 2015, Turkey – for the first time. Now think back to the peace plans and talks on the Middle East over the last 50 years – since the 1967 war. In all of them Washington's weight was undeniable and indisputable, not just in forging agreements when they were accomplished, but also in setting out the principles of any possible peace and drawing the plans about what such a peace would look like. Needless to say, the Soviet Union first – and Russia later – as well as specific European countries (e.g. France and the United Kingdom) have also been important actors in regional talks.

In Astana media reports have highlighted the new place Russia is occupying in the Middle East. Not only has Moscow's military intervention radically changed the balance of forces, clearly tilting it to the side of the Assad regime, but the Kremlin has also gained a space in all possible negotiations regarding a ceasefire, peace negotiations and humanitarian issues. It is hard to ignore the fact that Moscow has become a necessary actor in the region. However, the real evidence of a change in global affairs is given by the other conveners of the negotiations in the Kazakh capital: Iran and Turkey. The convergence between Ankara and Tehran as guarantors of the agreement enables them to have an undisputed and prominent space in regional affairs. The process of cooperation between Turkey and Iran is likely to be complicated ,and would require both parties to compromise on short term expressions of national pride for their long term interests.Thirdly, what the Astana talks point to is the weakening of the link between the West and the global society. China's President Xi Jianing, who emerged in Davos as the champion of globalization, delivered a speech – provoking both outrage and surprise in Western capitals – defending globalization and free trade, thus signposting the current transformations.

It looks like the relationship between the West and global affairs (be it trade, military conflict, prestige....) is being de-naturalized – to borrow the notion developed by the French theorist Roland Barthes. This means that an association that appeared necessary and has been regarded as only describing "the way the world is" is being dismantled, and, with this process, new ways of looking at the identity of the West and the identity of the world are being articulated. Astana signals a possible new grammar in international affairs that is sustainable and responsive, ultimately to the needs of local populations.