The value added of Astana talks on Syria 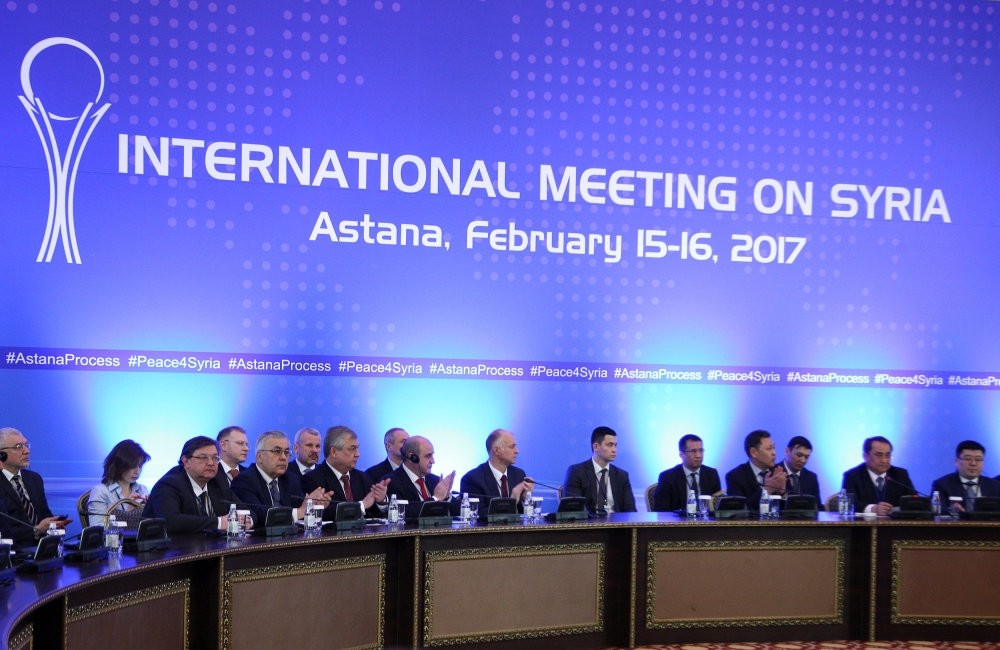 The Astana talks, which resulted in the emergence of a new alliance between Turkey, Russia and Iran in the Middle East, was the turning point for the new era of resolution in the Syrian civil war

A meeting that could have been simply hot air centered around the conflict in Syria ended up developing into a promising result-oriented process. The ground laying development took place at the International Meeting on Syrian Settlement in Astana on Jan. 23-24, 2017, jointly organized by Turkey, Russia and Iran, guarantors of the current cease-fire in Syria. The meeting inter alia agreed on a joint mechanism to monitor the cease-fire violations in an attempt to curb the bloodshed in Syria, and it was officially announced as established in a matter of days.

Following up on this, on Feb. 6-7, the Astana process guarantors, with participation from Jordan and the U.N., held a meeting in the frost-bitten capital of Kazakhstan, the first meeting of a joint operative group on Syria. It was focused on the matters of control over the truce established on Dec. 29, 2016, to become the longest lasting cease-fire in Syria as of now. The participants discussed the cease-fire regime, dealt with measures of prevention and control over occasional truce disruptions and looked into humanitarian matters and trust-building between the Syrian military opposition and the Assad regime forces.

On Feb.15-16 in Astana, the Syrian opposition and government officials met for the second time to reinforce the cease-fire ahead of a new round of U.N.-sponsored talks on Syria in Geneva on Feb. 23. The Geneva peace talks are recognized as the key channel for the Syrian crisis resolution and have as their final goal a broader political settlement to the nearly six-year conflict in Syria.

Turkey is the ultimate supporter of a peaceful resolution in Syrian. "Our goal is, no matter whether in Astana or Geneva, the completion of the peace process and the implementation of a fair and permanent peace deal as demanded by the Syrian people," said Deputy Prime Minister Numan Kurtulmuş on Feb. 7. Both Turkey and Russia consider the Astana process a contributor to the Geneva talks carried out under U.N.'s auspices. "The Astana meeting was not an alternative to Geneva, rather, it was a supporting process," said Foreign Ministry spokesman Hüseyin Müftüoğlu, while the Kremlin's spokesman Dmitry Peskov reiterated a similar position by calling the Geneva process a "prime route to peace in Syria."

True, regardless of a promising outcome, the Astana process has not contributed so far to the Syrian conflict settlement as it is. That is hardly surprising: After six years of spiraling enmity and bloodshed, a peaceful resolution does not come overnight. Making peace in Syria is a lengthy and painful process requiring a concerted effort from all the parties concerned.

The very fact of the International Meeting on Syrian Settlement taking place in Astana on Jan. 23-24 is an indisputable achievement. Its eventual organization despite prior skepticism and surrounding uncertainties marks the successful start of an additional format for the Syrian settlement. The meeting followed up on the peace truce agreed in the last days of December 2016 by Turkey, Russia and Iran – a tripartite alliance that was hardly imaginable just a year ago, but is a fait accompli and a driver for settlement in Syria today. This alone adds a new dimension to the ongoing process and generates a fresh hope for a constructive resolution of the Syrian crisis.

The choice of Astana for the meeting venue requires attention as well. The event being hosting by the government of Kazakhstan, which enjoys exclusive bilateral relations with Turkey, Russia and Iran, is another value added to the process. While acknowledged as an integral element of the U.N.-sponsored talks in Geneva, the Astana peace process signals a shift of the negotiation platform from traditional venues in Western Europe to Asia, to downgrade the value added to the Western effort that has proved itself increasingly futile.

ASTANA WAS THE FIRST CONCRETE MEETING

On Jan. 23-24 in Astana, for the first time ever, the warring field commanders making the Syrian military opposition and controlling de facto the situation on the ground sat down to negotiate with the Assad regime's representatives. Those who came to Astana differed dramatically from the polished politicians representing the Syrian opposition in Geneva at the U.N.-sponsored peace talks. This makes the Astana meeting special and gives one hope that peace will come to Syria. Technically, the talks were special as well and went through proxies, since the negotiating parties avoided direct contact and stayed in separate rooms in their course. Nevertheless, both the Syrian regime representatives and the military opposition leaders were present at the opening ceremony and listened to each other's welcome remarks in person – for the first time in six years. This may be interpreted as a meltdown and sign of readiness from both sides for a political resolution to the Syrian conflict.

Still, "sitting at an international meeting with the regime should not be taken as recognizing that regime," the Turkish side believes. The Turkish position in regard to Bashar Assad remains unchanged and clear: He does not have a place in Syria's future. This strongly differs from Russia's position, the Assad regime's ultimate supporter and strategic ally. Apparently, the Astana process is prone to stumbling blocks and pits and holes, and in the matters of a political solution in particular.

On Jan. 23-24 in Astana, the truce and cease-fire were the prime issues on the meeting's agenda. Its final declaration adopted by the guarantor countries supports Syrian sovereignty and territorial integrity, and reiterates that no military solution to the conflict is possible. The declaration established a starting platform that was further reinforced by the Astana meeting on Feb. 15-16 and armed Turkey, Russia and Iran with a duly grounded position to address participants of the Geneva peace talks scheduled for the end of February.

No solution to the crisis in Syria is feasible if its immediate neighbors are not involved, and Turkey in particular. Hardly anybody in the West has ever argued with that, though a silent consent was never enough to end the bloodshed. High-profile Western support turned out to be no more than lip service. By 2016, as a result, Turkey found itself alone sheltering 3 million Syrian refugees and carrying the burden of fighting Daesh on two fronts in Syria and Iraq.

The dire cause of events at its national borders made Turkey ally with Russia and Iran engaged in combat operations in Syria. The tripartite rapprochement turned out to be a time consuming and at times painful process marked by ups and downs, though rewarding by the end of the day: The Turkey-Russia-Iran alliance is a reality, the truce in Syria holds on and the Astana initiative has morphed into a process.

THE NEW ALLIANCE MEANS NEW FUTURE FOR THE REGION

In the context of the Middle East, the current alliance of Turkey, Russia and Iran are quite special, and as such, delicate, fragile and vulnerable to external impacts. Built on exclusive bilateral ties between Turkey, Russia and Iran, it took its present shape without immediate U.S. involvement. The U.S. was not engaged either in the decision making or the organization of the Astana meeting, though it attended the event as an invited guest and observer. This turn of events does not make the U.S. happy. It is not happy with its state of relations with Turkey either, while it does still consider Turkey its main strategic partner in the Middle East. According to U.S. State Secretary Rex Tillerson, "because we didn't properly coordinate, President [Recep Tayyip] Erdoğan turned to Russia. We need to convince him that his sustainable ally is the U.S., not Russia."

At face value, Turkey-U.S. relations are duly grounded and well established, and in the military field in particular. The only Muslim NATO-member country, Turkey has the second largest army in the alliance. Nevertheless, bringing back to normal the Turkey-U.S. alliance once fiduciary relations could turn sour this time. The thorny issue is the U.S.'s support in Syria to the Democratic Union Party (PYD) and its military wing the People's Protection Units (YPG), that are the Syrian branches of the PKK terrorist group. The Turkey-U.S. divergence in positions on Iran does not make their relations better either. Openly hostile U.S. rhetoric on Iran and naming it a "global terror state" makes a sharp difference with the more balanced Turkish approach. Turkey has always been careful in avoiding a direct clash with Iran and made an effort to fix the ties between Tehran and the West.

The future of Russian-U.S. relations remains dim as well. The Russia-U.S. interaction is indispensable for the Syrian settlement alone, if the Trump administration is serious about putting an end to the bloodshed in Syria. At face value, the U.S. supports Russia's peace effort in Syria. Speaking to journalists on the sidelines of the G20 meeting in Bonn on Feb. 18, Russian Foreign Minister Lavrov confirmed this once again, while mentioning the readiness of the Trump administration to "support Syrian peace talks in Astana." Nevertheless, the recently acknowledged U.S. position on Iran could well become a stumbling block for both mending the fences with Russia and rendering support to the Turkey-Russia-Iran-sponsored Astana process. Russia and Iran enjoy exclusive relations of co-operation and in the nuclear field in particular.

The emergence of the Turkey-Russia-Iran alliance is a new Middle Eastern reality and it hardly meets traditional U.S. interests in this region. It means that the alliance resilience is to face a test in the nearest future.