Burden of the Feb 28 postmodern coup 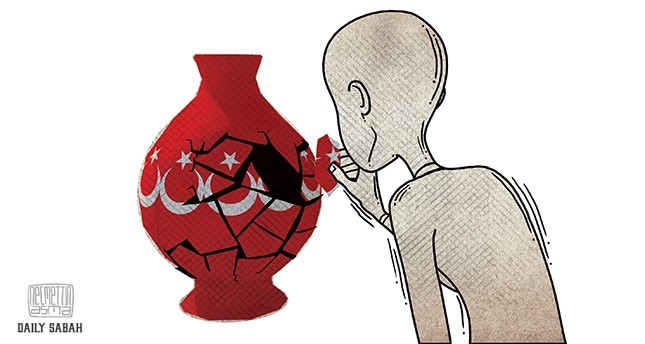 The Feb. 28 postmodern coup was one of the most discriminatory moments in Turkish politics, causing many, who come from conservative or religious backgrounds, political, economic or social suffering due their identities

Today marks the 20th anniversary of one of the most unforgettable moments in Turkish Republican history, the Feb. 28, 1997 military coup. It left severe wounds in Turkish democracy, toppling the democratically elected government, physically oppressing the conservative and religious parts of society, and causing many to lose their jobs or educational opportunities.

The Feb. 28 coup refers to the intervention into the democratic order and the decisions taken by the National Security Council (MGK) in an emergency meeting, which was headed by the then-President Süleyman Demirel at the beginning of 1997. The Feb. 28 coup, a historical breaking point in Turkish politics, damaged Turkey's democratic atmosphere due to interventions by civilian actors in the state who actually turned out to be in the military's tutelage circles.

Demirel, a symbolic figure in Turkish politics that was subjected to military interventions many times during his prime ministry years and jailed by the military administration, unfortunately this time sided with the putschists. Expressing his conviction for the military coup and the tutelage regime after Feb. 28, Demirel said that the post-coup regime would last "a thousand years."

What Demirel did by supporting the coup was betray the Democratic Party (DP), the legacy of late Prime Minister Adnan Menderes, to the True Path Party (DYP) which was the partner of the then coalition government of the Refahyol, to the religious right-wing masses who had supported him without hesitation and to his 40-year-old friend Necmettin Erbakan, the then prime minister.

PREPARING THE PROCESS OF THE MILITARY MEMORANDUM

The Feb. 28 military coup is also called the "postmodern coup" because the military did not directly take full control of the government but made preparations for the coup process such as pushing the media, public officials, judiciary members, academicians, non-governmental organizations and economic actors against the Welfare Party (RP), the conservative party that won the local administrations first, and then the leader of the party, Erbakan, the prime minister at the time.

However, the most influential actors that affected the coup process were unarguably the media bosses.

The term "reaction" was another extensively used term; it was undoubtedly the most used word during the process of the Feb. 28 coup. This term, which means "going past times," was used as a tool to push the soldiers to take measures against the RP in the name of protecting the "establishment values of contemporary life," because according to them, the members of the RP were the "enemies of contemporary Turkey."

The preparations for the process of the coup were about to be finished, when finally, a clandestine grouping named the West Study Group (BÇB), was established in the MGK to manage the relationship between the military and the civilian forces.

The Feb. 28 military memorandum was the final intervention by the fascist bloc in the late 20th century, that for years tried to divide society into two views, Islamist and secular, and stand against the democratic responses of the people.

The conservative and religious people, who were labelled as "reactionary and Islamist," were targeted and accordingly Turkish democracy was hurt.

The RP, which came to power with a majority vote, was overthrown from government thanks to the political games played by Demirel and it was later closed by the Constitutional Court. This caused the democracy in Turkey to collapse.

Naturally, the later political figures in the governments after the coup failed to govern the country and it resulted in endless and increasing instability. In the end, the Turkish state was hugely damaged, and it entered the 21st century in a catastrophic manner due to political depression and an economic crisis.

SOCIAL AND INDIVIDUAL DEVASTATION OF FEB 28

While the perpetrators of the military memorandum thought they had solved the "problem" in politics, the warning bells for the end of their tutelage started to ring. According to them, targeting the National Vision Movement, which was the movement for the conservative and religious people who were oppressed during the coup, would be the solution to end the "problem."

Yet, what they did by attacking the movement was create a renewed and stronger political class that has yet be stopped in the elections that have since followed: The Justice and Development Party (AK Party) government.

Conservative politics, which was led by the then-head of the AK Party, Recep Tayyip Erdoğan, abandoned the "appearance" of the "Islamic rhetoric." It gained a power that could lead society in the political arena in the direction of its historic goals.

Nevertheless, unfortunately, the decade-long Feb. 28 process, from February 1994, when the RP began to win local administrations, to 2002, when the AK Party was founded and started consolidating its power, caused great social and individual devastation.

At the beginning of the 1990s, despite the crises experienced in the center right and left, the National Vision Movement under the leadership of the RP could reach the masses by leaning on democracy, civil society and renewing market system discourses. Particularly, the young masses had shown great interest in the party/movement.

However, the system was against the right to education, freedom of belief, utilization of public service and entrance to public service (from which conservative or religious individuals were banned) and naturally the tensions between the masses and the system increased.

The state under the discriminatory system attacked the conservative and religious people in the name of a "contemporary society."

The pressure in universities was not only limited to female students, such that conservative or religious scholars were dismissed from the universities or were exposed to mobbing by "contemporary defenders."

On the other hand in the judiciary, female lawyers with headscarves, who were not even public officials, were banned from practicing law by the Bar Associations and they were kicked out of the court rooms by "contemporary-defender" judges.

Nothing was different in the military: Candidates for military schools who had a family member with a headscarf were not accepted by the schools, even if they had high marks in their military exams. A number of officers and non-commissioned officers were dismissed from the army because their wives wore a headscarf, in a decision made by the Supreme Military Council (YAŞ).

As a result of the pressure on them, some members of the army had to hand over their economic rights and were forced to resign early.

The worst example for this sequence of inhumane exclusion was that the mothers of soldiers who wore headscarves were not allowed to attend the oath ceremony of their sons who were serving their country.

The pressure on their lifestyle led many people to lose their profession, their health, their lives and their families. Many conservative or religious citizens were forced to continue their lives by experiencing psychological pressure while dealing with economic troubles. Many students had to continue their education abroad, with great difficulty. The equivalents of the diplomas they received were canceled by the Higher Education Board.

As a result, the politics that started in the 1990s ended worse than it had begun. Political, economic, legal, and social life went through an irreparable experience.

Share on Facebook Share on Twitter
Previous in Op-Ed A curious thing is emerging in Washington: A remarkable parallel in... Next in Op-Ed If the ‘yes' vote wins in the April 16 referendum to reform the antediluvian...
DAILY SABAH RECOMMENDS