What are the potential effects of a presidential system on the economy? 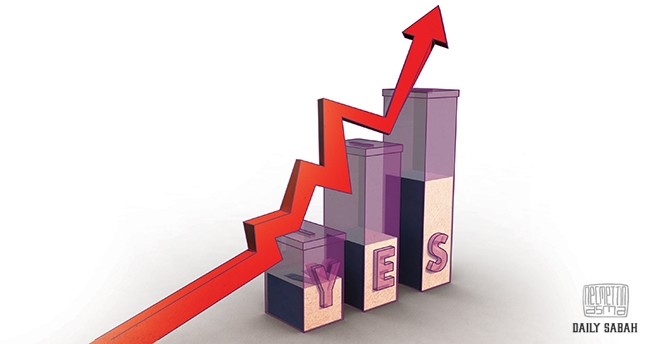 If the ‘yes' vote wins in the April 16 referendum to reform the antediluvian constitution and governing system in Turkey, it will pave the way to boost the country's economic growth

Turkey is going to vote on whether or not to create a presidential system on April 16 as part of the constitutional referendum. The new system will bring structural changes for the economy; however, these changes have not been discussed in-depth.

It would have been a good idea to look at examples of presidential and parliamentary systems with a cross-country analysis and come to a universal result about which system is more beneficial to an economy. Unfortunately, such observations and analyses are not possible as there are economic success stories in favor of both systems. On the one hand, for example, the U.S. and South Korea are advanced economies governed by the presidential system, and China has achieved very successful economic growth over the last two decades under a presidency.

On the other hand, the U.K., Germany and Japan are counter-examples as they are advanced economies under parliamentary systems. Furthermore, underperforming economies also differ in terms of their government types. Some claim that they find those who have parliamentary system are performing better, with approximately 0.6 and 1.2 percentage points more in annual economic growth than those who have presidential systems. However, as they explained, this correlation does not necessarily mean causation.

Furthermore, they could not provide a supporting theoretical explanation for the empirical results and failed in explaining the counter-examples. Overall, it is safe to say that the presidential system, like every other governing system, does not have an effect on the economy per se. However, given the right environment, the presidential system can play a facilitator role in economic development better than others as it protects political stability, enables the optimum level of cooperation between state and business circles, increases state capacity, relaxes the complexity of the bureaucracy, and thereby accelerates the decisionmaking process.

In terms of the pre-conditions for the environment, in order for the presidential system to have positive effects on growth, a country needs to have internal and external dynamics that push the government to promote growth. The main factor that brought success to the Justice and Development Party (AK Party) in Turkey and kept it in power for 15 years with democratic elections was successful economic policies. This, actually, is the point missed by the opposition, which constantly emphasizes the fear of a potential authoritarian regime. The AK Party has always gained its legitimacy through the support of the people, not from the military, and it will continue to need high economic performance to protect its place. In this context, Turkey's current environment is of course different than, for example, Sub-Saharan African countries, which passed to the presidential system in order to justify their current authoritarian regimes through rigged elections, with leaders sometimes even getting 99 percent of the votes.

This is why the environmental conditions before the presidency matter. Apart from internal incentives, Turkey's external threats also create incentives for the government to promote growth by any means necessary. Deteriorating relations with the European Union, fluctuating ties with Russia and an implicit fight with Iran in the region push Turkey to survive in a more competitive international realm. Overall, both internal and external environments need to be favorable in order for the presidency to be an impetus to growth. So the AK Party will be eager to extract all the potential economic benefits coming from the new system, as the survival of Turkey relies heavily on the recovery of the economy.

Contributions of the new system

After a brief explanation on the necessary pre-conditions, now we can evaluate how the presidency will bring higher growth levels. Firstly, as argued by many AK Party politicians, there will not be any more coalition governments that undermine stability. Turkey experienced governmental crises in the 1990s when the coalition parties fought with each other like Kilkenny cats. With the new system, the one that gets the absolute majority of the votes will take office. So this will prevent coalition governments and bring about political stability, which means increased predictability in financial markets, lowered political risks, ensuring a safe business environment and encouraging capital for more investments. This is actually the best way to keep the capital inside the country and attract foreign investments in an environment that pushes the capital outflow to the U.S. from developing countries. Political stability, at least in the medium term, also means transformation of hot money to real investments.

Secondly, as President Recep Tayyip Erdoğan explained in a meeting with businessmen, the complexity of the bureaucracy will be eased through a constitutional change. The removal of the multi-layered bureaucracy will eliminate the barriers that prevent the coordination between the state and businesspeople. Being "optimum" in this collaboration is also important because too much intervention may pave the way for corruption, and weak cooperation may produce inefficient results for growth. In the parliamentary system, Turkey has been in relatively weak cooperation with business, but a presidency opens the way for an optimal relationship with the business world through less sophisticated bureaucracy. Furthermore, the elimination of a strict bureaucratic structure will remove the unnecessary transaction costs in the market. It will also bring a rapid decisionmaking mechanism that can save the economy from uncertainties and enable businessmen to plan for longer periods.

Thirdly, the consolidated executive power will increase state capacity and in turn, the state will be able to take more responsibility in implementing development strategies as it will be more independent from economic pressure groups. The pressure groups try to exploit state resources and channel them in a way that is more favorable to their businesses. This, depending on the production type of the group, can be beneficial or harmful to growth. Up until now, economic resources have been allocated to less strategic and non-tradable sectors, like construction. However, creating a powerful executive body enables the state to channel economic resources into the strategic sectors that can be pivotal for growth. Another point is that developing countries usually have low levels of saving rates, a reason why they are heavily dependent on foreign money inflows in order to invest. However, increasing state capacity may enable the state to force people to increase their saving rates by true management of the financial system, and eventually increase investments.

In conclusion, if the AK Party wins the referendum in April, the presidential system will open the way to rapidly boosting economic growth. Considering the current environmental conditions, increasing the ability to move will give room for the government to pursue ambitious development strategies.

* Selim Yaman works for TRT World. Yaman received his BSc from the Economics Department at Boğaziçi University. Currently, he is a graduate student in Political Economy of Development, SOAS.
Last Update: Mar 21, 2017 11:27 am
RELATED TOPICS