April referendum is a big step for Turkey's democratization 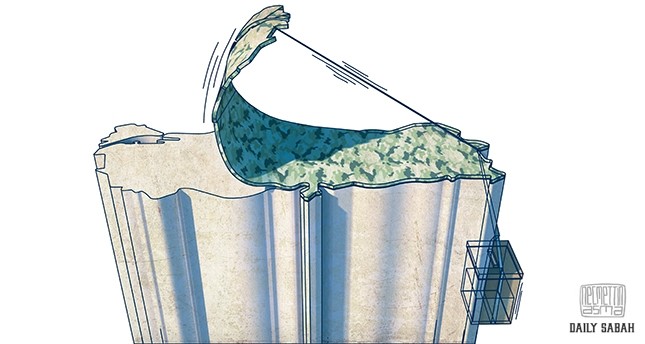 Change to the presidential system, which will help Turkey remove the military and bureaucratic tutelage in its state mechanism, is a great opportunity for the future of the country's democratization process

Since its establishment, the Turkish Republic has concentrated more on the so-called modernization project that eventually set the country on an irreversible course to Westernization. The 20th century was perhaps the most arduous period for the Turkish people: A transition period that brought the nation from a traditional empire to a modern nation-state. The young Republic should have made more rigorous attempts at "democratization" rather than just taking, imitating, and applying some modern and democratic characteristics from European states; namely, the political, judicial, cultural and social systems of their Western counterparts. While the issue is fraught with its share of debates on the possibility of "non-Western modernization," the experience of democratization itself is a long and tough process that must be experienced by the individual country, as attempts to "copy and paste" the democracy of Western nations onto the blueprint of the young Republic is doomed to failure.

I personally believe that the democratization process of Western societies is a totally random process; that is to say, certain events led to sometimes intended but otherwise entirely unexpected results. Thus, seemingly irrelevant developments have led to the current state of democracy in many developing countries. Yet, it does not mean that we have come to the "end of the world" with the triumph of Western-style, participatory democracy as was suggested by Francis Fukuyama; rather, it is a process and many events occurring one after another will proceed to a new "end-result."

NEED TO RENEW THE WHOLE CONSTITUION

The Turkish Republic is still at the beginning of a journey of democratization, if you can consider the process a route. There are certain factors for Turkish infant-like behavior in this process; first, it has been realized very late that democratization needed to grow on Gramscian organic soil. No society could be transformed by some alienated political elites; in the Turkish case, most of the social and cultural reforms did not fit the Turkish form. Every time the public complained and rejected this imposition, the founders of the Republic warned them through various means like military coups and other punishments. For these self-appointed guardians of the Republic, the Turkish people could never deserve a tailor-made democracy produced in their land. After the painful 20th century, the public grew more hopeful with the strong Justice and Development Party's (AK Party) successive governments with its many amendments in the Turkish legal system that created breathing space for democratic growth. Of course, the best amendment would have been the change of the Constitution altogether.

Yet, the governing AK Party has been intimidated by the attitudes of the political parties in Parliament, as these opposition parties have long been rejecting all attempts for a more democratic constitution. On the other hand, the night of the terrorist coup attempt on July 15 of last year was a show of the public consensus and most importantly, that night provided the necessary social contract for a new constitution. The people who defended democracy on the streets of Istanbul and Ankara, and other Turkish towns, came from various political ideologies and ethnic groups. In my opinion, the new constitution was written on the streets that night but that golden opportunity was lost for various reasons. So, the government brought a new proposal to the people: A potential face lift for the old and worn out constitution.

In little more than a month's time, these amendments will be brought to a referendum. Instead of proposing to change the entire constitution, the AK Party is offering some changes in the Turkish political system; especially with regard to the president's role in the executive, which has been challenged since the popular election of Recep Tayyip Erdoğan in 2014. Previous presidents were elected by lawmakers; either party-affiliates from within Parliament or, in most cases, the military generals who launched a military coup in a bid to be elected president.There have been some 18 changes made to the articles of the Constitution. These changes eventually lead to the amendment of the constitutional role of the president, which is why there has been nearly no debate on the individual changes of the proposed version. Foreign individuals and bodies are, unfortunately, only hearing not very relevant discussions on the amendments. They hear for example, that the "yes" vote would take Turkey into a one-man authoritarian regime or the "no" vote would cause political instability in the country.

MILITARY AND BUREAUCRACY VS. DEMOCRACY

Many people are missing some important changes, especially in terms of democratization, by putting down the military and the bureaucratic tutelage that Turkey has suffered for nearly a century. Due to several military coups, which happened in virtually every decade of the Republic after 1960, in addition to many admonitions the military, civilians have been too afraid to step out of their bounds and take on the tutelage forces. There were several "red lines" for the soldiers; namely, secularism and multiculturalism. If and when they felt that these issues were in danger, they would immediately interfere with politics. So far, no one has been able to question the reason why there were two members in the constitutional court coming from the military high courts (Article 146) or even, why the military had any right to be in civilian trials? The amendment offers a change in this case and there could only be some "disciplinary" courts set up for the petty crimes committed among military personnel.

In other words, military personnel would be prosecuted in civilian courts and not vice versa. Another issue is the change of appointments in the higher courts. The opposition claims that this method of appointment could endanger the impartiality of the legal system. According to the proposed change in Article 159 of the constitution, the president will have the authority to appoint only four out of 13 members from among judges and prosecutors: Seven members will be appointed by Parliament while the remaining two members will be the minister and the undersecretary. It is a totally groundless argument for a member of a high court to lose his or her impartiality after the appointment by the president since there are many internal mechanisms in place to check their objectivity. Yet, in the past, we experienced that some members of the superior courts or elite bureaucrats have tried to play the role of the opposition by attempting to prevent some governmental appeals. If the majority of the people elect a president, she or he should be able to appoint the staff they are going to work together. If they fail to persuade the voters, they will lose their post in the next elections.

* Professor of anthropology in the Department of Radio, Television and Cinema at Marmara University
Last Update: Mar 13, 2017 6:28 pm