A challenging reboot in Turkish-Russian relations 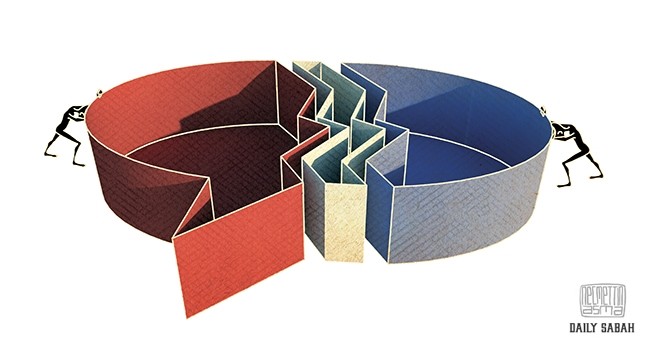 The future of Turkish-Russian relations, which has gained much ground since the unfortunate jet crisis in 2015, looks brighter than ever

In less than a year, Turkish-Russian relations have experienced a dramatic change. Bitter rhetoric and confrontation have been replaced with multi-profile cooperation that is increasingly being extended to the military interaction in Syria. The ground for this development started in a meeting between President Recep Tayyip Erdogan and Russian President Vladimir Putin on Aug. 9, 2016, in St. Petersburg that put a full stop to the seven-month rift produced by the jet crisis of November, 2015. Since then, the presidents have met several times on matters of significant importance for both Turkey and Russia, as well as the world at large. Regular communications and meetings have become common routine for the Turkish and Russian high-ranking officials as well. This reflects a strong will that is present in Turkey and Russia to bring back their full trade and economic cooperation, and to enrich it with strategic dimension.

The next presidential meeting scheduled to take place in Moscow on March 9-10 under the framework of a regular session of the Turkey-Russia High Level Cooperation Council, where they are expected to consider a broad range of matters. Among other things, the parties may look into Turkey's interest in purchasing Russia's top-of-the-line S-400 surface-to-air missile systems in order to better secure Turkish airspace. Erdogan and Putin are meeting at a crucial time when the future of the Syrian peace process greatly depends upon their good will and mutual understanding.

Economy as a mighty driver

In the field of trade and economy, Turkey and Russia are natural partners. Since the '70s, Russian gas sales to Turkey have been the backbone of Turkey-Russia inter-state interaction. After the Turkish-Russian relations reboot in August, 2016, a once flourishing trade and economic cooperation got the best chance of getting back on track. Cooperation in the field of energy received an immediate boost, and the projected TurkStream gas pipeline started instantly gaining momentum, while the final and long-awaited arrangements got smoothly secured for the Akkuyu nuclear power plant construction. Experienced and dynamic work resulted in the quick approval of the ground laying agreements for a mega-pipeline that often takes years to reach.

On Oct.10, 2016, in Istanbul, Turkey and Russia finally signed an intergovernmental agreement to start the construction of the TurkStream pipeline to deliver Russian natural gas to Turkey, and possibly further to Europe, by crossing under the Black Sea. By March 2017, construction of the land section on the Russian territory has nearly finished, and the laying down of the submerged part is due to start in July as originally planned. When completed, the first line of TurkStream will annually supply the dynamically developing Turkish economy with an additional 17.5 billion cubic meters (bcm) of Russian natural gas. While beneficial for economic prosperity, the development will give a fresh spark to the never-ending debate about Turkey's overdependence on the Russian source of gas, while making the Turkish-Russian interaction more challenging.

Trade and economic ties turned into the main driver of Turkish-Russian intergovernmental relations at the end of the '80s. While deliveries of Russian gas continued as per the Turkish-Russian foreign trade agreements made in the '70s, a new trading practice — nicknamed "shuttle trading" — started to emerge. The launch of Gorbachev's perestroika based on reforming the collapsing Soviet Union into a market-oriented economy, has brought the USSR a massive employment loss coped with a collapse of consumer goods production. Jointly they generated a shuttle trade phenomenon, allowing millions of jobless Russians to rush to Turkey and buy consumer goods urgently needed in Russia that they could resell back home at open bazars, markets and retail outlets. Regardless of its primitive nature, this phenomenon kept boosting Turkish-Russian people-to-people economic relations for years, all the while providing the modest-income Russians with their basic necessities.

In the meantime, Turkish-Russian interstate relations were on standby, with the Russian political elite largely focused on interaction with the West. In 2004, President Putin became the first Russian state leader to pay an official visit to Turkey and attended the inauguration of the Blue Stream pipeline — an event initiated to a greater extent by the Turkish side. The last before Putin was the USSR Supreme Council Chairman Podgornyi, who paid a formal visit to Turkey back in the '70s.

President Putin's visit helped boost Turkish-Russian trade and economic relations, which focused on Russian gas, Turkish fruit and vegetable exports, flourishing tourism in Antalya and booming Turkish construction in Russia. By the time of the jet crisis of November, 2015, more than 4 million Russians were travelling to southern Turkey annually for vacation, surpassing the long-time German champions in tourism. Turkish-Russian annual trade turnover had jumped to $32 billion by 2014 in a dramatic increase from $6.8 billion in 2003. The figure is expected to go as high as $100 billion by 2023.

If not for the calamities in the Middle East, Turkish-Russian relations might have continued to develop steadily with the speed and direction of the two countries' economic needs. Sadly, things experienced a dramatic setback in November, 2015, when a Russian SU-24 fighter-bomber was shot down by the Turkish air force over the Syrian border. It took the two country's leaders seven months to reconcile, during which the surrounding world changed dramatically for the worse and conflict resolution in Syria became a priority on the presidential agenda.

Strategic dimension is a new reality

By August, 2016, Turkey was left to carry the main burden of the fight against terror in both Syria and Iraq, while hosting three million Syrian refugees. The U.S. backing of the Democratic Union Party (PYD) and its military wing, the People's Protection Units (YPG) — the Syrian branches of the terrorist PKK group —became increasingly evident and damaging to Turkey's effort to clear northern Syria of the militant groups affiliated with the terrorists. The reluctance of the U.S. to fully support operation Euphrates Shield continues to negatively affect Turkish-U.S. relations.

Furthermore, the U.S. and EU reactions in the aftermath of the July 15 aborted coup attempt greatly disappointed the Turkish government, which perceived the response to represent a lack of Western support to Turkey when it was needed the most. In contrast, Moscow's attitude towards Turkey's struggle and President Putin's support against the coup attempt has been greatly appreciated by the Turkish government.

All this, coupled with a successful reboot of Turkish-Russian relations, has caused Turkey to join forces with Russia to combat terrorism and restore peace in Syria. By doing this, Turkey and Russia have taken a decisive lead in the Syrian settlement regardless of their divergence in approaches to certain matters of regional importance. The main stumbling blocks remaining are Russia's support of Bashar Assad as the leader of Syria — whom Turkey does not warrant any place in Syria's future — and its tolerance of the PYD, recognized by Turkey as a terrorist organization and extension of the PKK.

Since September, 2015, Russia has delivered airstrikes on terrorist positions in Syria, saving the Syrian army from a virtual collapse and ensuring its advance in fighting Daesh and restoring control over its territory. The takeover of Aleppo was a major victory for the Assad regime to crucially change the power balance in favor of the Syrian army and grant more leverage to Russia in the Syrian resolution.

For Turkey, the dire situation in Syria is a matter of national priority. Currently, the Turkish-launched land operation in Syria continues cleansing terrorists from strong-holds, such as al-Bab, and is supported by the airstrikes of the U.S.-led coalition as well as Russia. Turkey believes that the safe zones in Syria could ease the humanitarian crisis there and appreciates the Trump Administration's support voiced for their establishment. Russia, on the other hand, is quite concerned with the safe zone initiative, making it another matter of potential disagreement with Turkey.

EFFECTS OF THE SYRIAN TRUCE TALKS

Still and regardless of apparent divergences, Turkish-Russian interaction in Syria has turned into a mighty contributor to the Middle East settlement. The very fact that such diplomatic and military cooperation between a N.A.T.O. member, Turkey, and the N.A.T.O.'s greatest opponent, Russia, has been established requires the highest praise for both parties.

The most valuable product of this interaction so far in the Turkish-Russian initiated tripartite alliance with Iran is the successful brokering of a cease-fire in Syria in the last days of December 2016. The truce, though fragile, has become the longest lasting in Syria since the conflict began. As such, it has served as a background for the launch of the Astana process on the Syrian settlement initiated by Turkey, Russia and Iran. After a year break, it contributed to convening a new round of U.N. sponsored intra-Syria talks in Geneva from Feb. 23 to March 3, while establishing a joint platform for their tripartite alliance to address the meeting participants. The efforts have finally resulted in securing the warring parties willingness to deal with the issues of political transition as listed in U.N. Resolution 2254. This is a breakthrough, and it gives a hope for a long-lasting peace in Syria.