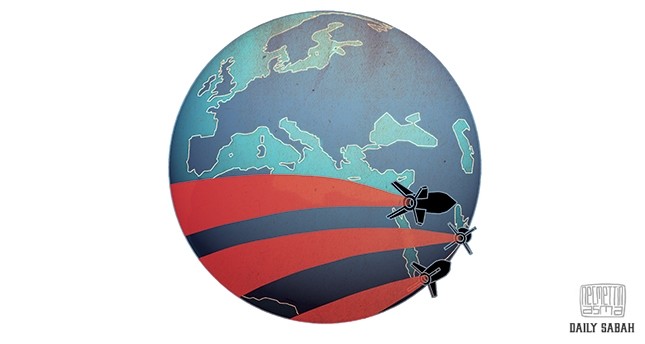 Although Trump has criticized his predecessor Obama on numerous occasions for his decisions on U.S. foreign policy concerning the Middle East, he is currently repeating the former president's mistakes

Whether we like it or not, Obama's policy created a de facto threat to the stability of the entire region. His deliberate hesitation, poor choice of allies, intermingled priorities and even lack of a genuine comprehensive policy for the conflict in the Middle East eventually led to the rise of new generations of radical extremists, failed states and a typical fertile platform for unrest and turbulence.

During the U.S. presidential election, Middle East observers were expecting a third Obama term had Hilary Clinton won the election or an exceptional, atypical and unpredictable turn under Donald Trump. Not for long: Everybody held their breath to find Trump in the Oval Office. Now, it's time for 45th U.S. President Donald Trump to put his words into action.

To do that, Trump has a host of challenges. Most importantly, he is perceived as an outsider to the establishment. In other words, he doesn't have the necessary qualified team able to radically affect the chain of decision-making in one of the most well established democracies in the world.

Divergence vs. convergenceTrump's Middle East strategy is baffling and inexplicable. He relentlessly declares that his first priority is to defeat Daesh and that he believes that either Russia or the Assad regime can achieve this goal. However, it's unequivocally evident that both Russia and the Assad regime are not fighting Daesh at all. That's why it's believed that Trump's cozy embrace of Putin means he won't make any tangible difference in ending the carnage in Syria.

His predecessor, Obama, believed that the only competent ally able to deter and crush Daesh were Kurdish militias. Obama's administration supplied its proxies (the Syrian Democratic Forces (SDF), which is dominated by the Peoples' Protection Units (YPG) terrorist group) with anti-aircraft missiles. The legitimate question is "Does Daesh have aircraft or warplanes?"

Also, the U.S. built a military airfield in northern Syria between the cities of al-Shadadi and al-Hasakah, which are controlled by pro-PKK militias, that sits on a major oil and gas field. The U.S. Air Force made active use of the air base and targeted a number of bridges close to Daesh-held territories.

Even if Trump genuinely believes that Obama's policy to combat Daesh has been a big failure, he won't be able to change it fundamentally. Trumps knows well that nothing outrages Turkey, his main regional ally, as him militarily backing a group that is not only hostile to the Turkish Republic but also has the passionate aspiration to have an autonomous statelet in parts of Turkey and northern Syria.

It seemed that Trump was reading from the same page of Recep Tayyip Erdoğan's book; he agreed to act together with Turkey in Syria in al-Bab and Raqqa. He's also sent positive signals regarding the Turkish proposed safe zone in northern Syria. However, his actions on the ground indicate that he is either naïve or not in control.

On the other hand, since his triumph, Trump has not taken any particularly serious steps against the Gülenist Terror Group (FETÖ) that orchestrated the coup attempt on July 15. This would undoubtedly cast even darker shadows on bilateral relations and deepen tensions further.

I've always wondered about the unique American style of governance. Even their terminology is more business-oriented: They use administration instead of government, secretary instead of minister and department instead of ministry. Trump has reiterated that U.S. allies in the Gulf should pay for the security protection that the U.S. provides them. Similarly, Obama used the term "free riders" in Jeffrey Goldberg's piece, "The Obama Doctrine," to describe his Arab allies.

Everybody knows that the Gulf States pay for their security protection implicitly and explicitly. The first and biggest importer and investor of massive U.S. weapons are the Gulf countries. They also invest indirectly through their real estate investments in the United States, national infrastructure bids, and exclusive contracts to giant American firms.

Trump reckons that Saudi Arabia threatened to pull $750 billion in U.S. assets if Congress passed the controversial bill that would make Saudis liable for 9/11-related lawsuits. As a businessman, he won't create economic problems with his high-profile customers, that's why his first wide-ranging and controversial travel ban excluded citizens of the Gulf countries and froze new visas for Syrians, Iranians, Libyans, Somalis, Yemenis and Sudanese citizens. Iraq has recently been exempted.

Strategists and politicians in the Gulf countries believe that Trump will be harder on Iran than Obama. Trump publicly called the deal negotiated by Obama's team on Iran's nuclear program a "disaster" and "the worst deal ever negotiated."

However, apart from wishful thinking, any substantial change in U.S.-Iranian relations in a conceivable future is implausible. By the same token, a strident deterioration that might lead to military conflict is similarly dubious.

Most likely, Obama's deal will stay intact and Trump won't be able to unsettle the entrenched forces and institutions that perpetuate the two countries' meticulous Cold War. When it comes to rhetoric, Trump is also exceedingly critical of Iran's provincial role to the point that his oratory might copycat the rhetoric of the Saud dynasty and the leaders of Israel.Liquidating the Palestinian causeThe U.S. president has succeeded in boosting his pro-Israel credentials by proclaiming the relocation of the U.S. Embassy to Jerusalem. Trump, venturing into the apprehensive world of the Palestinian-Israeli conflict, is brewing a strategy that would primarily involve Saudi Arabia, Egypt and Jordan to find a final solution to the chronic deadlock.

Over his term, Obama, Israel's "unsung protector," has not endorsed the passage of any Security Council resolution explicitly critical of Israel. Since 1967, every other American president allowed resolutions holding Israel accountable for its actions toward the Palestinians and other Arab countries.

Trump presents himself as the staunchest supporter and friend of Israel. It has been evident that his strategy typically mirrors the thoughts of Israeli Prime Minister Benjamin Netanyahu. Both Trump and Netanyahu believe that this is the right time to establish a de facto alignment with Sunni Arab countries that live in a state of panic from the overextension policy of its sectarian rival Iran.

The Sunni Gulf countries are preoccupied with the hegemony of Iran over the region; they won't be willing to think about the Palestinian cause. Israel started to be perceived as an indispensable ally that would help them mobilize the Trump administration against the Iranian foe.

It won't be far off when everyone is aware that Obama and Trump are two sides of the same coin.